We continue our look back at Steelers' former draft classes with a glance back at 1999. Quite a bit less fruitful than the previous year. I guess you don't draft two potential Hall of Famers every year though. Then again, this particular year's draft was super sweet if only for the acquisition of defensive stand out and all-world locker room guy, Aaron Smith. More or less a re-post from last year, with appropriate updates added where needed. -Blitz- 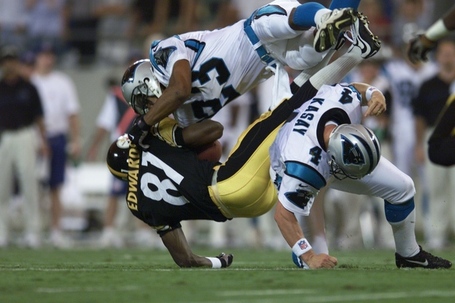 Edwards has to be considered a bust for the Steelers. It sure didn't seem as though his career would turn out that way though, not after his first year at least in 1999. That year, Edwards played in all 16 games, starting 6, and hauled in 61 catches for 714 yards and 5 TDs. He even fared well returning punts - returning 25 punts for an average of 9.4 yards per return. Edwards never took the next step forward though with the organization...actually that's a huge understatement. Year one was by far Edwards' most productive in Pittsburgh and you're more likely to find his name on a list of the biggest first round WR busts of all time than you are in an article that remembers him in an even luke-warm fashion. He was traded away to St. Louis before the 2002 season after the organization had seen enough in years two and three. Edwards never really caught on elsewhere, and actually was playing in the Arena League as of last April before getting cut. I think Edwards serves as a good example of why selecting WRs so early is a dangerous proposition. For every Santonio Holmes, there's many more Troy Edwards's.  Grade: D

Shields had a very short career lasting just two seasons and he was cut in June of 2001. He fell out of favor with his coaches because of a perceived lack of hitting and tackling ability from his safety position. Shields got off to a decent start playing in all 16 games his rookie season, starting one, and finished with 18 tackles, one sack, and four interceptions. He started his second season as the starter but he suffered a minor injury and never returned to the starting lineup. He finished that season with 12 tackles in 10 games (one start). Just to sum up his odd career, somehow Shields resurfaced in 2004 on the Dolphins roster although he didn't play in a game. He also must have gone to camp with the Chiefs at some point because several pages list him as a Chief. Grade: D-

We may have not liked the way we parted ways with Joey Porter after our magical Super Bowl run in '05, but the reality is Porter was an outstanding member of the Steelers illustrious linebacking fraternity the past two decades. After not seeing much playing time in '99, here are Porter's sack totals for the next 7 seasons: 10.5, 9, 9, 7, 5, 7, 10.5, 7. Pretty impressive. And after '99, there were only two years where he didn't snag an INT. Porter's 65.5 sacks are good enough for 65th best in NFL history, and 18th best among active players. Any way you carve it up, he had a productive career. Porter was selected to 3 Pro Bowls, was a 3-time All-Pro performer, and was an integral part of our playoff push and Super Bowl run in '05. He also  only missed 6 games in his 8 year career with Pittsburgh. You can't really blame Porter for taking the money and running last offseason. There was no way the Steelers would have paid him the $20+ million in guaranteed money that the Dolphins were willing to do. While in Pittsburgh, he performed at a really high level, and after a somewhat sub-par year in Miamin in 2007, Porter exploded back onto the scene in 2008. His 17 sacks and high-octane leadership were more than enough to validate Miami spending the big bucks after the 2006 season.  Grade: A- 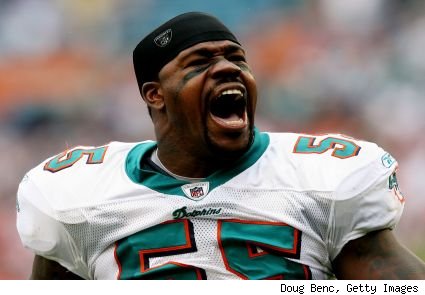 The 1998 Outland Trophy winner, Kris Farris never made it in the NFL. Farris broke his ankle a few weeks after the draft, and was forced to go through two years of difficult rehab before signing on with the Bills in 2001. Just a few weeks into the season though, Farris broke his leg, ironically against the Steelers, and basically called it a career. Farris' lone connection with the organization (and it's not really one at all) is that he is a Sales Manager for Crest Steel, a steel distributor serving the Western United States. Grade: D

The Steelers got fairly solid value out of this pick. Famous Amos played five seasons in Pittsburgh behind Jerome Bettis before being cut after the 2003 season. Zereoue's best year was in 2002, when he carried the ball 193 times for 762 yards and 4 TDs. He was also a decent pass-catching threat out of the backfield, averaging nearly 20 catches per year over five years, including a 42 catch season in 2002.

A Renaissance man off the field, Amos never
quite could package all his tools on the field
to become a long-term 3rd-down option in the NFL

Despite his decent statistical achievements, Zereoue never quite broke through and became a big-play threat for our offense. At least in my memory, I remember wanting to see more of him in the 2000-2002, but being a tad disappointed when he didn't really provide more burst or big-play-ability than did Bettis. Still, a solid Steelers player, and a fine selection for our third pick in the third round. Grade: B

Smith had to wait a while to hear his name called by the Steelers in the 1999 draft, but it sure didn't take him long to prove that he belonged in the starting lineup. Smith only played in 6 games his rookie season, but he cemented himself in the starting lineup during his second season, starting 15 games. Smith then embarked on a ridiculously impressive games-played streak that wouldn't end until injuries cut his 2007 season short in Week 12. During that streak Smith had three seasons of at least 5 sacks and 6 seasons of at least 40 tackles. In 2008, he did both yet again, finishing with 5.5 sacks and 44 tackles on the league's top rated overall defense. Smith's only been elected to one Pro Bowl (following the 2004 season) which is a total joke, but he's often recognized as one of the best 3-4 defensive ends in the league by just about everybody who follows the sport closely. Steelers fans far and wide were given a bitter-sweet reminder of just how valuable this guy is when our defense went into the tank following his injury in '07. When he was back at full strength in 2008 for the duration of the year, the Steelers defense once again was impregnable. Smith should go down as one of the most underappreciated Steelers players of all time, and one of the most durable and productive DEs the NFL has seen this past decade. Grade: A+

Another really solid pick-up in this draft by the Steelers. Tuman never established himself as a receiving threat that defensive coordinators would even think about, but that matters not. The TE wasn't quite used the way it is now in the late 90s and early 00s and we didn't throw the ball much during his hey-day anyway. What he did do though was help the Steelers run the ball as well as any team over the course of the past ten years. Tuman finished his career with a shockingly low 43 total receptions for an even 500 yards and 7 TDs. That doesn't matter though. He was a reliable and steady player for the buck that simply had to go now that 3rdd year backup Matt Spaeth is in the fold. Tuman has bounced on and off Ken Whisenhunt's Arizona Cardinals squad, but is currently jobless I believe. If this is the end of the road for Tuman ten years into his career, a hearty congratulations to him for a job well done wherever he's been. And don't feel too bad. It's about time he spent more time with that good looking wife of his anyway.  Grade: B+

When it became clear that the Steelers likely had a keeper in Hines Ward, there wasn't much hope for Johnson in Pittsburgh. He played for a year and a half in the Steel City, then bounced around for brief stints with the Jets, Bengals, and the Ottawa Renegades of the CFL before calling it a career. Johnson hauled in two passes his rookie year, the only two of his NFL career.

However, while doing this research just a short while ago, I stumbled across a Business Week article about Johnson that was written just last week. Very odd. Anyway, the article is essentially about Johnson's winding career path, one that he thought would lead to NFL stardom, but was forced to take a U-turn before it really picked up any steam. Johnson just received his MBA from Carnegie Mellon. Well done. And although the draft pick didn't work out, again the Steelers show that talent may be hit or miss in these drafts, but character is not. Grade: C-

Kelsay played in six games his rookie season and spent the following season with the Rams even though he didn't register any stats in either year. Kelsay wasn't able to make the switch from DE at Nebraska to OLB in the NFL and was cut in camp prior to his second season. Kelsay's real story came in 2003 when he was arrested and charged with trespassing and disturbing the peace. He walked into a Lincoln restaurant and sat down with a group of women and began to eat their food. Because of his size the women were unable to do anything about it and chose to just leave. After the women left, Kelsay pulled a chair up to the salsa bar, sat down, put his elbows on the counter and started to eat from the cheese and salsa containers. Grade: F

Our second straight Cornhusker selected in the 7th round of the 1999 draft. If we were evaluating Brown's career overall, it would have to be considered a solid success. But unfortunately for Steelers fans, Brown didn't really break through until being released by Pittsburgh and signed by the Houston Texans in 2002. has had a decent career to this point and is still going strong for the Houston Texans. Brown never could adjust to the wind and the surface at Heinz Field and his final season in Pittsburgh ended with him making just 68.2% of his field goals and missing three extra points. In 2001, Brown made just 58.3% of his field goals at home and the Steelers allowed him to walk in free agency. Brown still isn't a tremendously accurate kicker though and has just 4 seasons out of 9 in which he's made 80% or more kicks (Reed has 4 seasons out of 6). Grade: C+