Many thanks to tdp992 for the timely and solid pick and write-up. Matthew Stafford still finds himself on the board through pick #8. Next up? The Green Bay Packers, represented by HighSchoolSteeler. - Blitz-

************ Few teams last year can say they had a more disappointing season last year than the Jaguars, who finished the 2007 season 11-5 and made it to the second round of the playoffs, but then reversed that record in 2008 with a 5-11 mark. Coming into 2008, high expectations were set, even being ranked #5 overall in ESPN's power rankings. After that it went all downhill.

Jacksonville never seemed to recover from the 0-2 start they were suffered with, and ended up losing six out of the last to end up with the number eight overall draft spot.

The two elite receivers are off the board, the two elite tackles, and that 6'2" 340 pound nose tackle that would've been a nice fit in JAX is also off the board. In the real draft, if the Jags were in the position that I'm in now, then this would be the perfectly ideal situation to trade down in, and slide down to that mid-late spot to pick up Harvin or one of the other tackles. But... since this is a mock draft and there's no trading.. I have to go with Andre Smith from Bama. 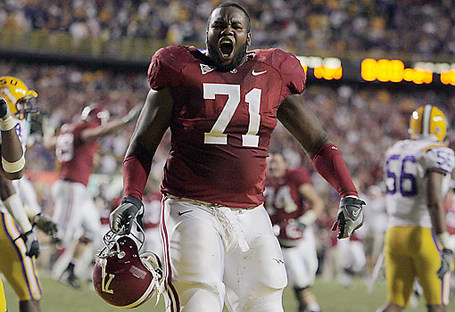 Yes, it is sort of a reach, but pretty much anything I would've picked here would have been. Really the only value picks here are DE/OLB pass rushers in Everette Brown and Aaron Maybin, but Jacksonville spent last year's two draft picks on DE's so it'd really just make that a waste.

Just a few months ago, many had Smith going number one overall to the Lions. But after the combine where Andre did not show up for workouts, many have began to question if this guy has the work ethic to become a quality tackle in the NFL, or if he's just a lazy slob who thinks that he won't need to work for his job since he was praised so much at Bama.

hings did not get better after the combine though. He was a huge disappointment at his pro day, his fastest 40 time being 5.28, and only recording 19 reps on the bench. And to top it all off, he ran his 40 without his shirt on (A painful image for many) and exposing that he's obviously not in good shape, being very overweight.

Not to say there's no upside though. Very few lineman posess the quickness and footwork for someone of his size, being 6'4" 340lbs. He definitely has the potential to be a premeir pass blocking LT in the NFL. Also a great run blocker too, where scouts say he has a terrific first punch while being very aggressive and physical. And most importantly, has great durability and almost no signs of being injury prone.

While most people think of tackles generally as safe draft picks, Smith certainly is not. Honestly if he keeps his current mindset I do not believe the guy will last two seasons in the NFL. Although... If this guy straitens his attitude out I really think he has the potential to be a top 5 LT for years to come, due to his uncanny footwork for such a huge lineman. After losing four year starter Khalif Barnes to free agency, a long term solution at tackle seems like a great pick for JAX.