IX- Yesterday I linked an article where Bruce Arians said either a draft pick, Limas Sweed, or Martin Nance will be our number three receiver next year.  So who in the world is Martin Nance? The Pittsburgh Sports Examiner gives a nice overview of his short career so far.  Also below is some video footage of some college highlights.  (The Quarterback in the video wearing number 7 looks pretty good, maybe we should try to draft him.)

X- Heinz ketchup has decided to steal the idea of a Steelers six-pack from BTSC.  They are offering six commemorative ketchup bottles celebrating the Steelers six Super Bowl victories.

XIII- Mewelde Moore had never won a championship at any level before February 1st, 2009.  The Steelers official website has a nice piece on what emotions and feelings our top free agent signing from last year had after winning Super Bowl XLIII. As was noted on BTSC just about one year ago today after he was signed, the Steelers brought in not only a good player in M&M, but a really good guy as well.

XIV- Tragically, the search has been called off by the Coast Guard for the missing men in Florida Gulf Coast.  Tank Johnson of the Dallas Cowboys is organizing an independent search and is asking for help from trained pilots to volunteer their time and aircrafts to help find the players.  Three out of the four men are still missing including former Steelers' linebacker Marquis Cooper.

XL- Pat White says he would love to play for the Steelers but also wants to play quarterback in the NFL.  Ed Bouchette reports that the Steelers feel Pat White is a first round talent that will probably go in the 2nd round.  I just don't see the Steelers drafting White during the first day (or at all) mainly because we drafted Dennis Dixon last year.  Having said that I think White is a winner and will improve whatever team he plays for.

XLIII- Troy Polamalu is out surfing the waves in Hawaii.  The information surprisingly comes from TMZ.com.  I guess Troy Polamalu is being hunted by the paparazzi like he is Brittany Spears or Brad Pitt.  Don't be surprised when we hear that Troy tackled a photographer, he's a bad man. 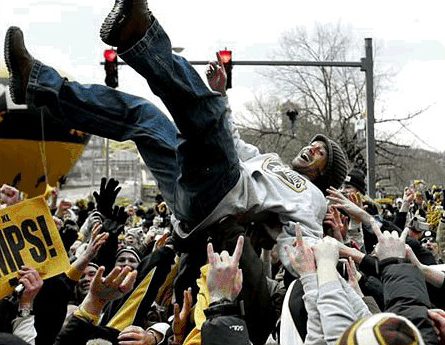