IX- The media loves to characterize the Steelers as the team who builds from the draft and doesn't sign free agents, but in reality Pittsburgh does participate frequently in free agency but prefer to make smart and thrifty moves.  James Walker of the ESPN North Blog ranks the Steelers as having two of the top five free agent signings in the history of the AFC North, and also having one of the five worst signings in the history of the division. 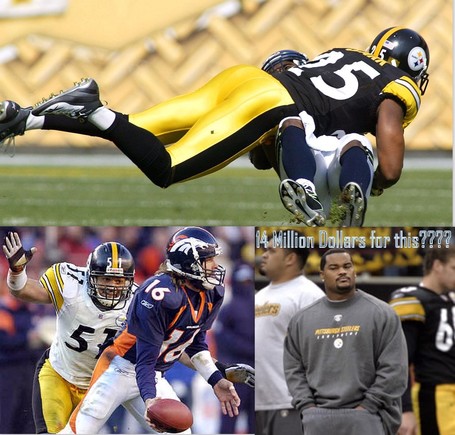 X- A letter was emailed to Matt Pawlikowski of the Pittsburgh Sports Examiner that is thought to be from Mayor Luke Steelerstahl Ravenstahl to his three month old son.  Whether or not the letter is actually from the Mayor it is still a touching tribute to the city of Pittsburgh and all that are a part of Steeler Nation.

XIII- The best news I have heard from the Steelers so far this offseason is that Keyaron Fox was in for a visit yesterday and should be close to re-signing, according to the Post Gazette.  Keyaron was a big part of our stabilizing our special team's unit's especially in punt and kick coverage.  He is another prime example of a free agent pick up that is contributing without breaking the bank.  Acrollet also published a fanshot on the topic, so feel free to weigh in at his fanshot..

XIV- A warning to those who may be at work; some of the content in this link about Jeff Reed's escapades earlier in the night of the infamous "Sheetz paper towel incident" is probably not safe for work.  The reason I am posting this is I am wondering how much longer the Steelers will put up with this behavior?  Reed might have been one of the best kickers in the league the past few years, but if the story is accurate it won't be long before Reed finds himself charged with something more serious.

XL- The Florida Times Union proves that a whole bunch of Jacksonville based Steelers' fans don't know how to read very well even if they are mostly correct.  I originally saw this link over at Mondesi's house, so go check out their site today as they have some info about Big Ben at movie premiers and Mike Tomlin watching the Pittsburgh vs. Marquette game last night.  The Finals of the Best Pittsburgh Sports Blog are going on now and it looks like Pen's Blog is running away with the crown against Mondesi's House.

XLIII- After Six Super Bowl championships and being crowned the undisputed champion of the Super Bowl area you would think the Steelers wouldn't have anything left to accomplish.  Not so says the Beaver County Times, a few Steelers players have their sights set on Basketball. 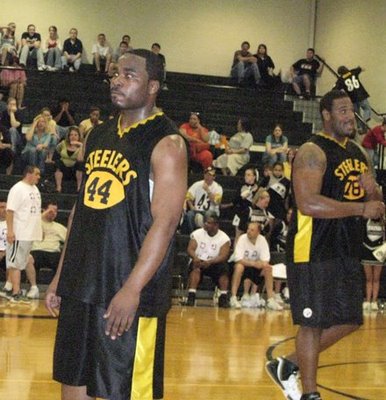