Share All sharing options for: The Waiting and Guessing Game Is Over - Bryant McFadden Signs With Arizona

Ken Whisenhunt & Co. are up to their usual tricks, poaching former Pittsburgh Steelers players to come help turn the Arizona Cardinals into the same type of consistently successful football organization that Pittsburgh is. Their latest maneuver is the signing of free agent CB Bryant McFadden.

The reported terms of the deal are very reasonable in my opinion. McFadden got a 2-year deal worth $10 million dollars. He is scheduled to earn $5 million of it in 2009 and the other $5 million in 2010. Every red cent of the 2009 figure is guaranteed, but still, that ain't much money in the grand scheme of things. I'm pretty mystified quite frankly. A 2 year deal would have been ideal for Pittsburgh. It would have allowed them to maintain a deep secondary while there guys up front finish their contracts and/or most productive parts of their career. And it would have not tied up much money in any any year past 2010. A dream come true, no? As for B-Mac, he still would have gotten to hit the open market once more at 29 years of age, still plenty young to get one more big, fat payday before hitting the unwelcome age of 30.

What it means for McFadden:

This is just about an ideal deal for McFadden if you ask me. Unless he gets injured or for whatever reason has a miserable year in 2009, McFadden will get paid handsomely in both '09 and '10, then will again hit the open market in 2011 when he's still not yet 30 years of age.

He will also get to play opposite another fantastic cornerback, 2008 rookie Dominque Rogers-Cromartie, who came on late in the year to pick off 4 passes while stabilizing Arizona's defense with his unique ball hawking and play making skills. 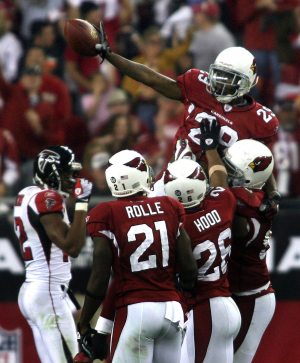 What it means for Arizona:

Well, it means they have three quality cover corners in Bryant McFadden (27 years old), Roderick Hood (27 years), and the previously mentioned DRC. Throw in Antrel Rolle (26 years) and Adrian Wilson (29 years) at the S position and the Cards suddenly have one of the more capable and deep secondarys in the NFC, and perhaps even the entire NFL. We'll see if they're able to shore up their run defense enough to allow their secondary to make a significant impact on that side of the football for Arizona, but if they can in fact improve, even just slightly, stopping the run (they were 16th last year), the Cardinals' defense should be plenty solid to compliment the explosive offense engineered by Whisenhunt, Kurt Warner and Larry Fitzgerald.

What it means for Pittsburgh:

We'll get into this more this week and as the 2009 NFL Draft approaches, but my initial reaction is that Pittsburgh is now fairly likely to draft a CB on Day 1 this coming April. Let's assume though that we don't take a CB in Round 1 and don't have a starting caliber rookie CB to step in on opening week of the 2009 season. That leaves us with Ike Taylor, William Gay, Deshea Townsend and Anthony Madison. The potential problem may be that Gay and Townsend may both be better suited to excel as nickel CBs than man-to-man guys capable of being left all by their lonesome on the perimeter.

I have faith that Deshea can drink from the fountain of youth one more year and that Gay can continue his impressive early career trajectory. Of course, when you have a pass rushing duo like James Harrison and LaMarr Woodley causing opposing QBs to throw the ball much earlier than they'd like, and beasts like Aaron Smith and Casey Hampton making it next to impossible to lean on the running game, the Steelers could be just fine at the CB position. But getting lucky in the injury department becomes more important than ever for Pittsburgh, and not just at the CB position either. An injury to one of our starting Safeties, or to Wood or Deebo and things could get wooly for the Steelers defense more quickly than we might initially realize, even if the unit is just one year removed from one of the more impressive

Are the Steelers now ready to make a strong push at signing former Tennessee Titans CB Chris Carr. If they are, they better act quickly. Carr may now be the best free agent defensive player out there. The Detroit Lions, Cleveland Browns and New England Patriots have all hosted Carr last week, with the 25 year old CB not receiving an offer from any of them as of Sunday. Carr probably can be had for a 2-year type deal for less than $5 million dollars total, and it's worth noting that adding him would plug another area of need - kick returns.

Any other CBs out there that the Steelers might have their eye on? Or is Pittsburgh more likely to just head into the draft with the four guys currently on the depth chart (Taylor, Townsend, Gay, and Madison) and look to add a 5th option