My father's favorite Steeler in the early 1960s was defensive tackle Gene Big Daddy Lipscomb. That was good enough for me.  Big Daddy was my hero on defense, while John Henry Johnson was my hero on offense.  Big Daddy could handle offensive blockers like they were chess pieces.  He would move them in any direction he wanted to; sometimes out of the way and sometimes into the running back, causing a self-inflicted tackle.  It was an amazing sight to see and a sight that today can only be imagined. 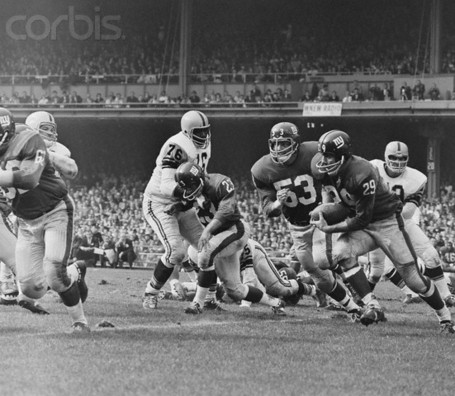 Big Daddy was born in Alabama in 1931.  He never knew his father, who died when Lipscomb was three.  His mother moved with her only child to Detroit.  When Daddy was 11, his mother was stabbed 47 times in broad daylight by her boyfriend at a bus stop.  Lipscomb moved in with reluctant grandparents who often mistreated him.  Sometimes he asked for trouble by stealing his grandfather's whiskey.  His punishment was getting whipped while tied to a bedpost.

Big Daddy never went to college.  He enlisted in the Marines in 1949 when he was 18.  He was stationed at Camp Pendleton, located in between San Diego and Los Angeles.  The public relations director for the Los Angeles Rams scouted him and signed him in 1953.  That PR director was Pete Rozelle, who later became commissioner of the NFL.  After three seasons with the Rams, Big Daddy enjoyed five great seasons with the Baltimore Colts, including the back-to-back championship seasons of 1958 and 1959.    His 6-6 frame added 50 pounds of muscle and he grew to 306 pounds, very little of which was fat.  He played defensive tackle for the Colts in the Greatest Game Ever Played in 1958 against the Giants.  Bid Daddy got his nickname when he was playing for the Colts.  He called everyone else "Little Daddy," so many rightfully called him "Big Daddy." 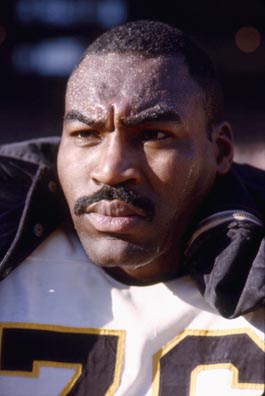 After the 1960 season, Big Daddy was traded to the Steelers for Jimmy Orr.  There were many who claimed that Lipscomb revolutionized the defensive tackle position in the NFL.  By comparison, Ernie Stautner also played tackle for the Steelers, good enough for the Hall of Fame, and he was 6-1, 230 pounds.  What made Big Daddy so special was that for a man his size, he could really run.

"Big Daddy was the first really big guy, at least that I ever saw, who was really fast and quick," claimed teammate Dick Hoak.  "Big Daddy and I came on the team together so we had a common friendship.  He was the first to go sideline to sideline.  Other big guys couldn't do that."

Knowing that he was a monster of a man back in the day when there were few if any like him, Lipscomb was committed to an offseason conditioning program that included being a professional wrestler.  He insisted on being a "good guy" in the ring, since he was never considered such on the football field.  Big Daddy wrestled for several years to stay as lean as possible. 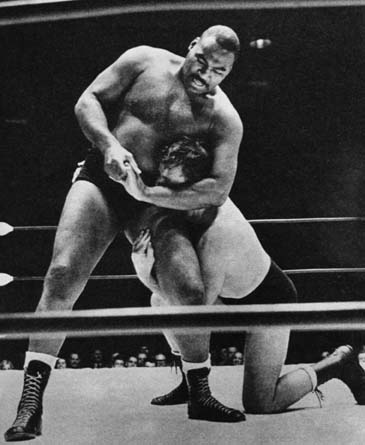 Big Daddy was coming off one of his finest seasons ever in 1962.  This was not only a Pro Bowl season for Lipscomb, his third, but he was also named MVP Lineman of the Pro Bowl as well, an award he garnered for the second time.  We can only anguish the unknown in wondering what might have been had Big Daddy Lipscomb lived to play the 1963 season.  In the case of Lipscomb, the woes of the Pittsburgh Steelers paled in comparison to the tragedy of a lost human life.

He had a voracious appetite for breakfast, women and whiskey.  Often he combined any two or three of the items at one time.  His love of women and booze caused him to enter and exit three marriages.  On the night of May 10, 1963, Big Daddy played some softball before hitting the nightspots of Baltimore.  Daddy and a companion named Tim Black partied with a couple of women until the wee hours.  Afterwards they looked for some heroin, which Tim Black scored on a street corner.

Back at Black's apartment, according to Black,  they each took a needle full of heroin.  Black survived and Lipscomb did not.  He died before an ambulance could get him to a hospital.  One explanation for his demise was that his liver was already badly damaged by years of heavy drinking.  Thus, his liver was not able to expel the heroin quickly enough.

It should be noted that while the autopsy corroborated with Tim Black's story, numerous people close to Big Daddy refused to believe it.  His friends and even ex-wives insisted that Lipscomb was deathly afraid of needles and simply did not participate in drugs, let alone shoot heroin.  It was curious that so many people thought Black's story just wasn't the whole story.

Lipscomb was a troubled man from obvious childhood trauma.  He carried around photos of his mother - not while she was alive, but police photos after her gruesome death.  He kept a gun under his pillow every night when he went to sleep.  He also slid his bed against the door.  Still, he had a heart of gold that left many teammates shaking their heads.  After practices he would walk the poorer streets of the city looking for kids needing shoes and clothing.  He would take those kids into stores and buy them what they needed.

Sadly, Big Daddy was no longer with us in 1963, and we sure could have used him.  The Steelers other defensive tackle was Ernie Stautner, who played his final season in 1963.  The Steelers went into their final game that year needing a win to get into the NFL championship game against the Bears.  They played the Giants, a team they destroyed, 31-0, earlier in the season.  Without Big Daddy, and without Bobby Layne, who also played his final season in 1962, the Steelers did not know how to play in a big game.  The Giants won, 33-17.

Big Daddy played only two seasons with the Steelers, 1961 and 1962.  Still, he and Stautner produced as fine a defensive tackle tandem as the Steelers have ever had, and I say that with great respect to Joe Greene and Ernie Holmes.