After a brief hiatus we return to our series of Draft Classes Revisited. You can find write-ups about our draft selections in 1998, 1999, 2000, and 2001 in case you missed them. This draft may not of had a break-out star but it did add several quality players, some of which had major impacts on both of our most recent Super Bowl victories. -DYM-

His last few seasons have soured our opinion of Simmons but the fact remains he's started 80 games in his 7 year career. That's not a bad number considering he missed all of 2004 with a torn ACL, and missed all but 4 games in 2008. Simmons doesn't have one area of his game that he excels in particularly, but he's been more than serviceable in all areas, at least until the 2007 season when he took a noticeable step backwards. Perhaps not coincidentally, Simmons signed a four year extension during the 2007 offseason but after only seeing action in 4 games in 2008, and being placed on IR during week 5 the Steelers released Simmons less than a month after their victory in Super Bowl XLIII. Overall, Simmons had four solid years as an above average offensive lineman and had three seasons mared by injury and non-performance. Grade: B-

Say what you will about him not being a prototypical #2 receiving threat, but don't forget he was arguably the most versatile offensive player in Steelers history. During his four seasons with the Steelers he combined to catch 162 passes, have 54 rushing attempts, return 168 punts, return 78 kickoffs, and complete 14 passes. Not to mention he scored a total of 14 touchdowns touchdowns in every way except rushing. After the Super Bowl season though Antwaan was a free agent and couldn't help but accept being overpaid by the Redskins to the tune of 6 years for $31 million. (He recently re-negotaiated and extended his contract for an additional three years to help the Redskins with Salary Cap Demands, taking his base salary from 4 million per year to 1.5 million per year.) Randle El didn't show the long-term commitment to the organization that we may have liked to see, but he still helped us win some jewelry for the thumb. For that, he should have a special place in our memories for years to come. Grade: B+

How Randle El will always be remembered.

Hope had two seasons at the front-end of his career in which he played mostly special teams before stepping into a starting role in 2004. Hope would go on to record at least 90 tackles in each the next two seasons while also snagging four interceptions and forcing two fumbles. After the Super Bowl season though, the Steelers were unable to resign Hope. Hope departed for the Music City with a SB ring in hand, as well as a 6-year contract in the neighborhood of $4 million a year. Hope might have been one of the more underrated and unappreciated Steelers in the salary cap era. He was no Carnell Lake, Rod Woodson or Troy Polamalu, but he was a savvy player who could make the big hit while still being relied upon to not recklessly expose the defensive collectively in either the passing or the running game. He has had three productive season with Tennessee reenforcing his second round value. Grade: B+

The Michigan product has been a Steeler his entire career, playing in 110 games over the past 7 seasons. In fact, Foote hasn't missed a game since his rookie season. The final game of the regular season this year was Foote's 80th consecutive start at RILB and the Super Bowl was his 12th consecutive playoff start. In his seven seasons he's totaled 432 tackles, 14.5 sacks, 3 interceptions, and 7 forced fumbles. Foote has never been the most physically gifted athlete but he gets the most out of his talent. Foote may not be the player he was a few years ago, but he still has some gas left in the tank, as evidenced by keeping 2007 first round draft pick, Lawrence Timmons, from cracking the starting lineup. The 2009 season could be the last for Foote in a Steeler uniform since this is the last year of his contract, and with many other big names to sign Foote will more than likely be testing free agency for the first time in his career. Grade: A 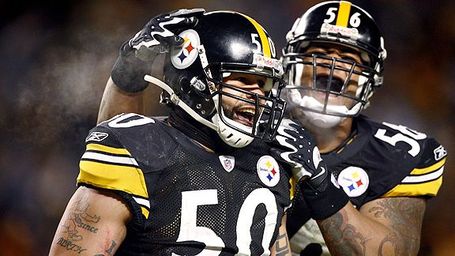 The Georgia Bulldog fullback played in 53 games in his first four seasons before tearing his ACL halfway through the 2006 season. His best seasons were in 2004 and 2005 when he combined for 414 and 387 yards from scrimmage respectively, with five touchdowns to boot. Haynes came back for one last hurrah after Willie Parker broke his leg in the 2007 season; he caught one pass in the regular season finale that year for 12 yards. Haynes has been kind of an enigma for this franchise. On the one hand, he was a big part of the first SB run, helping protect Big Ben in blocking assignments and serving as an acceptable outlet in the passing game. On the other hand, he never truly had the breakthrough season we all thought he might. Haynes' career can't really be viewed as a bust, but it also can't be seen as anything note-worthy or impressive. Grade: C

Round 5 - No Draft Selection

Mays was the first draft pick of this class that failed to have any significant impact at any point for the Steelers. He played just 3 seasons for the Steelers (even though he was on the roster with no stats for the next two) and during that time he caught just 11 passes for 154 yards. His biggest contribution was returning 32 kickoffs his rookie year for an average of 21 yards per return. Luckily for him though he was on the roster in 2005, so the UTEP product dons a Super Bowl ring somewhere. After Hopefully Limas Sweed or Dallas Baker can become productive players and help break the string of non performing wideouts that have been drafted outside of the first round since Mays was drafted. Grade: C-

Glover never broke camp with the Steelers, although he did play two games during the 2002 season for the hated Bengals. Glover is still a football player and champion however, as he won the Grey Cup with the BC Lions (CFL) in 2006. Congratulations to Glover for his stick-to-it-tive-ness, and a microscopic kudos to the Steelers for at least seeing the qualities in Glover that helped make him a champion, even if it was not in the world's premiere league. Grade: D

The 242nd overall pick of the 2002 draft has had a great career to this point for a 7th round selection. He has totaled 181 tackles and 11.5 sacks in his long, productive career. Keisel first made a name for himself as a special teams terror before taking over as a starter in 2006 for the first time. Keisel's true role may be as a special teams ace and as a back-up pass rusher who's athletic enough to make important plays in 3rd down situations. For now though, he remains a starter in our 3-4 defense. After two straight seasons of starting every game he missed six games this season due to a calf injury. The Steelers will be looking to upgrade the defensive line in the near future, but that should not taint what has already been a far better career than what your average late seventh round pick can boast. Grade: A+

Overall: To set the table a bit, the Steelers had the 30th overall pick in the 2002 draft and were coming off of a 13-3 season that ended at home in the AFC Championship game. The 2002 draft consisted of four offensive players and five defensive players. Overall that draft has produced five starters and one productive backup. Four of those six were starters on the Super Bowl team of 2005, and two of the six were still starters on the most recent Super Bowl team of 2008. Any draft that produces that many starters has to be considered an overwhelming success. The only knock we could conceivably make on this draft class is that it didn't produce a 'star' player, though some might consider Antwaan Randle-El a star of sorts, at least during his time in Pittsburgh. It is also ironic then that the 2008 defensive player of the year, James Harrison, was signed by the Steelers as an undrafted free agent from this class. Overall Grade: A-