IX Monday November 5th, 2007 was the night that James Harrison officially showed the world the kind of dominant force that he would become.  10 tackles, 3 ½ sacks, 1 interception, 3 forced fumbles, and a fumble recovery helped foreshadow the dominance that Harrison would exhibit in the 2009 season when he was named Defensive Player of the Year.

X- If you don't think Ben Roethslisberger was lobbying to keep James Harrison a Steeler you need to look at the last time Big Ben went up against Harrison in another uniform.  In Harrisons' final game at Kent State he sacked Ben 5 times, had twelve tackles and forced a fumble on route to willing his team to a 24-20 victory versus Miami of Ohio.  It's hard to imagine with his size, strength and huge performances that he was undrafted coming out of college.

XIII- If you don't remember the game where James Harrison body slammed an unruly Cleveland fan get ready for a laugh.  The YouTube video is necessary viewing for any Steelers fan and according to this article Harrison might not need the 51 million anyways since he started "The Silverback Security Agency."

XIV- The perception that some fans and media hold is that James Harrison is a freak athletically but that he is a punk, and somewhat dimwitted.  This article from ESPN shows that Harrison is able to accomplish anything when he puts his mind to it, including making the Dean's list in college and becoming the most dominant player at his position. 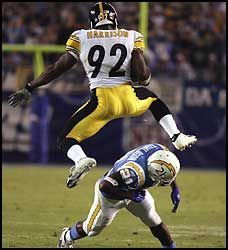 XL- Some of you on BTSC have been very critical of the amount of years linked to Harrisons' newly signed contract.  Jim Wexell points out why it might not be unreasonable to have Harrison playing at a high level for six more seasons.  Harrison was in the weight room days after the Super Bowl win and because he has only been a starter for two seasons the wear and tear on his body is significantly lower than the average NFL linebacker at 30 years old.

XLIII- I've heard the argument plenty of times that James Harrison is a product of the Steelers' system and that they shouldn't overpay him. The Steelers should just plug in another one of the million amazing undrafted linebackers they seem to find and move on.  But not everyone agrees, including Dick Lebeau who doesn't believe that Harrison is a product of the system, but rather a guy who never gives up and always gives 100%.  He thinks he would be amazing in any system.

"James Harrison would be a tremendous player in anybody’s scheme," LeBeau said. "He’s just a great competitor. He’s a young man who has been told ‘no’ a couple of times and I think that fueled him to be successful. There’s no question in my mind that he would be good in anybody’s system. He never stops on any play, never gives up in any game."