The 20th pick of the BTSC Mock Draft comes compliments of one of the many fine and truly interesting folks on the site, Steeler Buddha. For those of you who've read the site for a long time and participated in the gameday open threads during the season(s), you may remember Buddha is from Philadelphia, which he mentioned on occasion, most notoriously perhaps during last year's Week 3 debacle against the Eagles. When he stepped up to pick for the Eagles, I was pleased, knowing he'd have some solid perspective on this particular team and the vibe around the City of Brotherly Love about what the team should and might do with this year's embarrassment of riches in the draft. Many thanks for the pick!

Oh, and by the way, it's about time Oher went in our draft. I hate to sound like a broken record but you really need to read Michael Lewis' story about Oher if you haven't already done so. It's fascinating and brilliant for many reasons. It's football savvy, which is important. But it's an amazing and thought provoking story for countless other reasons as well. Next up?The Minnesota Vikings, who are represented by none other than the (most likely I'd imagine) newest parent in the BTSC community, TShaff. If you feel so inclined, join me in extending a Steeler Nation sized congratulations to the newest member of their family to the 'family' that is Steelers Nation! We'll see if there's even time for 'net browsing on shaff's part these days. We'll see as we try to keep things going with 9 days to go until the actual 2009 NFL Draft. - Blitz-

The Philadelphia Eagles are up with the 21st pick in the draft. They will also be back soon enough for 28th pick.

Considering that this is a team that came inches away from playing in the Super Bowl, it should be cause for optimism for Eagles fans. Sadly Eagles fans lost the capacity for optimism after the whole Terrel Owens debacle.

Some people claim that this is actually just a manifestation of the infamous curse of Billy Penn (one of the stranger sports curses on the books). Others claim that Donavan McNabb is to blame.

Either way the Eagles have a pretty good team and a pretty big chance to improve it. They have two 1st round draft picks and a stunning six picks in in the 5th and 6th rounds combined (four picks in 5th round; two in 6th). Last I checked any of these traded in for a pint of Ben Jerry's ice-cream or any player on the Cincinnati Bengals. Seriously though, it will be interesting to see what the Eagles manage to do with this embarrassment of draft picks. 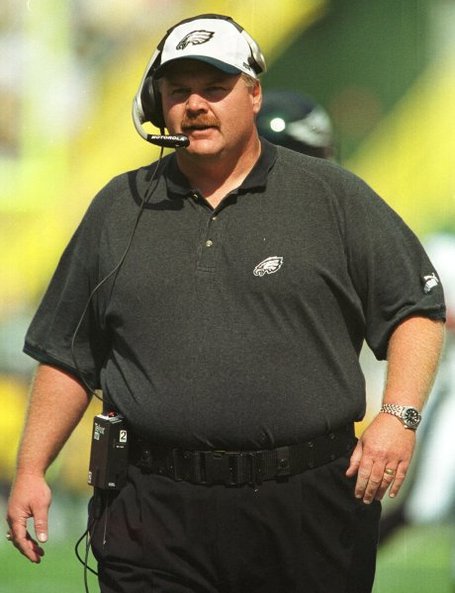 According to my friends and family in Philly, the Eagles take a Steelers like approach to drafting. They go for the best player available on the board. I think they will be quite happy to see what falls to their two slots. Having said that hey do have some needs:

Offensive Tackle: After losing both of their starting tackles from last season the Eagles sure could use a franchise left tackle.

Call me crazy, but I simply don't believe Andy Reid when he claims that he is not worried about replacing longtime left tackle Tra Thomas. He said either of his two starting guards, Shawn Andrews or Todd Herremans, are capable of sliding outside and protecting quarterback Donovan McNabb's blindside.

I think tackle is a top need and I think they will use one of the two picks to take one. Many drafts have the Eagles taking Oher, Beatty, or Britton in one of these slots. Perhaps Reid is counting on his ability to slide in and play guard:

Running Back: With Correll Buckhalter heading to Denver and Brian Westbrook beginning to slow down a tiny bit, many have the Eagles taking a running back at this spot. Most drafts have either Chris "Beanie" Wells or Knowshon Moreno.

Tight End: With L.J. Smith heading to the Ravens the Eagles could use their own version of Heath Miller in young Brandon Pettigrew. Many other drafts have him going here. It's a moot point for this draft since he was already taken by the Jets, but even if he was not, I've heard from many Eagles fans that they don't feel that he would be the right pick for their system. To be honest this is completely beyond my level of knowledge, but I figured I might as well repeat it.

Again Andy Reid has claimed he is happy with the position.

"I'll always look at something if there is a great player out there, and it doesn't matter what position," Eagles coach Andy Reid said. "I'm always looking to better our football team. But do I think we have good enough (wide receivers) here? Yeah, I do." 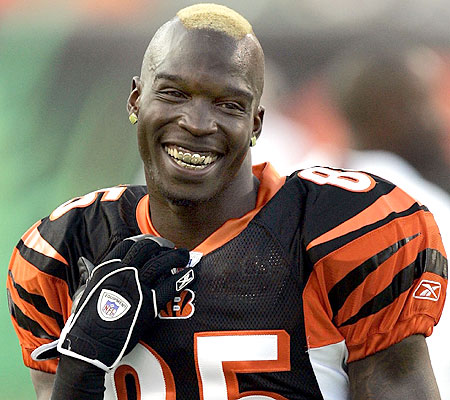 Eagles fans on the other hand have been excitedly talking about the possibility of getting Chad Johnson . This raises the question "is the drinking water in Philadelphia laced with potent high grade LSD?" I mean haven't they been in this movie before?

How could this guy not help your locker room?

In any case with DeSean Jackson and Kevin Curtis playing very well, I don't think the Eagles take anyone who is not amazing at this spot.

With the 21st pick of the draft the Eagles take....

First let me explain: a running back would be a good pick here. But I also think that the top two backs don't quite fit what the Eagles. Beanie Wells is a great player, but the Eagles will want a back who can catch. I am just not sure will love Knowshon Moreno's value here.

Michael Oher on the other hand has seen his draft stock fall over the past couple months. Once mentioned among the top 10 picks he is now seen as going in the middle of the first round. If he does slide to this stage of the draft though, I think the Eagles would jump on the opportunity. Most boards have him going somewhere between 11 and 21.

Apart from his well documented story Oher (pronounce Oar) seems like a legit Left Tackle. He's got all the physical tools one could want, but there have been too many questions about his desire and his motor. Much has also been written about his poor bench press numbers at the combine and pro-day. None-the-less I think the Eagles take the risk and try to work with a guy whose got something nobody can coach or teach. The perfect body for a left tackle . 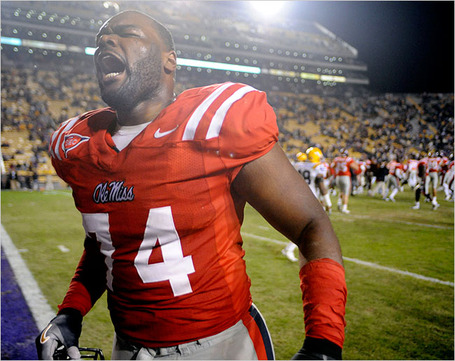