First, I would like to reference my selection from the 2008 BTSC Mock Draft.  I had the Denver Broncos picking Ryan Clady with the 12th pick in the draft.  I was correct (not surprising), but what I wrote in the opening paragraph really surprised me considering all the recent events surrounding the Broncos in the last month...

With the 12th pick my job here has been made easy and at this point in the draft I think this will be one of the most agreed upon picks. And if I'm Mike Shanahan I'm thrilled because this pick will not be up for debate by the fans, which could have caused even more turmoil for a franchise on the verge of self destruction.

As it turns out Clady was not enough to keep the Broncos from self destruction, however necessary it may have been.

Now onto the Vikings...

Coming off a season where the Vikings won the NFC North and made it into the playoffs, they will rightfully head into this year with their heads held high and hopes of reaching the Super Bowl.  I believe they have a shot because of the division they are playing in and the stout defense they bring every single week (Allen, Williams Bros, Winfield, Greenway).  They have very good players at every level and this is a team that is built to win now.  As with the Vikings in the Brad Childress era, their fate in the season and a potential playoff run will ultimately be decided by QB play.

Brad Childress has built the Vikings HIS WAY.  I give lot of credit to Ziggy Wilf, the team owner, because he trusted his hiring decision and has given Childress full control to make all coaching and personnel decisions.  One of his first hiring decisions was to bring on a defensive coach from Tampa to lead his defense, Mike Tomlin.... need I say more.  You'll see that the Vikes have made a significant effort to keep their young players.  None of these guys are big names, but they are key pieces for the Vikings to remain cohesive in the locker room and competitive on the field.  Guys released or not resigned are aging and/or overpaid.

It's been noted that the two biggest needs for the Vikings are OL and WR.  There are three significant reasons why the Vikings will go with OT and not WR.

With our focus turned to the OL there is one guy who is quickly rising up the draft boards, has experience playing RT and LT, and will come in and provide an immediate upgrade over Ryan Cook.

Vikings Pick at #22 is OT Eben Britton from Arizona 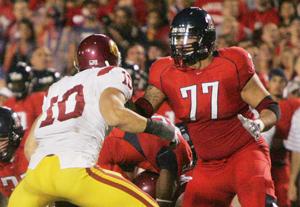 "Although he was able to use sheer size, strength and athleticism to be a force, Britton could have used another college season to hone his game. He started all 37 games he appeared in at Arizona, lining up at right tackle for the first 24 before shifting to left tackle in 2008. Britton is a very bright, high character type who was a team captain and is expected to work hard to get ever closer to his significant potential. His work ethic is reflected in his getting only four penalties in 2,461 snaps, according to coaches stats. His made 17 blocks that led directly to touchdowns in 2008." - Frank Cooney, The Sports Xchange, NFLDraftScout.com