IX- Paul Zimmerman of Sports Illustrated writes about the toughness and physicality that the Steel Curtain defense brought to the rivalry of the Steelers and the Cowboys in the 70's.  This quote sums up the article much better than I could dream to do.

"Look at what the Cowboys were up against. The Steelers' defensive line has a tackle called Mean Joe and an end called Mad Dog. Their middle linebacker has almost no teeth. Their right linebacker is named Dirt. And their quarterback...man, if Terry Bradshaw ain't limping and bleeding, the argument hasn't even started"

X- Some of legendary broadcaster Myron Cope's writing has been linked or republished here at BTSC before, but for those of you have never read his work be prepared to be blow away, his writing has all the heart and emotion of his broadcast work.

"As the Italian Army general staff danced on the dugout roof, Franco Harris was running over cornerbacks, laying them as flat as so many slices of capocollo. Count Frenchy Fuqua, his natty running mate, was now wearing two watches (one on a gold fob across his vest), and Defensive End L. C. Greenwood was hanging in there week after week on one healthy leg. One Sunday the congregation of St. Bernard's Roman Catholic Church arose in the middle of mass to give a lusty cheer for Linebacker Jack Ham. But it was in the Astrodome at Houston the next to last week of the regular season that our troops, striving to protect a one-game lead over surprising Cleveland, proved what they were made of."

XIII- An article from the days when we shuffled through numerous QB's in an attempt to find a savior that could get us to the promised land.  Kordell Stewart was given a shot in Pittsburgh but he struggled in big games and was never able to withstand the pressure of being the starting quarterback for an NFL team.

XIV- A brief article from October 28th, 1957 regarding a Pittsburgh Kid who was shunned by the Steelers and who was starting to become a big time player with the Colts.  That week the Steelers offense scored zero points, gained only 54 yards rushing and  118 yards passing.  It looks like we needed a lot of help.

XL- The memory of the average football fan is very short, and not that long ago Pittsburgh fans were frustrated of suffering through over 25 years without a Super Bowl victory and beginning to show angst.  This article from a few days before the 2005 AFC Championship game was written with a sense of frustration and urgency that is quite amusing to read just a few years later. 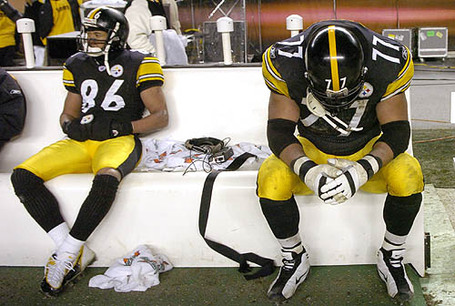 XLIII- In 1998 The Cleveland Plain Dealer honored Hall of Famer Chuck Noll with a wonderfully reminiscent article about the many accomplishments of their hometown legend.  Many younger Steelers fans may not be aware that Noll not only was born in Cleveland but also played six seasons as a guard for the Browns