Many, many thanks to Here We Go for his prompt selection on a weekend. It's a good pick and that makes plenty of sense. Will Bill Parcells, who is notorious for focusing most heavily on the interior positions in the draft, see things similarly? We'll see. It was great having HWG around for the playoffs and I look forward to seeing him and some other new faces even more regularly as things heat up again immediately following the draft and in particularly later this summer. Next up? The rival Baltimore Ravens, represented by Brett Jones. -Blitz-

I just got back from the Philly Pens game.  Let me just say that calling Philadelphia the City of Brotherly Love is like calling the Bungles positive role models.  The extent of their fans d-baggery was bad enough that my new dream scenario for the Steelers this season (and every season hereafter) is embarrassing the Eagles in the Superbowl.

Anyways, I predict that the defending AFC East Champs Miami Dolphins will select DB Darius Butler out of Connecticut 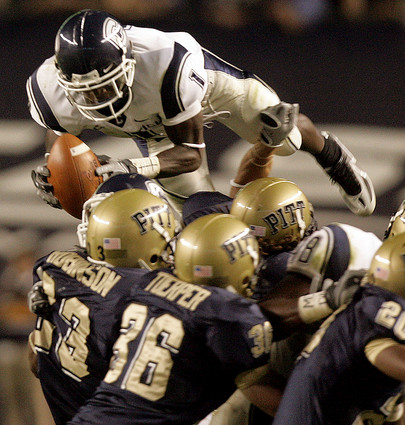 Aside from winning multiple games, the biggest change in Miami last season was bringing in Parcells, Sporano, and Pennington.  All three of them deserve tremendous amounts of credit for taking a team that was 1-15 the previous year to the playoffs.  That being said, the Dolphins were easily taken care of by the Rat Birds in the playoffs, and they will certainly have their hands full matching or exceeding their win total from 2008.  Unlike last year's Steelers, I can't foresee the Dolphins succeeding without immediate and significant contributions from their first round pick.

The departure of corner Andre Goodman and Safety Renaldo Hill opens up some space in the secondary.  Miami filled the safety void by signing Gibril Wilson. The Dolphins did add corner Eric Green from Steeler West, but I hesitate to consider him starter material.  The Dolphins passed on BMac and other CBs in free agency, so I feel they'll address this need early in the draft.  Looking at the pool of available CBs, I consider Butler to be the best. He's more than athletic enough to be a legitimate shutdown corner.  He has solid straight away speed and can throw down....hard.

He's the type of player that will do whatever it takes to win, including returning kicks, playing receiver and having monster film sessions. In case you're interested, here's a highlight reel of him playing the actual sport in question, football.  Connecticut is playing Virginia, and the commentators took him out on a date after the game.

A lot of what I've read on the Phinsider, amongst other sources,debates the merits of selecting a WR with the first pick.  Along with picking up some beef for the DL, I consider WR a likely draft possibility position-wise.  The wildcat offense was as resourceful of a scheme that the NFL has seen, but at some point you need firepower to hang with the big boys.  However, Parcells is on record saying that quality WRs are a dime a dozen, and historically several of his successful teams lacked a bonafide #1 stud receiver.  Although Sporano has more of an offensive background, Parcells clearly wears the pants in their relationship and will be able to convince the University of New Haven product Sporano to show some Connecticut love and draft Butler.