An awesome contribution here from Brett Jones selecting for the rival Baltimore Ravens. Love the other options at the end, though the prospect of the Ravens getting Anquan Boldin is a scary though. Next up? Paul Morel and the Indianapolis Colts. - Blitz-

As the saying goes, "keep your friends close, and your enemies closer." This is how I justify my proximity to the hated Baltimore Ravens, their new facility mere miles from my home and their old facility, which I pass daily, now owned by my alma mater. In many ways, it’s a sad state of affairs for a Steelers fan to be living in the suburbs of Baltimore. Still, it could be worse; I could be a Ravens fan.

Still, the proximity affords me the somewhat unique opportunity amongst fellow Steelers fans of having entirely too much knowledge of the organization that I love to hate. From the local sports talk radio to my friends and co-workers, it’s more difficult to ignore what’s going on with the team than to keep your finger on its pulse. Of course, it doesn’t take any inside information to determine that, given the remaining options, the Baltimore Ravens will select the local favorite, wide receiver Darius Heyward-Bey.

As everyone who watched the three contests between the Steelers and the Ravens in 2008, it is clear that the great failing of the Ravens is their lack of offensive explosiveness. While Derrick Mason was able to pick apart the Steelers secondary, particularly in the teams’ first meeting of 2008, never did the Ravens have an explosive deep threat that could have truly given t combine he Steelers a nightmare. Enter Heyward-Bey (6’1, 210lbs.) who entering the draft as a junior out of the University of Maryland posted the fastest time in the 40-yard dash at this year’s, 4.30. It was similar speed that led Baltimore to draft Yamon Figurs, the fastest player in his draft class, in the third round of the 2007 draft. However, while Figurs offered blazing speed, his skills as a pass catcher were questionable and his contribution to the Ravens has come primarily as a kick returner, although even Figurs special teams abilities haven’t made Figurs irreplaceable. A player like Heyward-Bey, with similar (albeit not quite as fast) speed may be able to at the very least push Figurs as a kick returner while giving the Ravens a young, talented receiver coming from a pro style offense 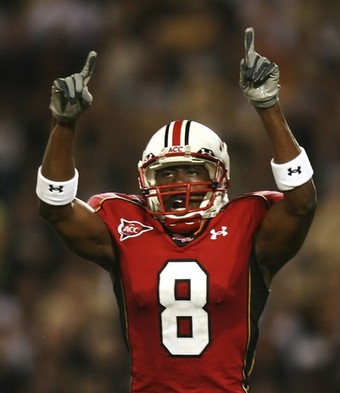 Heyward-Bey would ideally give the Ravens young quarterback, Joe Flacco, a deep threat for the foreseeable future. His good size combined with his speed will, at best, allow him to create the downfield separation that the Ravens offense has lacked for years, arguably since being stolen from Cleveland. Additionally, Heyward-Bey will be an asset when running the reverse, a play that Baltimore was already able to execute with success in 2008. His blocking, as you may imagine from a deep threat underclassman, is not as developed as it will need to be, but he has experience as a blocker in Maryland’s offense

All things considered, pairing a young, gifted receiver with a ton of upside with a young, potential franchise Quarterback is likely too tempting an option on which to pass. By all accounts, Heyward-Bey impressed the Ravens brass, as well as Joe Flacco, who threw to Heyward-Bey during Maryland’s pro day. If he remains on the board when the Ravens make their selection, you can count on the McDonogh product to come home to roost, so to speak, mere miles from his high school.

Robert Ayers, DE/OLB, Tennessee - could be an upgrade over incumbent Jarret Johnson or be the heir apparent for Terrell Suggs if he’s able to escape the franchise tag in 2010.

Percy Harvin, WR, Flordai - Character concerns and a positive test for Marijuana at the combine has soured some teams on Harvin, and while the Ravens have certainly employed their share of criminals over the years, Harvin’s upside isn’t such that he’s a justifiable pick with Heyward-Bey still on the board.

Alphonso Smith, CB, Wake Forest - he signing of another Maryland alum, Dominique Foxworth, and the decision to bring back former starter Samari Rolle in a nickelback roll diminishes the likelihood of an otherwise obvious pick, given the remaining corners. The Ravens would be wise to address the corner position in the draft, but they no longer need to do so in round one.

Trade for Anquan Boldin - The word is that the Cardinals will settle for no less than a first and a third round pick to acquire their disgruntled receiver. While it would be tempting for the Ravens to add a proven stud receiver to their offense, it may be difficult to justify giving up two higher round draft choices, considering the solid record that Ravens GM Ozzie Newsome and his staff have earned on draft day. Then again, the Ravens once executed a trade for Terrell Owens, who for all his faults was wise enough to spurn the team. Will the Ravens go back to that well, or have they learned their lesson?