We're humming along swimmingly now in the 2009 BTSC Mock Draft. I and others had a lot of fun with our selector for this pick, Paul Morel, during the game day open threads. I'm hoping even more will join the party/circus that is those live chats during game day this coming fall. A very comprehensive write-up here from him, so again, color me impressed and appreciative. Next up? The Philadelphia Eagles and Steeler Buddha for the second time in a week. -Blitz-

At pick 27, it would be easy for the Colts to make a "reach" pick. This is especially true considering how the BTSC mock draft has played out. The Colts really need a T or a DT, but all of the true first rounders have been taken. Another position which could be addressed in the draft is WR. The Colts lost Marvin Harrison this off-season, and with a hall of fame QB like Manning at the helm, it would be a shame not to surround him with the best available weapons. Still, two wideouts have already been taken, and this WR class is deep enough that good prospects will be available on the second day of the draft.

The other need for the Colts is DB. This is not an especially deep year for defensive backs, and the top prospect has been taken. Alphonso Smith is VERY tempting at this position in the draft, but there is a reason to hesitate. First, Smith is short. Second, the AFC South isn't stacked with WR talent. The Jags AND the Titans both had to go out an get wideouts in free agency. Neither team picked up anyone who is too intimidating. The Texans have great receivers, but last season they weren't a playoff contender. Finally, the Colts just resigned Matt Giordano, a good sign that they won't be picking DB in the first round.

Since the Colts would have to reach to address their need at T/DT, since there is plenty of time to pick up a WR, and since they probably won't be picking DB, in the BTSC Mock Draft, the Colts will take the best player available.

Lucky for the Colts, the best player available also fills a need. 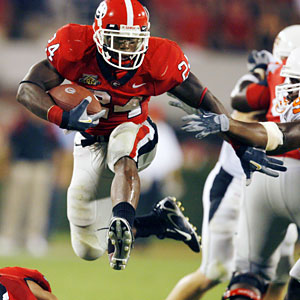 Moreno went to Georgia Tech, where he set plenty of records. He is a bruising back, with potential to be an every down back. More importantly, he would be a perfect replacement for Dominic Rhodes.

From the Star Telegram

Despite his pedestrian 40 times - he ran a 4.5 at the NFL Scouting Combine and a 4.59 at his Pro Day - Moreno and Ohio State's Beanie Wells are the top two running backs in the draft.

"I've got him graded higher than Beanie Wells," NFL Network draft analyst Mike Mayock said. "He's 217 pounds. He's got everything but long speed. In other words, his later quickness and burst is incredible. He makes people miss. His acceleration is incredible. He catches the football. He's a willing blocker in pass protection, which most of them aren't. The only thing he doesn't have is the ability to run away from people in the open field. But I'm a big believer in Moreno."

In only two seasons, Moreno rushed for 2,734 yards and 30 touchdowns on 498 carries. He joined Herschel Walker as the only running backs in school history with back-to-back 1,000-yard seasons.

More on Moreno can be found here.

Thanks to Stampede Blue for pointing me in the right direction.