IX-  Yesterday was the first day of OTA's (organized team activities) and a slew of important players were missing for one reason or another, including Tyrone Carter, Ryan Clark, Nick Eason, Larry Foote, Santonio Holmes, Willie Parker, Troy Polamalu and Lawrence Timmons.  Hines Ward was in attendance but did not participate because he is still recovering from rotator cuff surgery.  Ward did have time to talk to Steelers.com and might of put to rest whether he wants to finish his career in Pittsburgh.

"I want to be a Steeler, I don't want to put on another uniform. I'm late in the game now to worry about it. You look at all the previous players who went on and played at other places. I learned a lot from Jerome (Bettis) and what he did. I want to go down in Steelers history to be one of the better wideouts to wear the black and gold."

X-  NFL.com has video of Kevin Colbert and Mike Tomlin discussing the preparations that they still have left for the draft, and how they overcame the shortened schedule.  Colbert does mention that defensive backs are incredibly deep in this years draft and that their is plenty of talent to be found in the later rounds that can contribute to the Steelers this season and in the future.

XIII- Lamar Woodley threw out the first pitch at the Altoona Curve's home opener and from what the Altoona Mirror reports, it was quite possibly "one of the worst first pitches in baseball history."  I doubt that it could be any worse than the mayor of Cincinnati.

XIV- The Pittsburgh Steelers are in the process of ordering their unprecedented sixth super bowl ring.  The ring is supposedly double the size of the Super Bowl ring from Super Bowl XL.  I have seen Jerome Bettis' when he is working on the NBC Football Night in America program and that this is huge, I can only imagine how big the new ring will look. 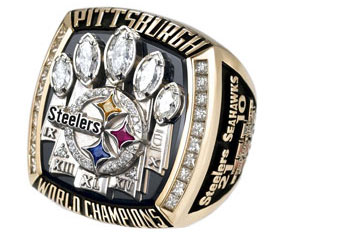 XL- Although the drafts defensive backfield is considered very strong by Kevin Colbert and many draft experts, the Steelers are still expecting major contributions from third year player William Gay, and Gay is showing his swagger in the OTA's.  He seems confident, but not overly so, as far as starting goes he says:

"It's just penciled in. That's all a starter means, that I'm penciled in for the first game. Matter of fact, take it back just to the first preseason game

XLIII- Every year the Mel Kipers' and Mike Mayocks of the world come up with these unique football terms such as "not football smart", or "Wave Player"  The Dallas Star Telegram put together a cheat sheet on the draft lingo to help those of us who feel like Kiper and his cronies are speaking in tongues.