Just about there with the 2009 BTSC Community Mock Draft. Double thanks to Steeler Buddha for the extra responsibility of picking for a team with two first round picks in this year's draft. Next up? The New York Giants, represented by Boston Wahoo. -Blitz-

A couple days ago, I drafted Michale Oher for the Iggles with the 21st pick in the draft. A day or two later the Iggles confirmed my instinct that they were going after a top of the line left tackle by trading their 28th pick the Bills 2 two time pro-bowler left tackle Jason Peters.

That move makes my current pick for the Eagles problematic in two ways. First the Eagles will no longer have a 28th pick. Second they no longer need a tackle with their 21st pick.

Let me explain.
No, there is too much.
Let me sum up.
Buttercup is to marry' Humperdinck in a little less than half an hour. So all we have to do is get in, break up the wedding, steal the princess, make our escape... after I kill Count Rugen.

What? Where was I? 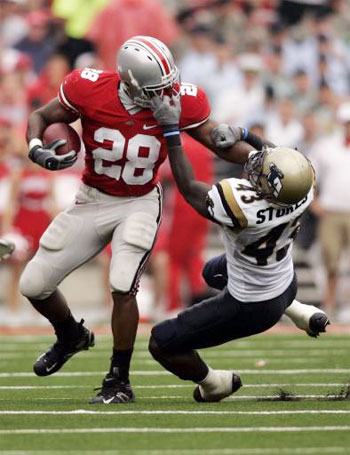 The Peters trade is a blockbuster in many ways. Along with the signing of the Stacey Andrews, the Iggles have invested $100 million dollars in upgrading their offensive line. Iggles fans are giddy and with good reason. On paper they have just bought the best offensive line in the league. Of course a lot of things look good on paper. Just ask Browns fans.

None-the-less you can't help but be optimistic about the Eagles chances. That leaves the franchise with a couple of different directions to explore. They always like value on the defensive line, but it's hard to argue based on current draft boards that they would take anybody still left. They might still go for TE if Pettigrew is available. But for the purposes of this draft the Eagles will take:

Now let me say clearly, I previously argued against Wells as a good fit for the Eagles system. My main complaint is that he does not catch passes out of the backfield, which seems to me like a pre-requisite for the Eagles approach to the game. But I think that with a great run blocking line in place and a speedy pass catching back with a couple of years left in the tank, the Eagles can afford to gamble on a Wells. Wells unique combo of size 6'1 235 and speed 4.59 40 - (he clocked as faster then Moreno) makes him an intriguing option to stick behind the new $100 million dollar O-line upgrade.