We're just about to the 32nd and final pick of the 2009 BTSC Community Mock Draft, with the final selection of course belonging to your six time SB champion Pittsburgh Steelers. First though, the 2008 runner-up Arizona Cardinals, being rightfully represented by the great cgolden. CG was a big reason why BTSC is what it is today so it's good to have him around, even if just for a wee moment before returning to his duties writing and managing Revenge of the Birds, SBN's fantastic Cards blog.  Next up? BigDaddytat2boy and Pittsburgh. - Blitz- 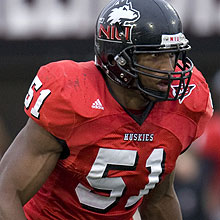 As much as Ken Whisenhunt and Russ Grimm would love to select a running back to improve the worst running game in the NFL, they spent enough time around the Steelers organization to know that outside linebackers make a 3-4 successful and running backs can be found after the first round. Of course if also doesn't hurt that Knowshon Moreno and Chris "Beanie" Wells were selected just a couple slot ahead of them.

The Cardinals haven't completely made the conversion to a true 3-4 defense but not having the talent at OLB is a big reason why they are still a defense in limbo. The run a odd looking hybrid front in which one side looks like a 3-4 defense and the other side has a 'predator' backer who almost always has his hand on the ground and for all practical purposes acts just like a 4-3 defensive end. Now assuming that the Cardinals want to continue moving towards a true 3-4, as Whisenhunt has said multiple times, they need some fresh legs. The current group of OLBs (I'm including the 'predators' in this group) includes three guys who are 32 or older, including former Steeler Clark Haggans (who is the youngest of the three), and one 27 year old who spent more time on the training table than the field last year. All of this adds to a simple conclusion, the Cardinals need an outside linebacker in the worst way.

The answer to that little problem hails from Northern Illinois and racked up 30.5 sacks over the past three seasons. Larry English will go through a tough transition moving from college DE to a professional OLB but with the current depth at the position, very little will be expected in his rookie year. With a year of seasoning he should be able to step into a starting role in 2010 once the current group of OLBs gets another year's worth of grey hairs. Here's the scouting report that we put together at ROTB:

Positives: English has a nearly perfect linebacker build and his quick burst and relentless motor make him a natural pass rusher. He uses his hands well and has a wide variety of pass rushing moves. He's also an agressive and physical tackler who's capable of delivering a punishing hit and causing his fair share of fumbles. In the run game, he shows good balance and the ability to stretch plays to the sidelines. His instincts are above average and he quieted one of his biggest question marks by performing well in linebacker drills, and more importantly in coverage, at the Senior Bowl.

Negatives: He's a good but not great athlete and doesn't have elite timed speed. He doesn't have the size or strength to be an effective bull rusher or be a strong force in the running game. Even though he can string plays out without giving up much ground, he can struggle to get off blocks against larger tackles. Despite a good performance at the Senior Bowl, plenty of people still question his ability to stand up and play in space. He was rarely asked to drop into coverage in college and will have to get used to playing with his hand off the ground. Durability is also a concern although his injuries have not caused him to miss many games. His level of competition at Northern Illinois is also a concern.

Overview: Few college players are as decorated as English. He was named the Mid-American Conference Most Valuable Player in 2007 and 2008 and he added the MAC's Defensive Player of the Year in 2008. He owns his school's sack record and has averaged 51 tackles, 16 tackles for loss and 10 sacks per season over the past three seasons. The book on English is pretty simple, he dominated his level of competition and few doubt his ability to rush the QB at the next level. The question mark though is whether or not he can develop into a complete linebacker and the answer to that question will likely define his career.