Rejoice!! Hines Ward To Retire With The Steelers

Share All sharing options for: Rejoice!! Hines Ward To Retire With The Steelers

This was of course posted earlier in the day, but with the selections being made at a fast clip during Rounds 1 and 2 of the 2009 NFL Draft all afternoon, perhaps not enough celebratory attention was devoted to the Steelers re-signing their career leader in Receptions, Receiving Yards, and TDs. And the team's most important leader. And the city's best community guy. And the guy that's most fun for us fans to watch play, loving every last time that the Hines Ward smile gets flashed following a big first down catch.

Ward, about to enter the final season of his contract, agreed Saturday to a contract extension that will pay him a lower salary than the $5.8 million he was to make this season but will make up the money in a signing bonus.

The deal was being finalized Saturday between the Steelers and Ward's agent, Eugene Parker, but is expected to be worth about $22 million over four seasons, although only a portion of that would be guaranteed. 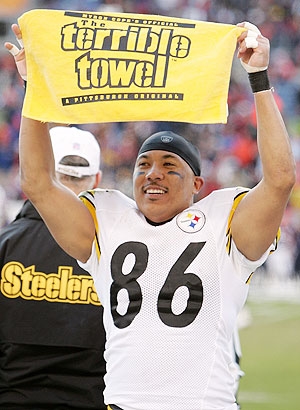 This is much better than any draft day present we could have gotten today. A big day tomorrow finding talent, particularly in Round 3, and we'll be in great shape to compete for Super Bowls in the immediate to intermediate future.