UPDATE: Rumor hails from PFT so be weary until we hear more, but Mike Florio is reporting the Steelers will soon be cutting veteran LB Larry Foote. Like I said, let's just wait and see, but being that this move makes plenty of sense for football and financial reasons, nobody should be surprised if this one gets confirmed in the near future. - Blitz-

IX-  In Ziggy Hood's introductory press conference he was asked if he watched this years' Super Bowl and in response he said he did and that he rooted for the Steelers.  He then said ""I saw little James Harrison scoop up the ball before halftime and took it right down to the end zone.""   Little James Harrison, are you kidding me?  I'm sure Ziggy will have a hard time living that one down during his rookie season.

X- Santonio Holmes knows a thing or two about how to end a game at the last second, as we all witnessed in SBXLIII, but on the Basketball court it looks like California University of Pennsylvania lady Vulcan's sophomore Kelsey Williams might be the true star.  Her last second buzzer beater tied up the game and in charity basketball that is about as exciting as you are going to get.

XIII- In the 2009 season of my Madden dynasty on X-Box I was forced to make a decision on a third wide-out since I couldn't afford Nate Washington on my roster just like the real Pittsburgh Steelers.  I decided to pick up Ashley Lelie on the free agent market as a fairly cheap rate.  I guess the Steelers front office doesn't just read BTSC, they are also hacking into my Madden 2009 dynasty, because the front office brought in Lelie for a visit yesterday afternoon.

XIV- Dan Rooney may be leaving for Ireland soon but he is collecting some additional hardware to take with him.  Rooney was just named the 2009 reciepent of the Horrigan Award, presented by the professional writers of America.  The award is given to a "player or member of the public relations staff who helped the media best do their job during the previous season."  More proof that we are losing a valuable piece to what makes the Pittsburgh Steelers one of the top franchises in professional sports.

XL-  A pretty good run down of the free agents that are Steelers have signed so far courtesy of Steelers Depot, check back periodically as they seem to update regularly.  This QB from Central Washington, Mike Reilly is evidently the second coming of Tom Brady according to Chris Mortensen of ESPN, who seems to be really high on this guys talent.

XLIII- Our friends over at One for the Other Thumb break down how irritating Ravens' first round draft pick Michael Oher's comments were about beating the Steelers.  Little Jimmy Harrison will make short work of Oher during his rookie season I'm sure.  Deebo had an adopted family once too, but he ate them. 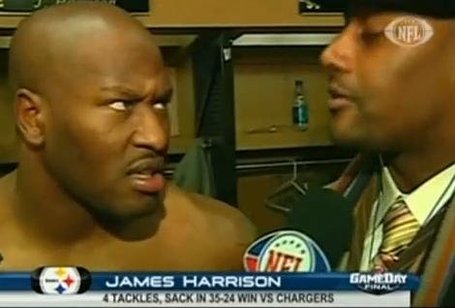