We continue on with the 2009 version of the BTSC Community Mock Draft with the Washington Redskins at pick number 13.   This pick continues what has been one of the more unconvetional mock drafts that I have seen on the web. Next up?  Our fearless leader blitzburgh, who will be selecting for the New Orleans Saints. - DYM

The Redskins managed again to make a big free agent splash with the acquisition of the 100 million dollar man, Albert Haynesworth, and they also threw a big contract at Dante Hall to sure up their secondary.  But overpriced high-priced free agents can sometimes lead to suspect depth or quality starters in other areas, and these moves forced the Redskins to cut ties with Jason Taylor and his 8 million dollar salary, and Defensive End is now a glaring weakness because even with the former Defensive Player of the Year, the Redskins only generated 24 sacks last season, which was 4th worst in the NFL. 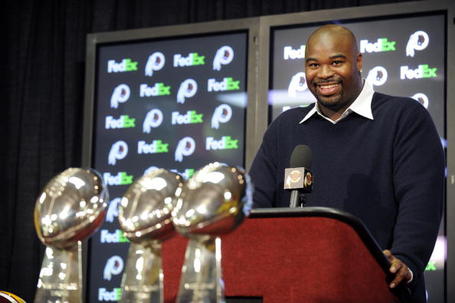 It should be no surpise then that I would consider the Redskins biggest need right now to be a pass rushing threat that can step in immediately and utilize Albert Haynesworth's ability to eat up space and create double teams.  The problem is in this mock draft the top four defensive ends have been taken off the board and the best left would be Tyson Jackson or possibly Robert Ayers, which I think could be a little high for either of these prospects, and theirs always a chance that a prospect with Connor Barwin or Larry English could fall into their laps in the second round. 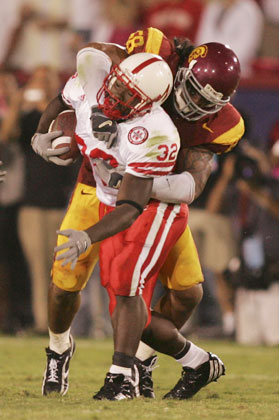 The other areas of need for the Redskins would be a versatile linebacker like Rey Maualuga from USC or James Laurinaitis from Ohio State.   A stud offensive tackle is also a need but since both Smith's and Monroe are off the board, they would need to look at Michael Oher, William Beatty, or Eben Britton which again might be too big of a reach at #13.

With all that said this mock draft has unfolded in a way that has backed the Redskins into a corner since many of the best players at their areas of need have been taken.  One area that the Redskins would have to consider would be Quarterback if the draft played out in this fashion.

The Redskins have 27 year old Jason Campbell who had a great start to last season, in fact in his first 8 games he was arguably an MVP candidate leading the Redskins to a 6-2 record with 8 touchdowns, zero interceptions and a QB rating of over 100 in half his games.  The Redskins and Campbell were ecstatic and even began contract extension talks, but Campbell essentially played himself out of a contract in the second half throwing 5 touchdowns, 6 interceptions, zero QB Ratings over 100, and a 2-6 record.  Campbell is heading into the last season of his contract and unless Campbell is lights out this season; his days as a Redskin are numbered.  The mock-draft has left the top two quarterbacks remaining on the board and the Redskins love to "Win the PR Battle," so there is no chance they let Stafford and Sanchez slip by they are still picking at number 13.  Stafford could potentially be the first pick in the draft and if he is available at 13 any team looking for a face of a franchise would have to consider him. 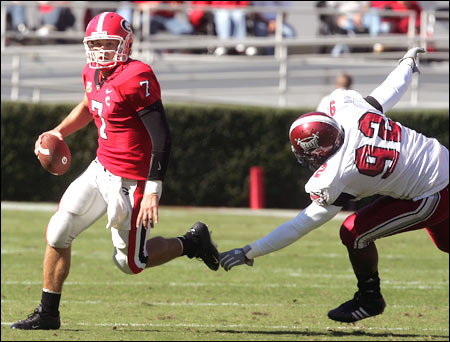 I won't go into the pro's and con's of Matthew Stafford because quite frankly you can watch sports center, NFL Network, or read any major draft website and get evaluations of the possible first pick in the draft ad nausea. Stafford could easily become a franchise quarterback for a team like the Redskins for the next decade or more if he can step up to the challenge of the NFL.  The Redskins have a good core of players in place and were nearly a playoff team in 2008, so with a new franchise Quarterback and acquisition of a the best free agent defensive player available the Redskins are looking to compete for a championship in the coming years.