A fine write-up and analysis of the Houston Texans' situation here at #15 by the wise and tuned in steeler lifer. No surprise there. Many thanks. Next up? Another draftnik picking for the San Diego Chargers, Steeler Mike. - Blitz-

Another draft year, another opportunity for the Houston Texans to close the talent gap on the other teams comprising arguably the best division in the NFL. They’re making inroads as evidenced by two consecutive 8-8 seasons, best in the franchise’s seven-year history. Last year they sent the Jaguars to the basement of the AFC South and they’re gaining ground on the aging Colts, who enter the post-Dungy era with some cracks in their foundation.

So what do the Texans need to take the next step under fourth-year head coach Gary Kubiak and get to 10 or 11 wins? 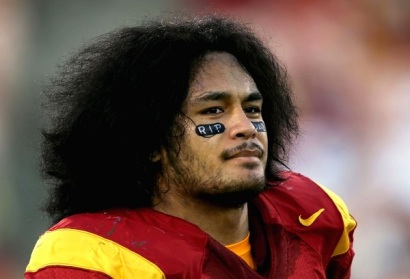 The offense is in pretty good shape. Led by WR Andre Johnson, TE Owen Daniels and outstanding rookie RB Steve Slaton the Texans ranked No. 3 in the NFL last year in yards per game (although only 17th in points per game). They could use some help in the interior of the offensive line, as well as a  power running back to complement Slaton and provide more punch in the red zone. They could use another wide receiver to take some of the pressure off Johnson and capable No. 2 WR Andrew Walter (60-plus catches each of the past two years). There isn't much depth after those two. Most of all, they could use a full season from starting quarterback Matt Schaub. Injuries have limited him to 11 games each of the past two seasons but, when healthy, he is an effective and underrated QB.

More help is needed on a defense that has speed but isn’t tough enough. The Texans especially need to be more physical around the line of scrimmage and put more pressure on the quarterback. The Texans have some good pieces in place. Defensive end Mario Williams might be the best 4-3 defensive end in the NFL. Athletic middle linebacker DeMeco Ryans made the Pro Bowl in his third season. Cornerback Dunta Robinson is very good. There is a big drop-off in talent after those three. Williams had 12 of the team’s meager total of 25 quarterback sacks. The other three starting D-lineman – tackles Travis Johnson and Amobi Okoye, and end Anthony Weaver – had a combined total of two sacks. Apart from Ryans, the LB corps featured Morlon Greenwood (released this off-season), injured Zac Diles, journeyman Kevin Bentley and rookie Xavier Adibi. While the lack of a pass rush from anyone besides Williams was a major problem, the Texans weren’t very good stopping the run, either, ranking 23rd in rush defense and 25th in yards per carry allowed.

The Texans found some help in free agency. They signed Arizona DE Antonio Smith (five-year deal) to replace Weaver and that’s a significant upgrade. They added Shaun Cody to the mix at DT and a good rotation of three or four DTs might produce better results. Okoye in particular could rebound from a disappointing sophomore season.  Former first-rounder Johnson is pretty much a bust but DelJuan Robinson has shown some potential and big Frank Okam could get some playing time in his second season. With the addition of Cody there are enough bodies in place to get more out of the DT positions but there’s no doubt the Texans would still be interested in adding a big-body disrupter to the middle of the d-line. Veteran OLB Cato June signed a one-year contract and should start at the weakside LB spot or provide veteran depth.

With the free agency additions on defense, and at this point in the draft, it’s tempting to add Beanie Wells to the offense. Slaton won’t last long taking a pounding game in and game out and the two of them would be a great combination of power and slashing speed. But the Texans found Slaton in the third round last year and they could have a shot at Shonn Greene or Rashad Jennings in the second or third round this year. I think the Texans need to draft the best defensive player available. For this draft I’m left with a choice among four players: USC MLB Rey Maualaga, USC OLB Brian Cushing, Mississippi DT Peria Jerry and LSU DL Tyson Jackson, who could be an effective run-stuffer at either DE or DT.

The Texans will probably consider trading down 10-15 spots and perhaps still have a shot at one of the four, as well as USC LB Clay Matthews, Tennessee DE Robert Ayers or even Boston College DT Ron Brace. But in this spot I think the best defensive player available is Maualaga. The other choices could all be nice complements to the Texans defense, and Cushing in particular seems like a perfect fit to play the vacant strongside OLB spot. He’s a physical player, a potential pass-rusher and has the quickness to cover backs and tight ends, but he has also had some injuries and to me he doesn’t have the same impact potential as his college teammate. There is nothing fragile about the 6-2, 250-pound Maualaga. 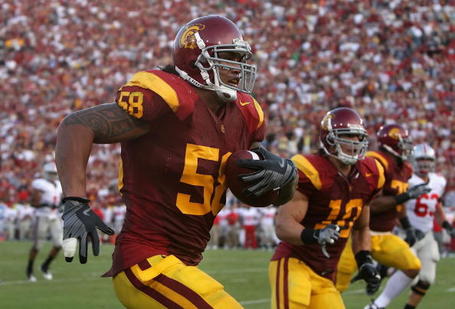 There has been a lot of talk about how he hasn’t tested very well and the combine experts tell us he is not fast enough to play all three downs, but in this division, with the power running games of Jacksonville and Tennessee, and Peyton Manning’s short passing game, Maualaga can make an impact by doing what he does best: getting the guy with the football on the ground, often via a violent collision. He could also help the pass-rush in blitzing situations, with the strength to overwhelm running backs on his way to the QB. Overall the Texans have a milquetoast defense that needs a nastier attitude and some intimidators. That’s what the confident Maualaga brings to the table every down.

He has some Ray Lewis’ cockiness in his play and that would be a welcome addition in Houston. Maualaga doesn’t have Ryans’ athleticism and speed, but he would bring a more intimidating physical presence in the middle of the field and Ryans, a star OLB in college, would be better at OLB than anyone the Texans could draft and quite likely among the best at that position in the NFL. Good players are often asked to change positions and it’s up to the coaching staff to figure out how to use two talented guys with different physical tools.