IX- Byron Leftwich was asked to win one game last year and he did that for the Steelers in Week 9 against the Washington Redskins.  Now the Redskins are sniffing around Leftwich to compete for their number two spot.   NFL teams love to sign guys that have burned them in the past, Wes Welker is a great example.  Bill Belichick said he watched him burn him twice a season for a few years and decided he would be a perfect fit for their team.  The reason Mike Tomlin signed Allen Rossum was because he had returned a kickoff for a touchdown against one of his former teams.  It's an interesting trend and it's possible that Leftwich could squeeze into the starting lineup in Washington with the newly unhappy Jason Campbell. 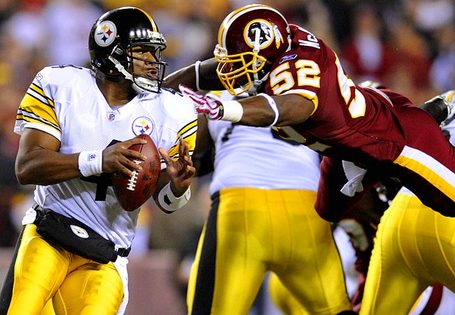 X- Twelve Steeler starters will be free agents after the 2009 season, and seven of those twelve will be 30 years or older.  The only consolation could be the extra effort that players tend to display during a contract year might give us a scary looking team that has it's sight on a third Super Bowl victory in 5 years.

XIII- The dates and times for the pre-season match-ups have been finalized for those fans that are planning on attending the four exhibition match-ups.  It looks like only one of the four games will be nationally televised, so all of us out of market fans will have to rely on the excellent commentary from BTSC.

XL- Cornerback is one area that the Steelers will certainly be targeting during the draft, but depending on which players are available we could take one as early as the first round, or wait until later in the draft for a player that might take additional time to develop.  Steel City Insiders goes over the top CB prospects in this years draft with insight on who the Steelers' covet and who might be available.

XLIII- Blitzburgh Blog has a post about Larry Foote and they think he is the most unsung talent on the Steelers roster.  My favorite guy who gets little publicity is newly re-signed LB, Keyaron Fox.  What player on the current roster or from the past do you think was or is the most unsung of his team?