IX- Do you remember when the Steelers had to make a choice to sign either Plaxico Burress or Hines Ward in the 2004 offseason?  At the time Plaxico was coming off some good years and had the physical tools to be a great NFL wide receiver, and Hines Ward was the undersized underdog.  But as usual Pittsburgh does its business different than other teams in the league and went out and made Hines Ward the face of the franchise.  Ward is everything that embodies Steeler Nation and everything that Plaxico Burress could never be no matter how hard he tried.

X- Could Chad Johnson Ochocinco be coming to play in Pennsylvania?  Of course he wouldn't be playing for the Steelers, but the Eagles are rumored to have interest in discussing a trade for the outspoken wide receiver.  Normally in the NFL trading a consistent locker room cancer and all around prima donna would signal that a team is tired of putting up with trouble makers and criminals, but not the Bengals, as they just signed another one yesterday. 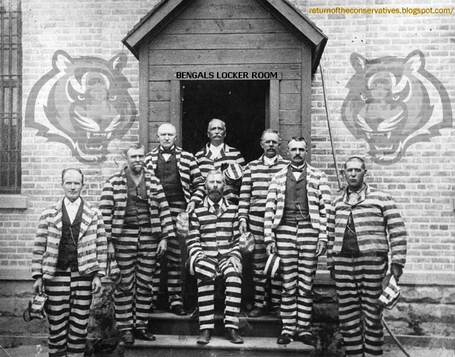 XIII- Being a professional football player isn't enough for 2nd year linebacker Patrick Bailey; in between working out with the team during the offseason he is also conducting an internship with Pittsburgh based Orbital Engineering.  The 2008 Joe Green Great Performance Award winner (given to the Steelers Rookie of the Year) is currently working with the sales department helping customers understand the product and utilizing his degree in a way that few active players do.  Sounds like the guy has a good head on his shoulders, so perhaps Blitzburgh is wrong about staying away from Duke players. 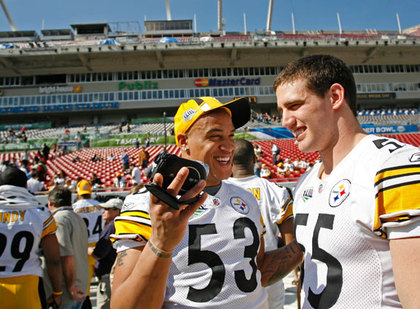 XIV According to Dale Lolley the Steelers will not be picking a QB or TE in this year's draft, and will begin working on their own mock drafts in the coming weeks.  How amazing would a job in the scouting department for an NFL team be?

XL-Yesterday I mentioned the reality the things we post on the internet are not anonymous. It looks like NFL scouts and personnel have figured this out as well and are infiltrating college prospects', Facebook, MySpace, Twitter, and blog pages to see what they are posting and what secrets they may have to hide.  They have even gone so far as to set up fake pages of women to follow and track the prospects.  It's a strange Orwellian society that we live in and those in the spotlight are finding that out very quickly.

UPDATE: According to Profootballtalk.com it's actually a violation of federal law to set up these fake accounts.

XLIII- Lots of questions and some half answers come from Ed Bouchette in his most recent Post Gazette Steelers chat.  He did reinforce that the Steelers will more than likely get a deal done with James Harrison before negotiating with other players with one year left on their contracts. He was also confident that the Steelers will get the best player available during their first round pick regardless of their needs at offensive line,cornerback, or defensive line.