Today's six pack will be a little different focusing on some previous mock drafts and some commentary after the draft.  This time of year everyone has an opinion on the draft and what their team will take and thanks to the internet we can go back and find out who was on the money and who missed the mark.  Thanks to PittsburghArn for the idea and some link assists.

IX- The 2003 Pittsburgh Steelers were coming off a 10-5-1 record and a loss in the Divisional round to the Tennessee Titans and were eager to improve their defense with some help in the secondary.  The Steelers traded up to get Troy Polamalu and also selected Ike Taylor in the 4th round. Back in 2003 mock drafts weren't as prevalent but I did find this mock that got the players wrong, but knew what Pittsburgh needed to select.  Sports Illustrated also had some interesting comments about future star Anquan Boldin's combine performance.

X- 2004 was the year that a franchise quarterback fell into our laps at pick number 11 following a disappointing 2003 season.  This mock draft was very impressive and had the 3 major quarterback going to the right teams and even had the Chargers and Giants trade projected correctly before the draft.  In review the Steelers got a B- from the same draft guru, mainly because Ben Roethlisberger wouldn't make an impact early in his career. I think we all know who that story has played out. 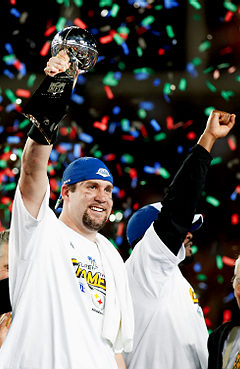 XIII- After the devastating loss to the New England Patriots in the AFC Championship game, Ben Roethlisberger promised to get Jerome Bettis the ring he deserved.  The front office hoped that the 2005 draft could help add depth and fill in the few holes that this soon to be championship team needed.  One mock had the Steelers taking drug addict Matt Jones in the first round and another had us taking Bryant McFadden a round early.  The Steelers received an "A" grade even though looking back it really only produced two starters, one of which left in free agency this season.

XIV- Coming off their 5th Lombardi trophy the Steelers had lost a few key players in free agency including Antwaan Randle El and Chris Hope and were looking to replace them in the 2006 draft.  The Steelers were projected in a few mocks to be either taking a wide receiver like Sinorice Moss, or a running back to replace Jerome Bettis like the fat lard Lendale White.   Luckily the Steelers traded up and grabbed our Super Bowl MVP for the Sixth Lombardi.  Draft grades were pretty kind to the defending Super Bowl Champs.

XL- Mike Tomlin's first draft after Bill Cowher's retirement  was full of surprises, but might have been one of our better drafts in recent history when we look back.  Lamar Woodley is coming off a great second year, Lawrence Timmons and William Gay are both looking to make major impacts next year, and Daniel Sepulveda looks to bounce back from an injury.  Mocks prior to the draft had us either stuck on Penn State standout Paul Posluszny or Jarvis Moss for our inevitable switch to the 4-3 under Mike Tomlin.  Grades for this draft were generally around a "B" or a "B-" as many were befuddled with trading up for a punter. 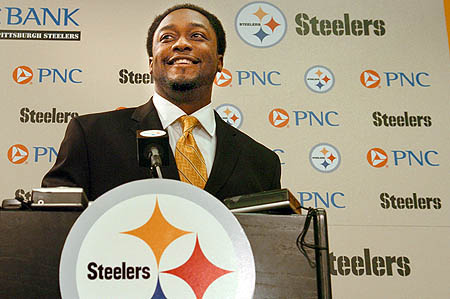 XLIII- It was only a year ago that you couldn't find a mock draft that didn't have the Steelers rebuilding our offensive line very early.   Although it came as no surprise to those of us on BTSC that Pittsburgh took the best player available instead of reaching for a lesser linemen.  Grades of the Steelers draft were very good considering we got a top 15 player and a first round talent without trading to get them.