As undrafted free agent rookie signings and free agent acquisitions wind down prior to the beginning of training camp this summer, BTSC will be taking a look at the various positional battles of note on the Pittsburgh Steelers roster. Let's begin with the linebacker position.

Additional Players on the Roster: 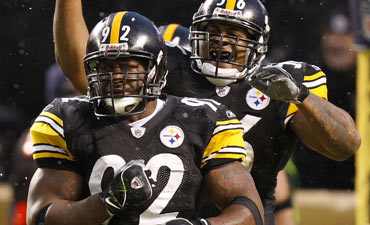 The tandem of Lamar Woodley and James Harrison set a Steelers record for most sacks by a pair of linebackers with 27.5.  It's remarkable to think that the 2009 season will only be Woodley and Harrisons' second season together as starters, and it shouldn't be surprising if they continue to get better next year.  If the two can remain healthy throughout the season I don't think there is a better duo of pass rushers currently playing in the NFL. Harrison and Woodley have the outside linebacker position locked down for the next few years, and I wouldn't expect any of the outside linebacking reserves to get signifigant playing time unless major injuries occur.

The Steelers have adequate depth at outside linebacker although it's hard to analyze as few of the players on the roster have much experience other than special teams play.  The most accomplished back-up at outside linebacker is Andre Frazier who has 42 career tackles and 11 sacks in limited playing time throughout his 5 seasons in the NFL.  After Frazier, Arnold Harrison has 23 career tackles in his three seasons of work and Patrick Bailey and Bruce Davis are both going into their second seasons in the NFL.  Bruce Davis' first season in Pittsburgh would probably be considered a failure by most considering he didn't hit the field long enough to register even one tackle.  Davis seems to have the right attitude though and is looking to make a big impact on special teams this season, he recently said:

"The way it worked last year, I got to sit back and learn watching the best defense in the game. Until my number is called to make plays on defense, I'm going to play special teams like I'm out there playing outside linebacker. I'm going to go as hard as I can and try to knock some people out."

Inside Linebacker on they other hand doesn't have a lot of depth; according to the Steelers website the only players on the roster who are listed as Inside Linebackers are Farrior, Timmons, and Keyaron Fox.  Fox was re-signed this off season to a modest two year deal and looks to be the primary back-up at middle linebacker. Pittsburgh is also exploring some additional veteran help by bringing in former first round draft pick Napolean Harris for a visit and his connections with Mike Tomlin make me think this move is somewhat likely.  According to Datruth4life the guy to watch out for is second year man Donovan Woods, who is listed as an OLB by the Steelers website, but I tend to think that his size (6-2, 230lbs) makes him better suited physically for the inside. Woods was very promising last year at training camp and started off very strong in the early part of the season before he was sidelined off and on for the rest of the season with hamstring issues.  If he gets through training camp and the preseason healthy he has a great opportunity to win himself a spot as a valuable reserve. 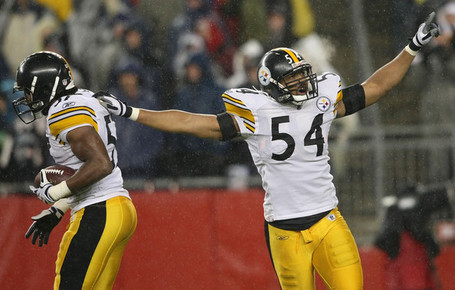 Although Woods appears promising, when the Steelers get to Latrobe I would be quite surprised if they don't have another veteran live body or two to compete for the 4th inside linebacker spot.  It's not Mike Tomlin's style to hand out roster spots without a heavy dose of competition.  Two long shots in the equation are Tom Korte, an undrafted rookie free agent from Hillsdale college, and Andy Schantz another undrafted rookie free agent from Portland State.  Korte excelled at Hillsdale leading the team in tackles 3 straight seasons and picked up numerous awards for his play.   Korte and Schantz will probably need at least a season on the practice squad before they are ready to play, but Korte is already making an impression on the coaches after intercepting Charlie Batch during the first mini-camp.

Besides the health of the unit I believe the key to our Linebacking corp next season will be the emergence of Lawrence Timmons.  Timmons was the first draft pick in the Mike Tomlin era and will only be 23 years old heading into his third season in the NFL. Timmons athleticism should allow Dick Lebeau to come up with a variety of schemes to give offensive coordinators around the league nightmares.

In his limited playing time last season, mainly on passing downs, Timmons put together a very solid stat line.  Timmons had 65 tackles, 5 sacks, one forced fumble, and an interception during the 2008 season. With the departure of Larry Foote, Lawrence Timmons' speed and size should allow the Steelers to get pressure on opposing Quarterbacks from a position they weren't able to in the past.  The added pass rush from Timmons should also help to create more opportunities for the best outside linebacking tandem in the NFL and will hopefully lead to a third straight season as the number one defense in the NFL. 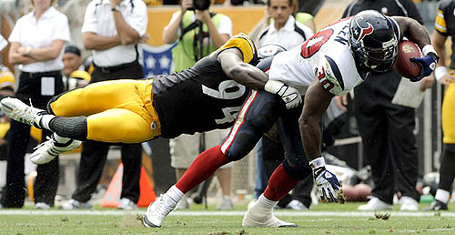 So there you have it BTSC, feel free to chime in with who you think will make the roster and what expectations you have for the Linebackers in 2009 season.