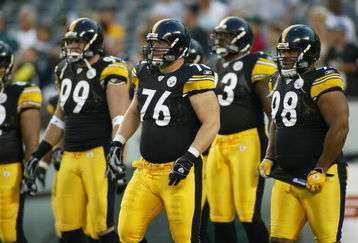 Additional Defensive Lineman on the 2008 Roster:

In 2008 the Pittsburgh Steelers once again had one of the most dominant defenses in the NFL, allowing only 80.3 rushing yards per game thanks in large part to one of the best defensive lines in the NFL.  The three main starters consisting of Hampton, Keisel, and Smith combined for 123 tackles, and seven and a half sacks.  Casey Hampton missed three games due to injury and Brett Keisel missed six, while Aaron Smith started all 16 games for the sixth time in his ten year career.

In addition to Mitchell's outlook, more good news for Steelers fans is first round draft pick Evander "Ziggy" Hood from Missouri University.  Hood is 6'3, 300lbs and will likely get a chance to contribute in a reserve role as a defensive end this season.  The Steelers also drafted Ra'Shon Harris in the 6th round of the 2009 NFL draft, who is very similar is size to Ziggy at 6'4, 300lbs, but is a much more raw prospect that will likely spend the year on the practice squad. Through the draft Pittsburgh was able to get a young defensive end who should challenge for a starting spot in 2010 and added another young defensive end who has some potential to earn a roster spot in a few years. 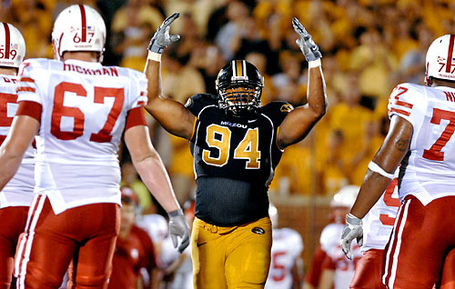 In addition to our 2009 draftees the Steelers also have a strong pipeline of younger unheralded free agent signings, including former Penn State stand out Scott Paxson who spent his rookie season on the Steelers roster although he was deactivated on game days.  In my opinion having Paxson on the roster must of been a sign that the Steelers saw enough in him to feel he could contribute on gamedays or they felt he would be snatched up from the practice squad; either way it is a good sign for the 6'4, 292lbs Nose Tackle.  Other Defensive lineman on the roster going into training camp include second year man Jordan Reffett, and two undrafted rookie Defensive lineman Jeff Bradley, and Steve McLendon.  The only player out of this group that I see having a chance to be active on game days would be Scott Paxson although he probably still needs to gain some additional weight to handle the duties of a Nose Tackle in a 3-4 defense.

The three starters from last season will remain starters going into the 2009 season unless a major injury or in Casey Hamptons' case an eating disorder takes place. Aaron Smith may not get much recognition from the national media but he is quite possibly the best 3-4 Defensive End in the NFL and Casey Hampton would still be considered a top tier nose tackle.  The other starter Brett Keisel has been consistent but not spectacular and like Hampton he will be playing in 2009 to earn another contract in 2010 with either Pittsburgh or another NFL franchise. 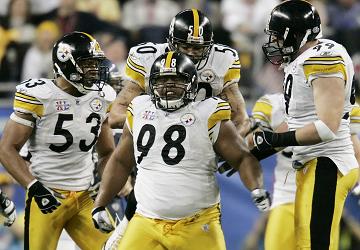 Even though there are likely to be few real position battles for the starting spots, the battles for the reserve spots should be ultra competitive and could be full of some surprises.  I expect Ziggy Hood to be the first or second defensive end reserve along with Travis Kirschke or Nick Eason.  Kirtchske showed no sign of slowing down last season despite being 34 years old.  In fact, last season Kirschke appeared in all sixteen games, starting six and had more tackles and sacks than starter Brett Keisel.  Quite impressive for a guy who is largely ignored when fans talk about the Steelers' defensive line. Kirschke's performance last season could  leave Nick Eason the odd man out in the competition for a roster spot.  That is unless Eason is able to show that he can play near or on the same level as Travis Kirschke , which in my opinion he has yet to do.  With that said Eason does have one advantage on his side and that is his age, being six years younger than Kirschke is certainly an advantage and if he can show enough in training camp and the pre-season it will be a difficult decision for the coaching staff to make.

The back-up to nose tackle Casey Hampton will most likely continue to be Chris Hoke as he is under contract for an additional three seasons and has consistently stepped in admirably for Casey Hampton when injuries have occurred.  The other reason Hoke is so important is the older Hampton gets the less snaps he is going to be able to handle.  So having a competent back-up who can demand double teams from offensive lineman is very important in our 3-4 defense.  The only other player on the roster that could play the reserve nose tackle role is Scott Paxson, but it is doubtful that he will be able to beat out Chris Hoke, especially without gaining more size and strength.

Overall I don't foresee much change with the 2009 defensive line as compared to the 2008 group.  The addition of Ziggy Hood will likely force out either Travis Kirschke or Nick Eason, but the rest of the core group will stay the same.  I expect Ra'Shon Harris and Scott Paxson to either be on the 53 man roster but inactive for game days or be stashed on the practice squad.  Perhaps one or two of these undrafted free agents from the 2009 class will come to camp, surprise everyone and grab a roster spot, however unlikely.  Regardless of what happens to training camp if we can remain healthy on the defensive line we will again be suiting up one of the better defensive front lines in all of football.