The Butler Did It: Steelers of Glory Past

An old piece from maryrose on Jack Butler, before Butler finally received the long-awaited and well-deserved induction into the Hall of Fame last year.

Share All sharing options for: The Butler Did It: Steelers of Glory Past

Special thanks to former Steeler Jack Butler for taking time to chat with BTSC about the good ol' days. He was truly one of the great ones.

In October of 2008, Jack Butler was selected as one of the top 33 Pittsburgh Steelers of all-time. That should grab your attention right there. Butler was born in Pittsburgh and went to college at St. Bonaventure. Because St. Bonaventure has never been noted for being a football powerhouse (the school dropped the program a year after Butler graduated), Butler would have never played in the NFL except for one small matter. The Athletic Director at St. Bonaventure was a priest named Father Dan Rooney, brother of Steelers' owner Art Rooney. He signed as a free agent defensive back.

Butler played nine years for the Steelers, 1951-59, and was getting better with each passing year, until he blew out a knee in the middle of the 1959 season. In those days, the dark ages of sports medicine, a major knee problem was all she wrote. In his last two full seasons, Butler intercepted 19 passes, a remarkable number considering they only played 12 games a year. His playing career short but brilliant, Butler ended up with 52 interceptions. Up until and through his time, only two NFL players intercepted more passes than Butler - Emlen Tunnel and Dick Night Train Lane. When the decade of the '60s began, 50-plus career interceptions was a group that you could count on one hand with two fingers missing.

Butler had a game that you can only dream of on December 13, 1953 in our nation's capitol. While out-rushing and out passing the Washington Redskins all game, the Steelers trailed after three quarters, 13-0 (typical for the Steelers in those days). Getting lost in the score was the outstanding game Jack Bulter was having. He had intercepted the great Eddie LeBaron three times. Finally, in the fourth quarter, the Steelers put a touchdown on the board to at least avert the shutout. Late in the game, down 13-7, Butler capped the game of his life by picking off LeBaron a fourth time, an NFL record still never broken, and taking it to the house for an electrifying 14-13 Steelers victory.

"I remember him well," recalls Butler. "I was a defensive back who always wanted to be a receiver. After practices I enjoyed catching passes. Unitas wasn't even getting into practice (1955 preseason), so he wanted to throw the ball after practice. The first thing you noticed was how awkward he looked, but his passes were perfect. He knew exactly where to put the ball in relationship to a defender. I thought, 'my goodness, what a great arm,' but the coaches never saw him throw."

Butler will never forget the day Unitas was cut. The two were together. After an exhibition game at Forbes Field, they drove back to Olean, New York, where the Steelers trained.

"Johnny told me in the car, 'I think they are going to cut me,' lamented Butler. I told him they couldn't cut him since they never saw him throw. Johnny said, 'that's the problem. They won't give me a chance.' Anyhow, we get to Olean in time for dinner. After dinner we were walking to the dorm and Kies (Head Coach Walt Kiesling) tells Johnny he was cut. They sent him back home to Pittsburgh. I don't know why Kiesling made him drive all the way to Olean just to send him back home, but given the future ramifications of it all, I guess it was par for the course."

Though his injury ended his playing days, Butler's time in the NFL was still in its infancy. Prior to the early 1960s, scouting and drafting were crude practices that were often counterproductive and cost-ineffective. Scouts from several teams would often find themselves in the same little off-the-beaten-path town learning the same information. Sure enough, it was the Pittsburgh Steelers who spearheaded the NFL's very first scouting combine. It was in the early 60s and it was called LESTO, standing for Lions Eagles Steelers Talent Organization. The Bears jumped on board soon thereafter and the name became BLESTO. Today's world of televised combines and sophisticated pro days began in Downtown Pittsburgh under the leadership of Ken Stilley, a former Steelers assistant coach.

Butler, took over operations of BLESTO in 1963 and held the leadership post for 44 years, until his retirement in 2007. BLESTO still operates today for at least seven clubs, but it is certainly no longer the only talent evaluation organization of its kind. Of all the things Jack Butler could be proud of, creating the first combine is at the top.

"We actually started the first combine in the NFL in the early 60s," claimed Butler. "It wasn't known to the public, but it was a huge development in the league. At first we brought in college seniors for physicals, because the rules wouldn't allow us to test them. The NFL realized how ridiculous it was to arrange all these kids coming together and not taking advantage of the opportunity. So they took away the rule and allowed all the teams to partake in testing and review. That was the creation of the first combine." 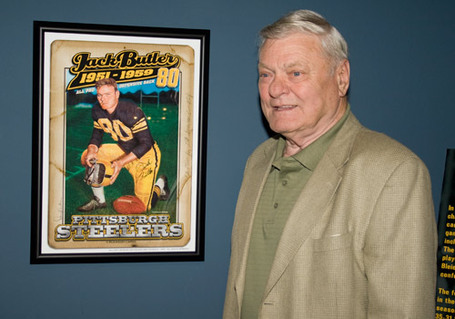 If anyone is qualified to speak to the merits of the Rooney Family, it is Butler. He is still today a very close friend of Art Rooney Jr., who knew a little bit about scouting himself back in the day.

"The Rooneys have always had an uncanny knack for knowing just the right touch when it comes to relationships. The Chief would come to practices and come into the lockerroom and make you feel like he really cared about you. At the same time, he never got too close to compromise his responsibility as an owner. Dan was the same way. Some owners are meddlesome, some are too remote. The Rooneys understand the fine line and maintain the perfect distance."

Ask just about any Steelers old-timer to name one player from the organization who should be in the Pro Football Hall of Fame. The answer you will hear most often is Jack Butler. The Hall of Fame has rigid guidelines, which explains why folks like Dick Hoak and Art Rooney Jr. don't fit into any standard mold. Butler is another one. I firmly believe he will someday have a bust in Canton, but I'm afraid he may not be around to see it. Someday the voters will realize that a 55-year career in the NFL, as both a spectaculer player and innovator, is the the reason why halls of fame exist.