The 12 Most Heartbreaking Playoff Losses In Pittsburgh Steelers History: #12 - #10

Share All sharing options for: The 12 Most Heartbreaking Playoff Losses In Pittsburgh Steelers History: #12 - #10

Yes, a series of articles talking about heartbreaking playoff losses is a painful journey down memory lane, but I figured now is the best time to take such a journey. With Steeler Nation still basking in Super Bowl glory, having snatched two Lombardis in four years, nothing can feel too bad these days. It is best to discuss the wounds of the past under the euphoria of the present.

This series will outline 12 heartbreaking playoff losses in Steelers' history, in reverse order from 12 to 1. The first two parts of the series will each address three games; the next two parts will each discuss two games and the final two parts will be devoted to single games, the runner-up and champion. Of course, these games and the order in which they are placed are purely arbitrary and in some ways, personal. Surely some will remember other games that they would replace on the list and for that matter, I am sure we would all have the list in different orders. That's great; that's what we're here to talk about.

The Steelers were coming off a thrilling sudden-death win in the Wild Card game at Houston when Gary Anderson nailed a 50-yard field goal in overtime. It was Chuck Noll's last great win. Pittsburgh was not expected to hang with top-seeded Denver, but did so for the entire game at Mile High Stadium. Trailing by just one point with time running out, I can vividly see Bubby Brister's pass beautifully thrown to a guy named Mark Stock around the 50-yard line. All we needed was the great Gary Anderson, again, to get to the AFC Championship game. Stock drops the pass so well thrown it makes Jackie Smith's drop look like a circus catch. Season over. Stock, a 1988 graduate of Virginia Military never played before 1989 and never for the Steelers afterward, but his name will live in infamy in my memory. He became a much better man than football player, a commissioned U.S. Army officer in Operation Desert Storm and then later becoming a real estate guru. However on that day, we lost by one point. 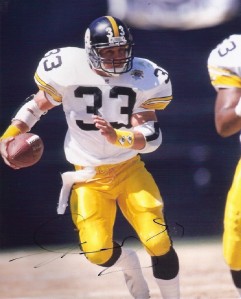 1989 was one of Chuck Noll's finest years in coaching. The Steelers lost their opener, at home, to the Cleveland Browns by a score of 51-0. They lost the second game, 41-10 to Cincinnati. It would have been very easy for the season to go right in the tank, but Noll would not allow it. The Steelers avenged the Cleveland loss at Lake Erie and then won five of their last six games to sneak into the playoffs. They continually improved as the season wore on and became very dangerous in the end. Against Denver in the playoffs, the Steelers out rushed the Broncos badly, 175 yards to 138 yards; and out passed the Elway-led Denver team as well. Merril Hoge had the game of his life, racking up 120 yards on just 16 carries, while Pittsburgh dominated time-of- possession by nearly 10 minutes. Hoge also caught eight passes for 60 yards. The Broncos had no answer for him. Denver went on to easily beat Cleveland, and then was unmercifully smoked by San Francisco in the Super Bowl. Mark Stock, one point, sorry Merril.

Any overtime loss in the playoffs is automatically a heart breaker. What added some mustard to this one was the fact that the Steelers never trailed in this game until it was over. The Steelers didn't have an exceptional offence, but the defense, soon to be called "Blitzburgh," was starting to come into its own. Gerald Williams sacked Joe Montana three times and Pittsburgh led at half,17-7, and still led after three quarters, 17-10.

The six-seed in the tournament, the Steelers were looking good after Neil O'Donnell marched them 74 yards into the end zone in the middle of the fourth quarter, on a 22-yard pass to tight end Eric Green. Late in the game with Pittsburgh leading, by a touchdown, the Chief's Keith Cash blocked a Pittsburgh punt and Fred Jones returned it to the Steelers' nine-yard line. After gaining just two yards in three plays, Joe Montana hit Tim Barnett with a seven-yard touchdown to tie the game and send it to overtime. There Nick Lowrey kicked a 32-yarder to send the Steelers home. The Steelers lost a playoff game when one fourth-and-goal stop at the seven-yard line with just 1:43 remaining would have continued their season. The Buffalo Bills would defeat the Chiefs to represent the AFC in the Super Bowl. Earlier in the season, the Steelers demolished Buffalo, 23-0, on a Monday night. 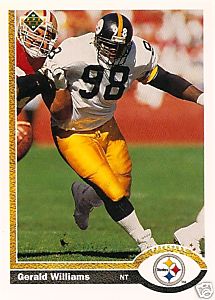 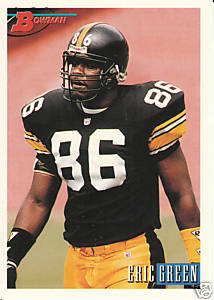 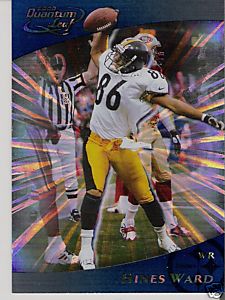 After a thrilling come-from-behind win against Cleveland in the Wild Card game, the Steelers went on the road and played Tennessee toe-to-toe. After the Titans jumped to a 14-0 lead, the Steelers stormed back with four unanswered scores to lead 20-14. Tennessee answered with two touchdowns to lead 28-20, and then Pittsburgh scored twice to lead 31-28. The Titans kicked a field goal to send it in overtime. This game was really exciting because each team kept coming back. There was not a lot of defense. While neither team rushed for 100 yards, Tennessee racked up 430 yards to Pittsburgh's 324. Hines Ward scored two touchdowns for the Steelers while Steve McNair and Frank Wychek were trouble all day on the other side.

There is very little I dislike about the NFL. It is the fairest sports system on the planet. One of the few exceptions is the league's overtime format. We lost the game because we lost the coin toss. We never got the ball. Making matters worse, the Titans actually missed the 31-yard winning field goal and we should have gotten the ball, but a ticky-tack running into the kicker penalty by Dewayne Washington gave Tennessee yardage and another shot. Joe Nedney connected on a short 26-yarder and the game was over.

Sometimes the pain of a loss is heightened or reduced by how good future opponents are, at least in my mind. For example, that 1989 playoff loss would have eventually led to the San Francisco 49ers, a team who destroyed Denver with embarrassment. Yes, I would love to get there and yes, anything can happen, but reality tempers pain in my world. This particular year, the Titans next lost to the Raiders who next lost to the Buccaneers in the Super Bowl. In my mind, they were both extremely beatable. But who knows, maybe Tampa Bay's defensive backfield coach, Mike Tomlin, learned a thing or two about winning Super Bowls that would help him down the road.

Joe Nedney Earned His Way Into the Screen Actors Guild Hall of Fame; Hines Ward Showed Why He is a REAL Hall of Famer