IX-Starting center Justin Hartwig has broken one of his toes according to Dale Lolley after dropping an object on it recently.  Although the injury shouldn't affect his ability to play during the regular season, he may miss some of the early parts of Steelers' training camp.  I guess this will set up a little more competition between backups Darnell Stapleton and A.Q. Shipley.  My biggest concern is with the Steelers line trying to build more continuity, having the starting center miss significant practice time could slow down the progress. 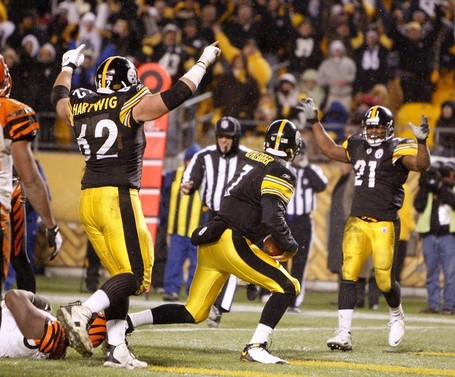 X-Peter King is using some guest NFL writers to fill in for his Monday Morning Quarterback column while he is taking a vacation during the heart of the offseason.  This weeks guest writer is Washington Redskins Tight End, Chris Cooley, and his version is much more interesting that those written in previous weeks by Trent Green, and Matt Birk.  In fact, Cooley knows it and takes some humorous shots at those two.  Cooley advocates for the NFL to use technology to avoid controversial calls like Santonio Holmes controversial touchdown against the Ravens.  How does the BTSC Nation feel about "smart football" as he calls it?

XIII-If you sign up for text message alerts on your mobile phone through the Pittsburgh Steelers you will be entered in a contest to win an autographed Hines Ward jersey.  To sign up for the alerts send a text message saying "HINES" to 94253 (WHALE).  For additional details and complete contest rules be sure to check out the Steelers' Official Website.

XIV-Ben Roethlisberger and Eli Manning careers' will inevitably be compared forever by pundits, bloggers, and fans due to both of them being drafted in the 1st round of the 2004 NFL draft, if Phillip Rivers wins a title his name will surely be brought into the conversation.  ESPN's AFC North blogger, James Walker debates that there is absolutely no comparison between Manning and Big Ben considering Ben has better statistics in touchdowns, interceptions, wins, and quarterback rating, all while having a weaker offensive line and a less productive running game.  Matt Mosley of EPSN's NFC East blog puts together a decent counter-argument exposing some of the holes in Walkers' piece.

XL-Troy Polamalu will be trying to avoid the Madden curse after gracing the cover of Madden 2010 alongside Larry Fitzgerald.  James Walker of the AFC North ESPN blog goes over the rankings of each team in the AFC North in the upcoming release of Madden 2010.  In terms of the rankings EA Sports has assigned to the four teams, Pittsburgh is clearly the class of the division according to Walker.  In fact the Steelers have five defensive players with an overall ranking of 91 or above and Troy Polamalu has an astonishing overall ranking of 99.

XLIII-The Penguins got some love here during their season and the Pirates should be no different.  A lot of Pittsburgh area sports fans lose track of the Pirates losing, including me.  Mondesi's House is here to provide a recap of the first half of the Pirates season, and what to expect during the second half.  The All-Star game is on Tuesday, and the most interesting part of the baseball season, the Home Run Derby, is tonight on ESPN at 8PM.  Here are some odds on each participant for the event.