IX-Derrick Mason who has spent twelve years in the NFL with the Titans and most recently the Ravens announced his retirement unexpectedly yesterday.  It was a surprising move from Mason who worked out earlier in the day with the Ravens.  Our friends over at Baltimore Beatdown and others in the Media are speculating that the sudden murder of his close friend Steve McNair may have sparked Mason's retirement.  Others are speculating that Mason is simply playing hardball with the Ravens to get a new contract since he hasn't yet officially filed retirement papers.  Mason has over 10,000 career receiving yards and whether it was with the Titans or the Ravens he always seemed to be a Steelers' Killer.  Shutdown Corner even made a post contending he may be one of the top 4 receivers in the last decade, his numbers in receptions and reception yards are slightly below that of Marvin Harrison, Randy Moss, and Terrell Owens. 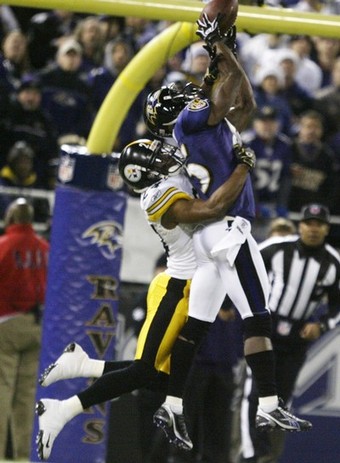 X-Lawrence Timmons posted his second post Super Bowl blog last week which you can read here where he lists his favorite spots in Pittsburgh.  Red Lobster seems a little strange to be included on the list, but hey, I enjoy some "Shrimp Fest" as much as the next guy.  Anyways, our friends over at Pittsburgh Sports and Mini Ponnies, noticed that Timmons isn't quite sure who is the Head Coach of the Pittsburgh Steelers. In his post Timmons refers to Mike Tomlin as "Coach Tomlinson."

XIII-Steelers beat writer Scott Brown answers two readers questions about Heath Millers contract status and how much impact Lawrence Timmons had on the field last season, nothing particularly ground breaking.  But I do agree with Brown that Heath Miller will be in a Steelers uniform next season even if it means using a franchise tag if the collective bargaining agreement is settled.  The franchise tag for a tight end would also be fairly reasonable and a lot less costly than the one that was going to be used on Max Starks this year. Titans tight end, Bo Scaife was tagged this season at approximately 4.4 million dollars.

XIV-Rocky Bleier and Franco Harris are starting a foundation to help memorialize the heroes from the 2001 Flight 93 crash.  "The goal is to open the $58 million, 2,200-acre memorial in Shanksville [PA] on Sept. 11, 2011, the 10th anniversary of the attacks on the World Trade Center and the Pentagon."  Forty Four people perished in the crash and the site of the crash will be where the memorial is eventually placed. 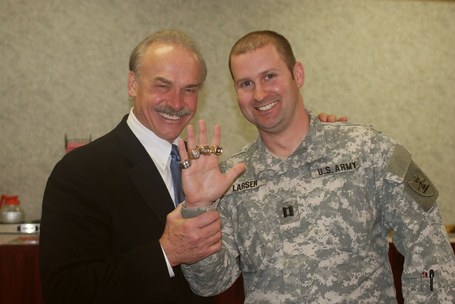 XL-Montana, Marino, Namath, Unitas, and Blanda are some of the top names that come to mind when thinking about quarterbacks who were raised in Western Pennsylvania.  One name that most BTSC'ers may not be aware of is Johnny Lujack, who is having a training facility dedicated in his name this weekend in Connellsville, PA and he will also be inducted into the inaugural class of the Fayette County Sports Hall of Fame.  I'm not sure if Lujack was before the times of Maryrose or Swissvale72, but perhaps they will be able to shed some additional stories on Lujack.  The article states that he was a three time national championship winner with Notre Dame, a Heisman Trophy Winner, and a four sport Letterman.  In the pros he played Safety, Quarterback, and kicked field goals for the Chicago Bears.

XLIII-Over the weekend I watched UFC 100, which was easily one of the biggest if not the biggest MMA events of all time.  In the event former WWE superstar and former collegiate wrestling standout Brock Lesner showed that he is going to be a force to be reckoned with in the UFC for a while.  Steeler fan, BTSC member, and devote MMA fan Zak Woods has his own MMA blog on SBNation called, Watch Kalib Run, and I would recommend you stop over and check it out if you are a fan of the sport, or just interested in learning a little bit more.