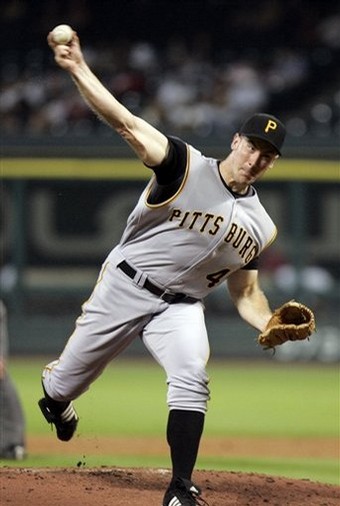 Changing gears just a bit here on Behind The Steel Curtain as we patiently await the start of training camp later this month. Today we have an interview with a good friend of mine - Ross Ohlendorf, a starting pitcher for the Pittsburgh Pirates. Ross was kind enough to answer a few questions for me during the All Star break festivities of Major League Baseball.

The Pirates currently stand at 38-50 in the NL Central, 9.5 games behind the St. Louis Cardinals. They are however just 8 games back in the loss column of the Cards and 6 games out of third place. With the division seemingly a three or four team race at least, the Pirates could very well find themselves back in the thick of things if they could get on a couple week run. I spoke with my old friend, Ross Ohlendorf, about his first season with the Pirates during the All-Star Break. Ohlendorf is currently 7-7 with a 4.64 ERA. He has a solid 2:1 K/BB ratio  The interview can be found after the jump.

1) First of all, congratulations on your 7 inning, 2-hit shutout gem a few weeks ago that was highlighted by 8 strikeouts and 0 walks. That gives you 7 wins for the year, tied for 23rd most in all of baseball and good for second most on the Pirates (Zach Duke 8). Being that this is your first year as a regular starter since 2006, do you feel pleased with your individual progress making the transition to pitching every five days rather than out of the bullpen?

Ohlendorf: There have definitely been some bright spots so far this year, and overall I have been pretty happy with how it has gone.  I will be working hard the second half to develop better consistency start to start.  One of my strengths in 2006 was consistency and believe it will be again.

2) How does a young pitcher negotiate 'pacing' himself over the course of a long season, particularly after spending the previous two years pitching in relief where 'saving' one's arm is less important? You've of course been clocked in the mid to high 90s, but seem to be trying to 'pitch' rather than merely throw hard now that you're starting. On a somewhat similar note, are there days out there where you just feel significantly fresher or looser out there on the mound and what kinds of things do pitchers think about when they know they don't have their best stuff or aren't feeling their best physically?

Ohlendorf: There are definitely games where you feel better than usual and games where you feel worse, but surprisingly feeling better does not always mean you will pitch better.  Pitchers may tend to overthrow when they are feeling good, which can make them less effective if it takes away from their command and movement.  In terms of pacing myself, I don't throw as hard between starts as I did in college or as a reliever, but when I am in the game I do not necessarily think about pacing myself.

3) Switching gears here - how are you liking Pittsburgh so far? How does it compare to living in the New York area where you were pitching last season?

Ohlendorf: Pittsburgh has been much more liveable.  I have a nice apartment close to the field and pay less than I did driving over an hour each way to the stadium in New York.  The fans are great and the stadium is awesome.  It was fun to play for the Yankees, but I am really enjoying being in Pittsburgh.

Ohlendorf: I really like a restaurant called Eleven, though it is expensive.  I eat at Atria's quite a bit - it is attached to the field and they have really good salmon.

5) Favorite book you've read since the start of the season?

Ohlendorf: I've read a few good ones.  I read mostly detective type books and just finished All That Remains by Patricia Cornwell which was really good.

6) I've played a few games of cards with you over the years and I know you're never shy about splashing some chips in the middle of the table. Do you and your teammates play on the road? Any player you particularly enjoy playing against?

Ohlendorf: We play a game called pluck quite a bit.  It is similar to spades but easier to keep score without writing.  We play on the plane and during rain delays.

7) Anyone who knows you knows how modest you are for all your tremendous accomplishments athletically, scholastically and even with you and your father's business venture/hobby raising Longhorn cattle back in your native Central Texas. What was it like having a feature article written about you by ESPN's senior writer Tim Kurkjian. He seems like a really nice man in addition to a great columnist and baseball historian.

Ohlendorf: I enjoyed getting to talk to him when we went to DC, a couple weeks before he wrote the article.  He is obviously incredibly knowledgeable and passionate about the game.  He asked great questions and was very nice as you mentioned.  I have also really enjoyed talking to Peter Gammons a couple times over the last few years.  The article was really cool, though it may have been a little over-complimentary...

8) Did you catch Penguins fever at all during the team's run to the Stanley Cup? I know us Texas folks weren't raised on hockey whatsoever, but from the sound of it, the city was just electric during the NHL playoffs.

Ohlendorf: I watched a few hockey games in college but have never paid it too much attention.  I was definitely rooting for the Penguins though and am really glad they were able to pull it out. They came to one of our games shortly after winning and brought the Stanley Cup into the locker room which was cool.

9) The team finished the month of June 15-14, the first winning June since 1996 (if I recall correctly). Despite a couple of tough stretches in May and having the lineup altered with multiple personnel changes, you guys are just 6 games out of first place and perhaps just one or two solid weeks of play from being right back in the thick of things in the NL Central during a year where it seems like all the teams are going to beat up on each other and prohibit any one club from running away with things. Do you guys still feel optimisitic about your chances to make a run later this summer?

Ohlendorf: Aside from a few rough road trips, we have played really well this season.  I don't really see anyone running away with the division, and I like our team right now.  I definitely think we still have a shot at winning the division, especially now that we have our cleanup hitter Ryan Doumit back.

10) Favorite Pirates pitcher to watch on your days off?

Ohlendorf: This is a tough call.  Charlie Morton is fun to watch because he has great stuff and Zach Duke has been dominant this year, but I think my favorite is probably Paul Maholm.  He has great composure and is able to minimize damage well when he is struggling.

11) Toughest batter for you thus far in your Big League career?

Ohlendorf: I have struggled with a decent number of big-hitting lefties. Some that stand out are Victor Martinez, Carlos Beltran, Brad Hawpe and Todd Helton.

12) Favorite city to travel to? Favorite ball park to pitch in outside of PNC Park?

Ohlendorf: Houston and Denver have been my favorite road cities this year.  San Diego is probably my favorite place to pitch outside of Pittsburgh.

13) Can you promise us here at Behind The Steel Curtain that once you've befriended Ben Roethlisberger or any other Steelers players that you'll tell them what's up on our behalf and to come by for a chat with us? :) Just kidding, Ross! Congratulations on a solid start to the season for you individually and best of luck to you and the Pirates for the remainder of the year. We'd love to do it again sometime in the future.