We continue our look at the best regular season games of Ben Roethlisberger's young career with my selection for #8...

Some thoughts and notes about the game after the jump.

Similar to what I wrote in my #10 game later in the 2006 season, this game was one that Ben Roethlisberger needed to have considering how his 2006 season started. Big Ben had not yet thrown a touchdown pass in his first three games back from his motorcycle injury and the Steelers were sitting at 1-3 and squarely behind the 8-ball one quarter of the way through the year. Ironically enough, by beating Kansas City that afternoon, the Steelers would have made it to the playoffs in 2006 had they won just one more game - like that game in Oakland where the Steelers defense limited the Raiders to fewer than 100 yards of total offense but managed to still lose thanks to four Roethlisberger interceptions. The Chiefs somehow snuck in to the #6 and final seed in the AFC Playoffs that year by finishing 9-7. Denver choked and the Chiefs snuck in the back door only to be dusted by Peyton Manning and the Colts in the opening round.

Anyway, the afternoon started out nicely for Big Ben. After a 2 yarder to Hines Ward, Roethlisberger connected with Santonio Holmes on a 50 yard bomb that eventually set up a Willie Parker touchdown run from 3 yards out. Heinz Field was rocking early and often. 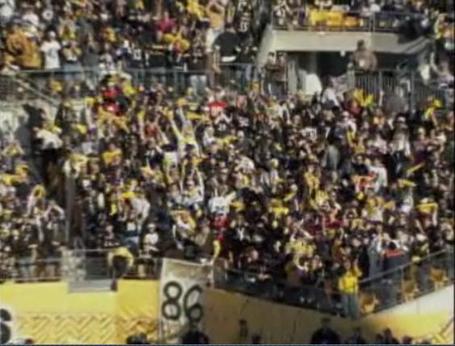 After exchanging punts (two of them from KC), Pittsburgh got the ball back at their own 42 yard line with just under two minutes to play in the 1st quarter. Ken Whisenhunt then dialed up this 1st down play after an 11 yard run from Parker to start the drive. 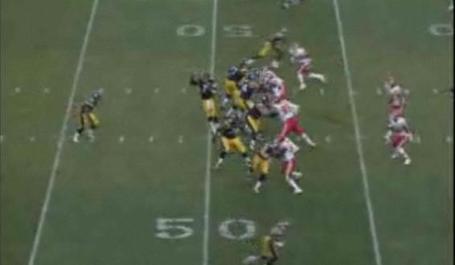 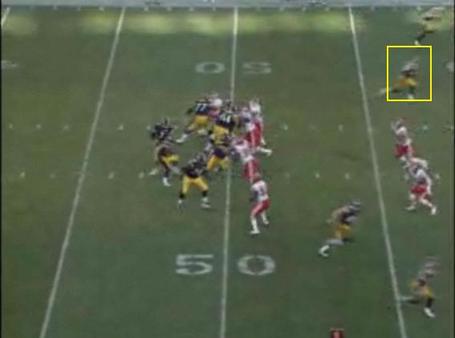 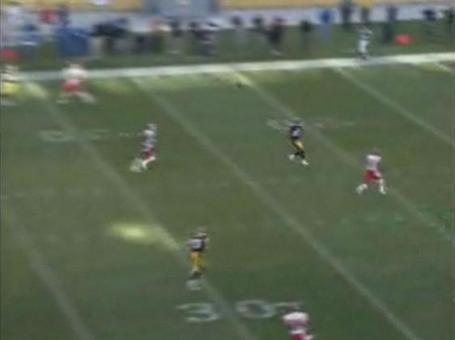 The linebacker frozen by play-action is now waaaay behind the play, with the Chiefs safety doing his best to get back in position. Big Ben unloads the ball at just the right time to find Nate Washington wide open in the seam - and before the Chiefs defender would have a chance to lay the wood..ala Ryan Clark. 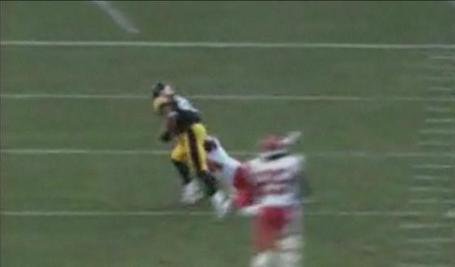 You're looking at one of four broken tackles during Washington's tenure in Pittsburgh. Washington kept his balance on the play and took it to the house for a 47-yard touchdown and a 14-0 Steelers lead.

After the Steelers defense forced an immediate 3-and-out, the Steelers leaned on Willie Parker on their next touchdown drive. The Steelers started at their own 20 but nine plays later, the Steelers took a 21-0 lead early in the 2nd quarter. Big Ben was 2-of-2 on the drive with 35 yards and both completions came on 3rd down. Willie Parker did the rest, carrying the rock six times for 51 yards and a TD.

The game then got ugly and was all but decided before halftime when Big Ben found Hines Ward for a 13-yard touchdown. The pitch and catch - which was far too easy to execute - came after a 48-yard run by Najeh Davenport. Here was the touchdown to Ward. 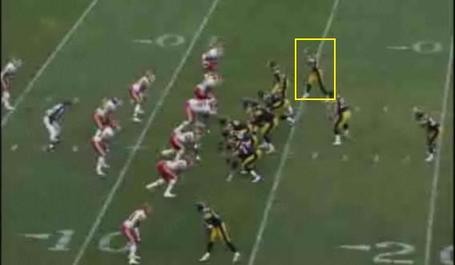 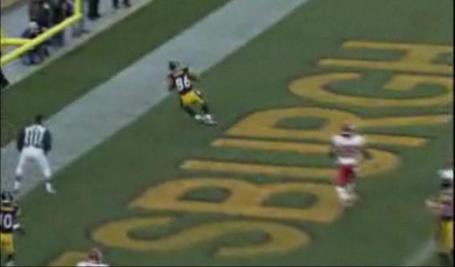 The Steelers would tack on two more touchdowns after intermission, including a 30-yard pick-six of rookie quarterback Brodie Croyle. But really this one was all but over by halftime. The lone highlight really of the 2nd half, besides the interception return, was Bill Cowher throwing the red flag with exquisite form. 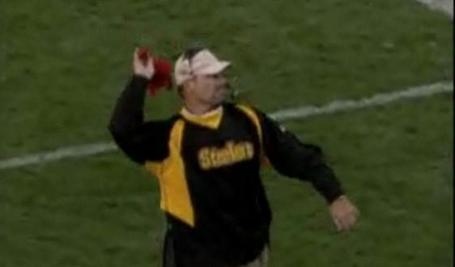 Sorry, I had to. Cowher maybe gets a little less love than he deserves as a result of Mike Tomlin's amazing start in Pittsburgh, but c'mon. It's The Chin! We love him and always will! (The challenge resulted in 7 points for Pittsburgh btw).

For the first time in the 2006 season, Ben Roethlisberger was decisive and smart with the football that week against the Chiefs. He was extremely accurate, missing on only three passes and finally looked a bit less skittish in the pocket than he had to start the season following his calamity of errors and bad luck health and injury wise.