A Closer Comparison Of Ben Roethlisberger And Eli Manning

Share All sharing options for: A Closer Comparison Of Ben Roethlisberger And Eli Manning

The following is an entry from Larry A., known better round here as WolfPackSteelersFan. For those of you who are newer to the site, you may or may not have stumbled across some of his exhaustive statistical comparison posts. His most recent entry looked at the best defenses in NFL history. You can find others along the left hand sidebar of the site's main page. WolfPack has recently started a blog of his own where he will be more frequently adding to his collection of interesting and well researched posts. Below is an excerpt of his piece, followed by a link to the rest of his entry over at his space. Be sure to check it out if you enjoy what you read. -Blitz- (Michael B.) 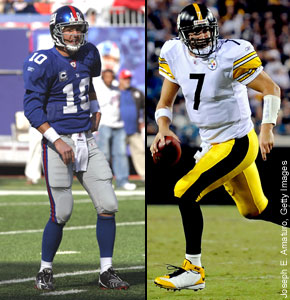 A few days ago, on ESPN.com’s AFC North blog, James Walker argued that Ben Roethlisberger is ahead of Eli Manning in every way.  Then, ESPN’s NFC East blogger, Matt Mosley, argued the opposite. After reading both arguments, I wanted to take a more in depth look at Big Ben’s accomplishments versus Eli’s. James’s arguments are based on Ben’s superior numbers in every category except sacks. Matt’s rebuttal seems to largely rest on the argument that the Steelers were loaded in 2004 while the Giants sucked and that because the NFC East is stronger than the AFC North, Eli has faced tougher defenses, on average. So, I thought it was worthwhile to test the validity of these arguments and see what else the pertinent data can tell us. All data in this post comes from www.pro-football-reference.com.

First, let’s take a quick look at the raw data. Eli Manning’s career statistics can be found here, while Ben’s can be found here. As Walker argued, the raw numbers favor Ben significantly. Since both have started 71 games and the number of games appeared in is only one more for Eli, this is about as close a comparison as can be made. So, given the same number of starts, Ben has the following statistical advantages:

So, based on raw numbers, it does appear that Ben has a considerable advantage over Eli. So, the real question is: How valid are Mosley’s arguments that the Steelers were much better than the Giants in 2004 and that the NFC East is much stronger than the AFC North? And, I will add one more: If the NFC East was stronger, what was the difference in the level of defense that each QB has faced, on average, in their career? That is to say, even if one division was stronger or weaker, division opponents only account for 6 games each year. The other 10 games, almost 2/3 of the schedule, come from outside the division.

One of Mosley’s arguments was that the Steelers have had a much stronger run game and faced, on average, an overall weaker defensive schedule than the Giants. You know, because the NFC Beast, as he calls it, is always the toughest division in the NFL. So, I pulled the data for each team during the last five years for both offensive rushing ranks and the average rank of defense that each has faced throughout the year. To be fair, I eliminated those games that Ben and Eli did not play in when considering the average rankings of opposing defenses. Here are the results:

Actually you'l have to go here to see the results and finish the post.