A new series here on Behind The Steel Curtain. With training camp still about a month away, why not dive in to one more 'list' - the top ten regular season games of Ben Roethlisberger's remarkable but still young career. My selection process was not at all scientific; nor was it based solely on statistics. One might think that Big Ben's three games with a perfect quarterback rating would sit atop my list, but that's not necessarily the case as we'll discover. The only criteria is that the Steelers won that afternoon or evening.

After the jump, let's take a look at some of the pictures from the game.

Before doing so however, let's take a step back and remember where exactly the Steelers were at that point in the 2006 season. The Steelers were 2-6 heading in to Week 10 and had lost six of their previous seven games after winning the home opener against the Miami Dolphins. Ben Roethlisberger of course, had suffered the horrible motorcycle accident during the preseason and was not yet ready to go by Week 1. Charlie Batch got the nod instead and led the team to a solid, if not overly impressive W.

Big Ben struggled mightily upon returning. In fact, it was not until Week 6 against Kansas City that he threw a touchdown pass and had been intercepted 7 times in his first three games of the 2006 season, all losses. Pittsburgh's playoff chances looked slim heading into the home contest against the upstart Saints, but they weren't done yet. The Steelers had to win that week though and Big Ben had to protect the football far better than he had the previous two weeks. He had been picked off 7 times and lost 1 fumble, to boot.

Like he's done so many times throughout his career, Ben rebounded from adversity starting that week against the Saints and almost led the Steelers back from the brink to the playoffs. Let's take a look at some of the highlights from the extremely entertaining 38-31 victory. 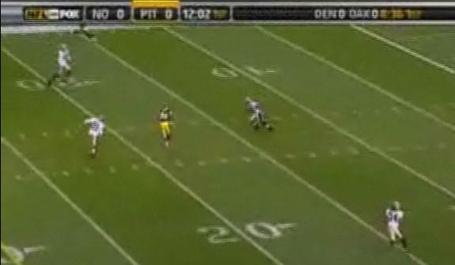 With the score tied at 0-0 early in the 1st quarter, Big Ben and Hines Ward connected for a 37-yard touchdown. The ball was perfectly thrown in the small window between the cornerback and safety for New Orleans. Ward caught the ball in full stride and had the angle on the Saints safety for the corner. 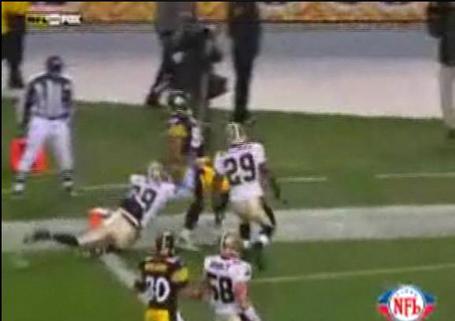 A couple of nifty moves later by Ward and the Steelers were on the board first 7-0. On the opening drive, Roethlisberger was 2-of-3 for 45 yards and a TD.

On the ensuing possession by the Saints, tight end Billy Miller coughed up the ball after making a short reception. It was recovered by James Farrior and the Steelers were in business once more at the Saints 32. The Steelers were pounding the ball with Willie Parker early and often and a 9-yard first down pass to Cedrick Wilson put Pittsburgh at the New Orleans 10 with a fresh set of downs. Two more Willie Parker runs on 1st and 2nd down put the Steelers at the 2 yard line on 3rd down. 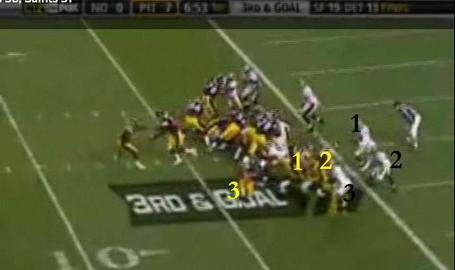 A classic example of nicely executed play action here by the Steelers, and it began with a convincing fake handoff by Big Ben. As you can see in the frame above, there are three Saints defenders for the two Steelers pass catchers and the flanking Dan Kreider. But, that requires the Saints defender with the 1 above him not to bite on the play action. He does. 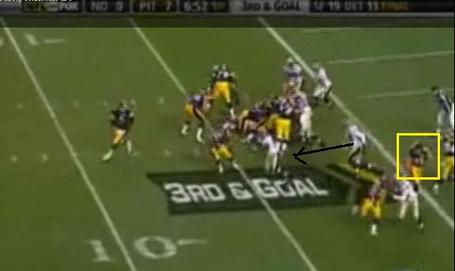 Heath Miller has kind of sneaked underneath what appears to be Hines Ward as the Saints defender has committed to attacking the backfield of the Steelers. Wrong move. 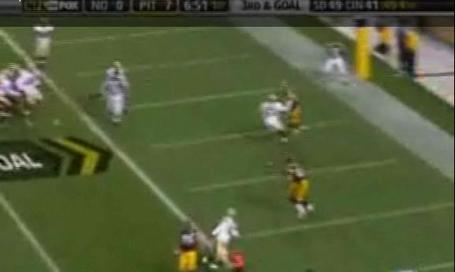 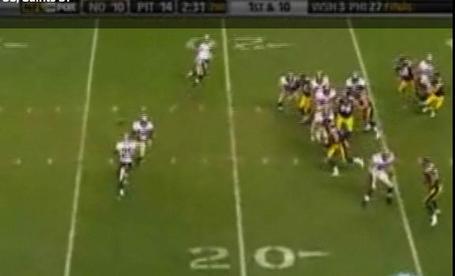 To their credit, the Saints responded, scoring the game's next 10 points. Quarterback Drew Brees was his usual sharp self. He would ultimately finish with 398 yards passing on the evening. In the frame above, the Saints are trailing 14-10 after the Steelers were forced to punt for their third consecutive possession. New Orleans is setting up a double-reverse to Reggie Bush and from the angle that most of the Steelers are taking, it looks early on in the play's development that they might have something brewing. He'll need a block first. 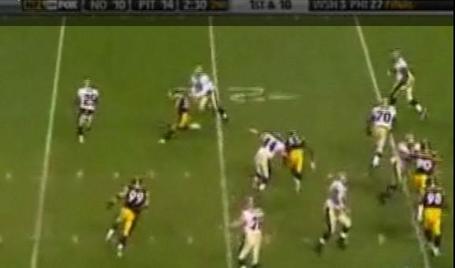 Bush gets the block from Brees and he's got the edge on the Steelers D. 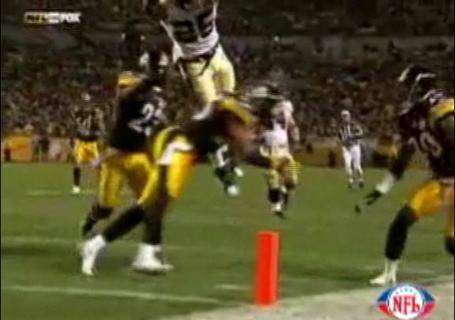 Bush took to the air from about the four or five yard line and skied over two Steelers defenders for the go-ahead score. 17-14 New Orleans.

There was actually a flurry of action following Bush's athletic touchdown run. Roethlisberger hit Santonio Holmes for a 46 yard reception that put the Steelers inside the red zone with under 2:00 minutes to go in the half. The Steelers might have been well served mixing in a run in their following three plays rather than throwing it three straight times. They had plenty of time left on the clock, not to mention multiple timeouts in their back pocket. Furthermore, why give Brees & Co. more time than necessary. Anyway, the Steelers settled for 3 to tie the game back up at 17-17.

To start the 3rd quarter, the Saints and Steelers both shot themselves in the foot and left points on the field. For New Orleans, it was a 15-yard penalty on 2nd down after breaking inside the Steelers 40 yard line. For Pittsburgh it was a missed Jeff Reed field goal from only 35 yards out. Big Ben was 4-of-7 for 56 yards including consecutive 22 yard completions that had put Pittsburgh inside the New Orleans 35.

Fumbles proved to be the Achilles Heel of New Orleans that night. Following Reed's missed FG, Reggie Bush fumbled at his own 42 yard line and Ryan Clark scooped it up and returned it five yards to the New Orleans 37. As he had been known to do, offensive coordinator Ken Whisenhunt went for the big play immediately thereafter, calling up a beautifully executed play-action bomb on 1st down. 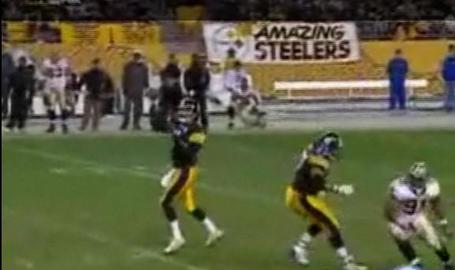 Big Ben winds up and freezes the defense with one of his patented convincing ball fakes. 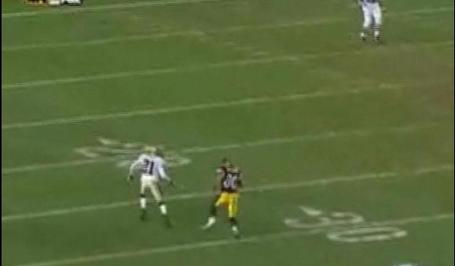 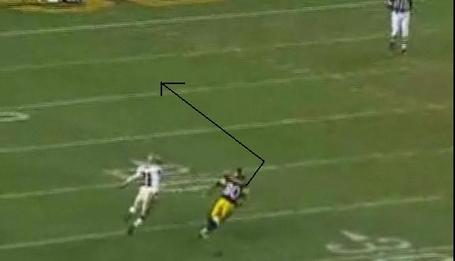 Wilson fakes to the middle as Ben winds up. Excellent footwork from Cedrick. 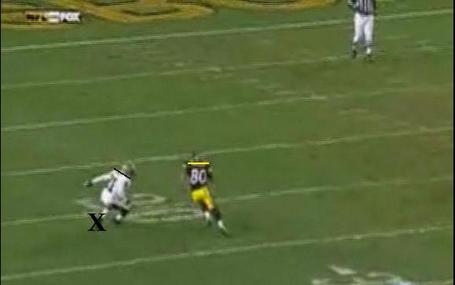 The difference in how the shoulders are squared up of these two tells you everything you need to know about what comes next. Wilson already has rounded out of his break and is heading to the endzone while the Saints defender is off balance and has his shoulders nearly parallel to the opposite sideline. Game over. 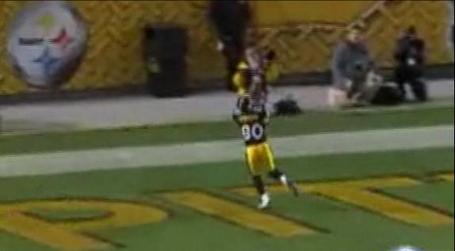 No Saints defender in sight as Wilson hauls in a perfectly thrown ball by Big Ben to the back of the end zone.

It was all Willie Parker from that point on. After New Orleans kicker John Carney missed a chip shot field goal, Parker exploded to the left for 72 yards all the way to the Saints 14. He would later score from 3 yards out to give the Steelers a 31-24 lead.

The Saints threatened on their next drive but ultimately were forced to punt. It tumbled in to the end zone for a touch back and the Steelers took back over from their own 20 up by a touchdown with just under 11 minutes to go in the game. Parker then ran 76 yards to the Saints 4 yard line after an incompletion by Big Ben on 1st down. 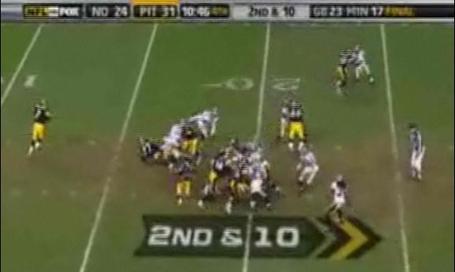 A classic FWP run. He fakes taking it up the gut before bouncing it outside. Saints defenders in the middle of the field are just slightly off balance and not in position to take a good angle to Parker. 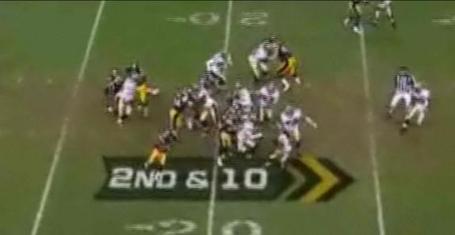 Just a half second or so has elapsed and Parker already clearly has the advantage to the edge. You can almost see the Saints defenders panicking as they realize this and begin scrambling to get outside. 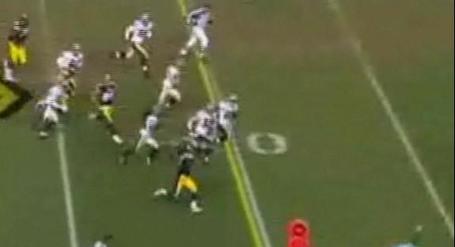 And he's off with the entire back 7 of the Saints in pursuit. Beautiful. 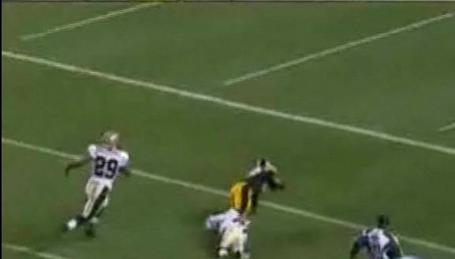 Parker was finally chased down but he would capitalize again for a 4 yard touchdown run that put the Steelers ahead by two scores. The Saints would storm back once more and actually had a chance to tie the game, but another lost fumble, the Saints third of the game, gave the Steelers the ball back with under a minute to go.

It was a tremendous football game for everybody involved - the players, coaches and the fans. Both quarterbacks were tremendous and players on both sides of the ball for both teams made play after play all game. For Steelers quarterback Ben Roethlisberger, it was his first game since beating up on the hapless Chiefs that he had played like the quarterback that had set an NFL record for success as a rookie and had led his team to a Lombardi Trophy in just his second year. There would be more struggles for Big Ben and the Steelers in the 2006 season but for a night he and his teammates were great that night. For his efforts, I'll categorize the game as the 10th best in his young but already accomplished young career.