We continue our look at the best regular season games of Ben Roethlisberger's young career with my selection for #7...

Some thoughts and notes about the huuuge 2007 division game victory after the jump.

Things certainly got off to an auspicious start for the Pittsburgh Steelers this day. The Steelers were forced to punt it away after three runs failed to gain 10 yards. The 3rd and 2 end-around to Santonio Holmes had Steelers fans screaming for Bruce Arians' head.

The Browns then took their opening drive 71 yards for a touchdown and an early 7-0 lead. The drive took 16 plays and ate up 8:55 off the clock. To that point in the year, it was the longest drive of the season for the Brownies, as well as the longest drive surrendered by Pittsburgh, at least in terms of number of plays. Browns fans - and Steelers fans too for that matter - remember how well quarterback Derek Anderson was playing in 2007 and that opening drive that he orchestrated was a great example of the strides he had been making that year. He was patient, accurate and made good reads throughout the series. Ben Roethlisberger was likely chomping at the bit for another turn.

The Steelers would get 3 points on their next drive, and Big Ben did complete his first pass of the afternoon, but it was Willie Parker's 31 yard run up the gut that set up the scoring opporutnity. Big Ben would miss on 2nd and 3rd down from the Cleveland 10 and Jeff Reed was sent in to kick a 28 yard FG. It was true and the Steelers were down 7-3.

As was the case far too often in the 2007 season, the Steelers special teams let them down following the Reed FG. Joshua Cribbs would take the ensuing kickoff all the way to the Steelers 3 before finally being dragged down by Anthony Madison. 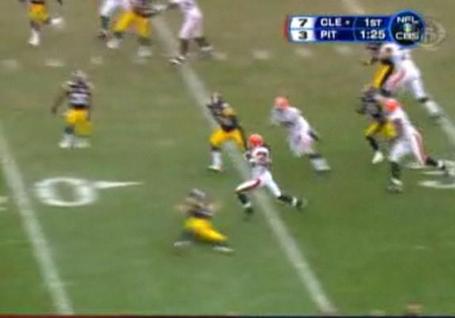 Lawrence Vickers would haul in a 2-yard pass from Derek Anderson and the Browns had a 14-3 lead just a few seconds in to the 2nd quarter.

One of the many reasons Big Ben is so good is he often responds brilliantly after the opposing team has a bit of success of their own. It's one of the main reasons he has so many late comebacks at such an early point in his career. In this instance, Roethlisberger led the offense back in to FG range before the drive stalled and Jeff Reed was sent back in to attempt another FG inside the redzone. Big Ben was 2-3 for 33 yards on the drive, with both completions resulting in a fresh set of downs. The key play of the drive though was Big Ben's 9 yard 1st down scramble on 3rd and 8 from the Cleveland 47. The gutsy run was a small foretaste of bigger things to come from the lumbering, physical quarterback.14-6 Cleveland.

Big Ben would make a critical mistake though on the Steelers next series. He had been doing a vastly better job with his decision making that year compared to in 2006, but on this play, Big Ben telegraphed where he was going with the ball. 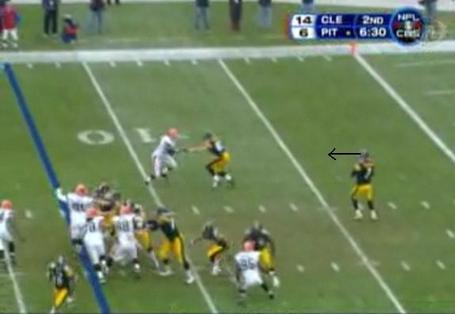 The play call was play action and though it's not clear from this frame, the play (like most play-action throws drawn up by Bruce Arians) provided two primary reads for Big Ben: one deep and another underneath. Big Ben took quickly took his eyes off the deep optioin and honed in on his underneath route, Santonio Holmes. That's fine and well, but you better get rid of the ball quickly if the safety is able to read that you're not going deep with it. Brodney Poole did just that and was able to step in front of the slightly high throw from Big Ben to make the interception deep inside Steelers territory. 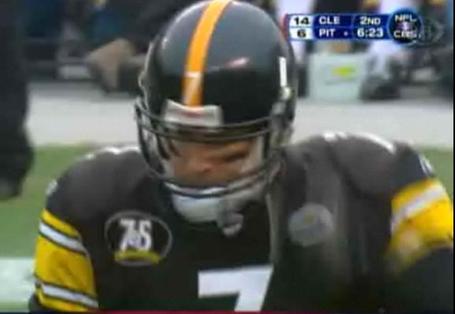 A few short plays later, Derek Anderson had his third TD pass of the 1st half, a gorgeous pitch and catch from Anderson to Braylon Edwards that initially was called incomplete before being overturn for the score. 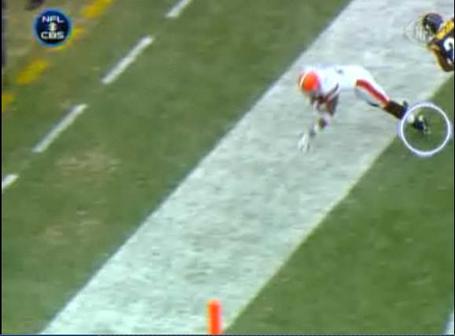 Big Ben would answer once more. After two penalties put Pittsburgh in a bind at 1st and 20 from their own 21 yard line, Roethlisberger got to work. He found Santonio Holmes for 7 yards, then Hines Ward for 12 more on 3rd and 10. After consecutive incompletions, Big Ben connected with Nate Washington on another crucial 3rd down conversion. It went for 17 yards and the Steelers were inside Cleveland territory at the 2:00 minute warning of the 1st half. An unfortunate sack on 3rd down at the Cleveland 5 yard line forced yet another Jeff Reed FG opportunity, but it was nevertheless an important series for Pittsburgh. Big Ben was 5-8 for 56 yards on the drive, yet still unable to find the endzone. For those scoring at home, that made it three trips inside the Cleveland redzone in the 1st half and only 9 points to show for it. Still, Steelers fans, myself included, were confident that the 2nd half would unfold more favorably so long as the defense would get its act together and Big Ben and the offense would not make a backbreaking mistake with the football.

The Steelers defense finally provided the offense with a big break about halfway in to the 3rd period. Shockingly, it was James Harrison who came up with the huge strip of Jamal Lewis and Ike Taylor recovered it at the Cleveland 38 yard line. After two abysmal drives to start the 2nd half, Big Ben and the offense finally got going in earnest. Hines Ward was in the middle of the momentum-shifting action like he so frequently is, catching a 1st down toss from Big Ben for 19 yards, then hauling in a 12-yarder for the TD two plays later.

Pittsburgh would then force two punts before getting the ball back early on in the 4th and final quarter. Hines Ward again got thing started with an 18 yard reception. Big Ben then converted yet another 3rd and long by finding Nate Washington for 16 yards. The Steelers were at the Cleveland 30 and fans suddenly were believing that Big Ben was going to do it yet again. Two quick incompletions dampened some of that optimism before Roethlisberger pulled off an amazing 1st down scramble that highlighted both his athletic ability and his generally solid decision making that game and that season. It also sheds light on just how ridiculously fast the NFL game is played. Let's take a look. 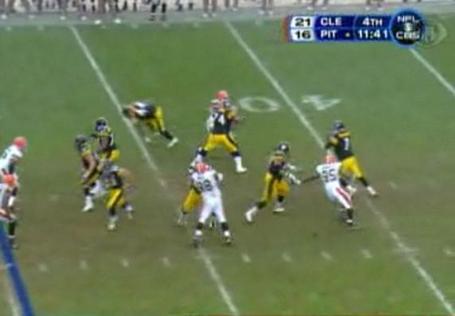 Big Ben sense pressure on his left side and steps up in to the pocket. 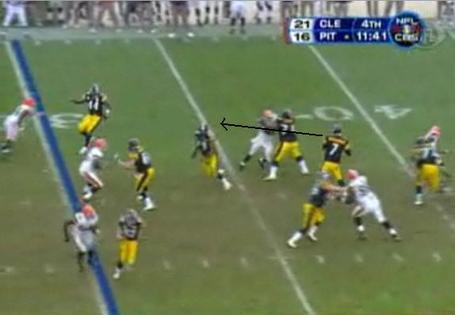 Big Ben now has a bit of a pocket to scan his options. He does so, but does so more quickly than on the play he was intercepted. 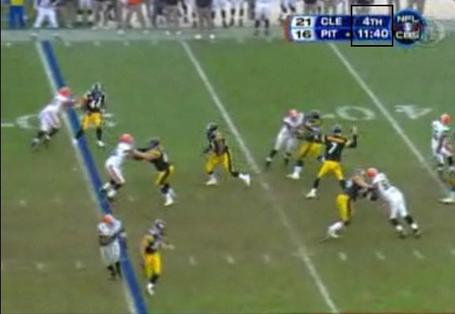 Ben thinks he has something and winds up to throw it, but ultimately decides better. Incredible that show much happens in just a split second, but we're just getting started here. Also, I boxed the game clock to reference here in a second, but notice the clock and where Ben's taking off from - roughly the Cleveland 36 or 37 yard line. 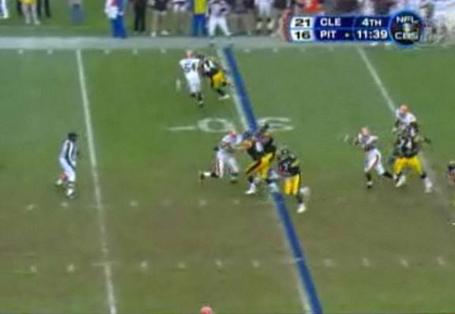 Smart choice to tuck it and run as Roethlisberger now has a huge opening to the left. His eyes had been down the field to the right, making the Cleveland secondary have to flood back left to try to pursue him. 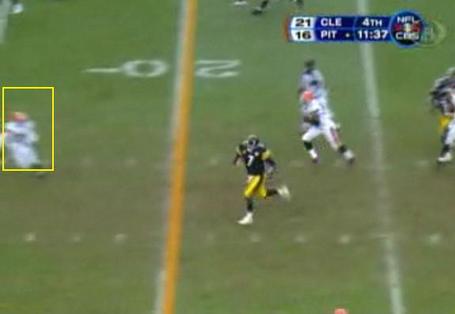 It appears that a Browns defender has an angle to Big Ben as he secures at least a fresh set of downs. You'd also think that Roethlisberger might be about to slide or at least dive. That's what quarterbacks do. Most at least. 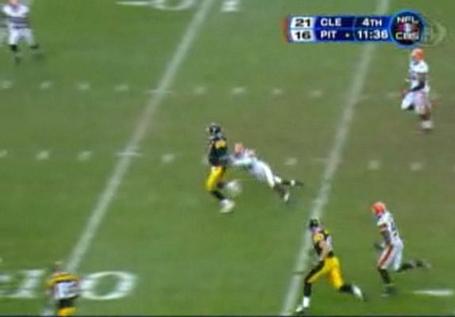 It's nearly impossible to tell from this, but that 9 yard burst there to get by the defender was really impressive. Ben was at the 22 yard line in the frame above, then at the 13 in this frame - all in 1 second's time. If you watch the film of the game, you can see Roethlisberger throwing it in to high gear there to get eliminate the angle that the defender had on him. 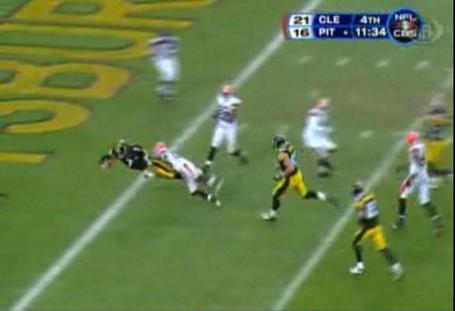 Home free. Amazing play by Roethlisberger. This play is a great example of why 40 yard dash speeds don't necessarily always tell nearly enough of the complete story about a player's abilities. Ben likely won't clock an amazing sprinting speed, but he has great football speed and an extra gear when he needs it. Tremendous stuff. One of the top plays of his entire career. A successful 2-point conversion and the Steelers have their first lead of the ball game, 24-21. Heinz Field was going bonkers. 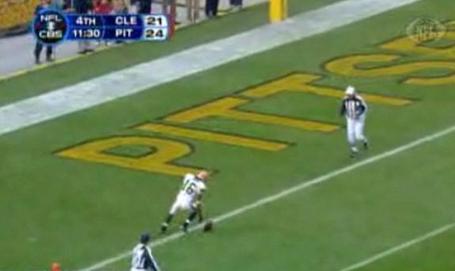 Didn't look like Cribbs would be hurting the Steelers again on this return, as he scooped up the kickoff at his own goal line with a flood of Steelers bearing down on him. 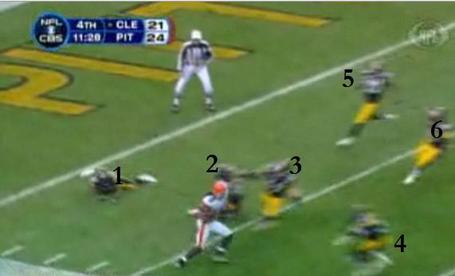 Six guys within spitting distance of Cribbs. Oh, and the sideline, the ultimate extra defender. 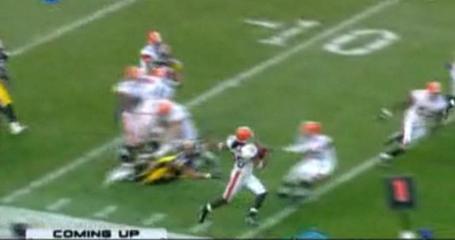 None make the play and Cribbs is suddenly off to the races. Touchdown Cleveland. 28-24 with 11 minutes still left to play.

Roethlisberger was not going to be denied however. He led the offense on an impressive 78 yard scoring drive that consumed just over 8 minutes off the clock. He was 5-5 on the drive for 65 yards and 3-3 passing on 3rd down, including a 20 yarder to Miller on 3rd and 18. Big Ben also proved once more why his skill set his so unique. Roethlisberger, facing 3rd and 9 from the Cleveland 12, demonstarted his toughness while converting yet another critical 3rd down with his legs - a scramble that ended with him lowering his head to get that last yard and a fresh set of downs. 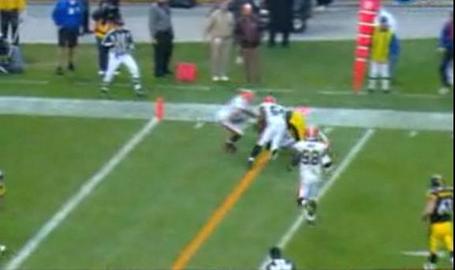 He then sealed the drive and the game with his second touchdown toss of the game, a 2-yarder to Heath Miller. The numbers weren't that flashy for Roethlisberger that day, and his 1st half interception was both an unintelligent read by him and extremely costly. As was his fumble. But he was clutch on 3rd down throughout the day, struggling really only when the offense breached the Browns 20 yard line.

But when it counted, he ultimately came through with amazing play after amazing play. Both with his legs and with his arm. Pittsburgh would improve to 7-2 and retain sole possesion of 1st place in the AFC North. That game turned out to be the difference between the playoffs and early golf for the two teams. Steelers fans can count their lucky stars that Big Ben was on their side that day, as I'm not sure any other quarterback in the league could have pulled off that particular comeback in the second half.