We continue our look back at the ten best regular season games of Ben Roethlisberger's career by going back to the second to last week of the season in 2007, Mike Tomlin's first year coaching the Pittsburgh Steelers. The Steelers were 9-5 heading in to the Thursday night road contest against the punchless Rams.  The Steelers could not clinch a playoff berth that evening, but only because they were playing on Thursday and the rest of the league would not be taking the field until the following weekend (or Monday). Nevertheless, the game was extremely important for Big Ben and the team collectively.

Firstly, it was the evening that Hall of Fame running back Marshall Faulk's number would be retired and the home crowd in St. Louis was amped up, despite their Rams sporting just a 3-11 record heading in to the contest.  Pittsburgh was also coming off consecutive losses and the surprising Cleveland Browns had tied them atop the AFC North at 9-5 heading in to that week's action. Big Ben had not thrown an intereception in two weeks, but he had also not played very well against either New England or Jacksonville - particularly in the second half of the Pats game and for most all of the Jags game before leading a late charge that proved to be too little too late. Let's see how Big Ben and the Steelers responded in what I believe was the #9 regular season game of his career.

As you likely noticed, this game was the second game in 2007 that Roethlisberger posted a perfect quarterback rating of 158.3 (the other time being against the Ravens on Monday Night Football). He got things going early and often, hitting Santonio Holmes for an 83 yard pitch and catch on the offense's first snap of the game. For those who questions Ben's ability to throw the deep ball, I'd say go back through some of the tape of his career and it's quite obvious that he's been far more successful than futile at throwing deep. 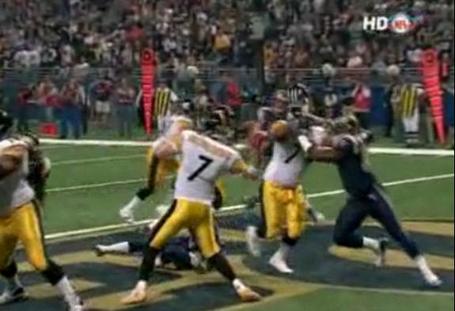 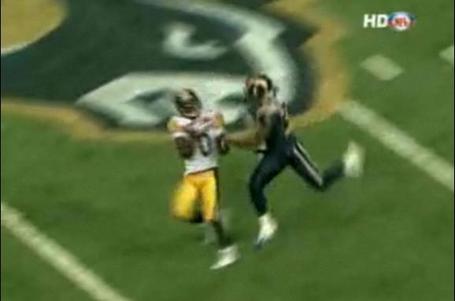 On the game's next play, Willie Parker would be lost for the season with a gruesome leg injury. Parker was leading the NFL in rushing yards heading in to that week, and considering what Najeh Dookie Davenport did that night against the hapless Rams defense, it's not unfair to assert that Parker could have won a rushing crown that year with a huge game. Anyway, seveeral short plays later, Big Ben found Nate Washington for a 17-yard touchdown on a flag pattern that was atrociously defended. A very nice throw nevertheless from Big Ben. 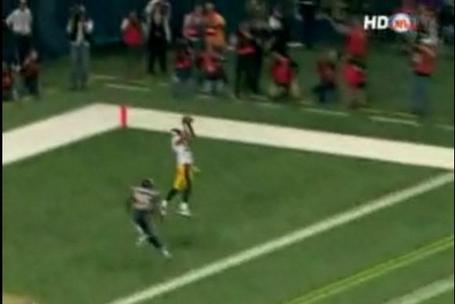 The Rams would counter with a 6 play 59 yard scoring drive of their own to level it at 7-7. Roethlisberger and the Steelers would then march all the way down to the St. Louis 4 yard line before having to settle for a Jeff Reed field goal. Big Ben was sacked twice on the drive, but he was able to convert a huge 3rd-and-18 by finding Hines Ward for 19 yards and a fresh set of downs.

Steelers fans officially got nervous when St. Louis proceeded to score another touchdown on their next drive. For the second conseucitve kickoff and for who knows how many times for the course of the entire year, Pittsburgh's special teams let them down, as the Rams took the kickoff near or past midfield once more. Four plays later and the Rams had taken a 14-10 lead early in the second quarter.

Pittsburgh then regained the lead with yet another well thrown deep ball by Big Ben. The touchdown recipeint was again Nate Washington, who shook off some hand checking at the line of scrimmage to get a step on his defender. 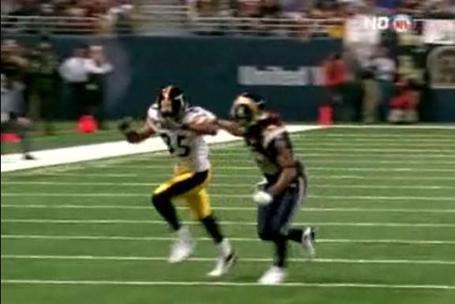 Big Ben would do the rest, dropping the ball perfectly in to Washington's arms. 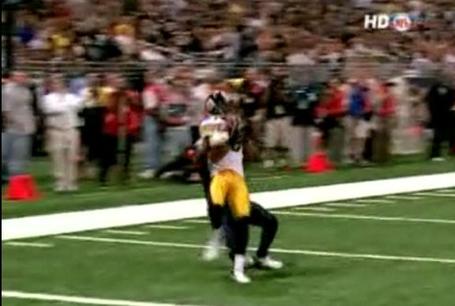 St Louis was called for pass interference on the play but no matter, touchdown Pittsburgh. 17-14. The Steelers then took command of the game before the half behind some strong running from Najeh Davenport and a fairly elementary but still impressive throw by Big Ben. Here we first see Ben getting flushed from the pocket, while Davenport begins to release from the backfield and in to his designed route. 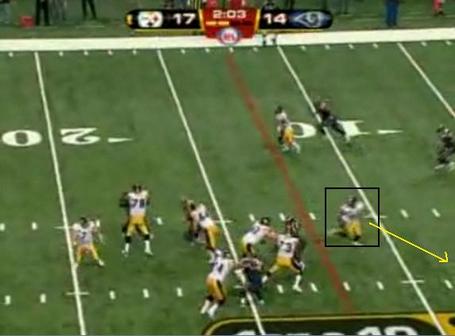 It was a well designed play by Arians that saw all of Pittsburgh's pass catchers flood to the left side, leaving only Najeh leaking out to the right side of the field. Davenport had a step on his man but it required a precise throw that would hit not-so-fleet-of-foot Najeh in stride. 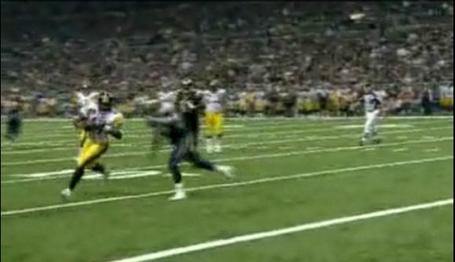 Perfect throw and Najeh was able to do the rest. 24-14 Pittsburgh.

The Steelers would then take a 14 point lead on their opening drive of the second half. Davenport again was key, but Ben was patient and precise on the series, completing all four of his pass attempts and hitting four different receivers in the process. Davenport would score from one yard out behind the lead block of Chris Kemoeatu and Pittsburgh again was up by two scores, 31-17. 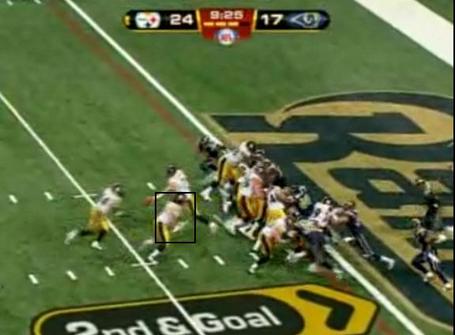 Pittsburgh iced it with a 51 yard interception return for a score by Ike Taylor. Had the Steelers defense not been so sloppy that evening, the game would likely not have been nearly as close as it was. Big Ben and the Steelers racked up 425 yards of total offense despite being sacked four times for 34 lost yards. Three Steelers had receptions of 30+ yards (Washington, Holmes, Davenport) and Big Ben was 4-of-5 for 55 yards and 1 TD on 3rd down.

As we all know, it was not quite time for Mike Tomlin's squad to in 2007 but Week 16 was an important night for Pittsburgh just to have even made the playoffs. It was also a night where Big Ben continued to demonstrate that he was more than capable of taking the big play when it was presented to him while still being careful and patient with the football at other times.

For his perfect quarterback rating in a game that ultimately proved to be a playoff clinching win, Big Ben's 16-of-20 and 3 TD performance against the Rams in 2007 goes down as the 9th best regular season game in his already very accomplished young career.