IX-Courtesy of Pittsburgh Sports and Mini Ponnies is the news that Santonio Holmes got another tattoo, but the next big thing he wants is an ESPY.  Apparently he is telling all his friends back home that he is already planning on bringing one back with him.  Santonio sure is showing a lot of confidence going into his fourth NFL season.

X-Troy Polamalu took some time out of his off-season preparation to watch his cousin, Paul, pitch for the Class A American Legion team, the Horizon Motormen.  Polamalu was gracious and kind as usual when interacting with the rest of the crowd at the game and the article also states that Polamalu was no slouch as a baseball player himself, playing throughout high school as a center fielder and lead-off hitter. 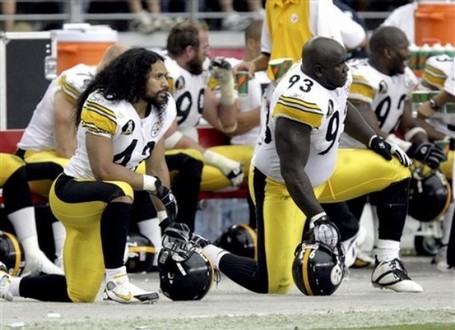 XIII-Nick Eason has been playing football in the NFL for five seasons and now finally has a Super Bowl ring to show for his hard work with the Pittsburgh Steelers.  Eason has had a roller coaster ride on his journey to the NFL after being considered a first day draft pick, he slid all the way to the fourth round with the Broncos, while ESPN's camera's covered his draft day fall.  After landing on the Broncos he spent his first season on I.R., and then was sent to NFL Europe after disappointing in his second season.  Hopefully Eason's play will improve this season, as he was the youngest defensive linemen on the roster last season and the Steelers can use his youth.

XIV-If anyone lives in or around the Harrisburg, Pennsylvania, get your car running and get to the Capitol building before 2pm today as the Steelers, Penguins, and Philadelphia Phillies world championship trophies will be on display in the east wing rotunda of the Capital Building.  That would be damn cool to get a picture with those.  Mondesi's House has pictures of the three sitting together on display.

XL-I usually shy aware from turning the six-pack into an advertisement, but Steelers news is few and far between these days.  Jostens' who created the Steelers official Super Bowl bling, have created some "fan priced" memorabilia.  If you're are looking to get a Super Bowl ring, this might be as close as you get.  A lot of the stuff looks kinda of cheesy to me, but hey, worth a look.

XLIII-In case you missed it on July 4th, Joey Chestnut took home the Nathan's Hot Dog eating championship for the third consecutive year, beating his rival Takeru Kobayashi and breaking the former world record of 59 hot dogs in 12 minutes, by eating 68 hot dogs in 10 minutes.  Tiger vs. Phil, Federer vs. Nadal, and Chestnut vs. Kobayashi, we live in an amazing time for sports rivals.