The 12 Most Heartbreaking Playoff Losses In Pittsburgh Steelers History: #3

Share All sharing options for: The 12 Most Heartbreaking Playoff Losses In Pittsburgh Steelers History: #3

We are down to Number 3.  This one not only hurt real bad, the bone-chilling weather made the hurt sting even more...

If someone would tell you late in August that your beloved football team would go 15-1, take a 14-game winning streak into the playoffs, host the AFC Championship Game against a team that you soundly defeated earlier in the season, with an NFC team waiting at the Super Bowl that you dismantled earlier in the season, you would quickly ask two questions.  First, where do I sign?  And second, what do I have to give the devil?  That was the scenario in 2004. 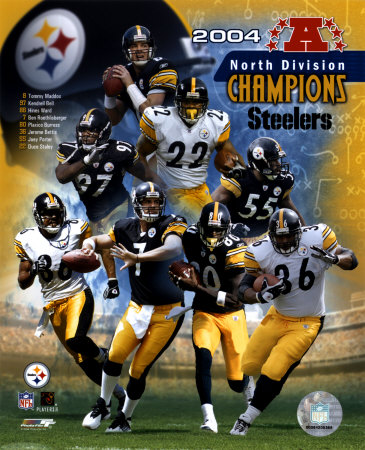 This AFC Championship Game, played at home, was especially painful since there is no question in my mind that the Steelers could have whooped Philadelphia in the Super Bowl.  In fact, we had already beaten New England and Philly in back-to-back weeks during the regular season making this loss hard to swallow.  It was also painful physically.  The temperature of 11 degrees was the coldest playoff game in Pittsburgh history and one of the coldest Steelers' games ever, period.  With the wind-chill, it was somewhere in the minus category.

For the first time all season, our rookie quarterback looked like a rookie quarterback.  The clock struck midnight for Ben Roethlisberger, who previously had been brilliant, albeit in a limited system.  Roethlisberger's first pass of the game was picked off by Eugene Wilson, putting the Steelers in the hole, 3-0.  The Steelers drove to the New England 39-yard line on their next possession, but Jerome Bettis' fumble was recovered by ex-Steeler Mike Vrabel.  On the very next play, Patriots' quarterback Tom Brady hit Deion Branch with a 60-yard touchdown strike.  After a Jeff Reed field goal, the Patriots scored again on Tom Brady's second touchdown pass, this time to David Givens.  Trailing 17-3, Pittsburgh drove down the field and looked ready to score when Roethlisberger was intercepted by Rodney Harrison, who bolted 87 yards for a touchdown.  At half the score was 24-3.  Three horrific first-half turnovers took all the air, cold as it was, completely out of the stadium. 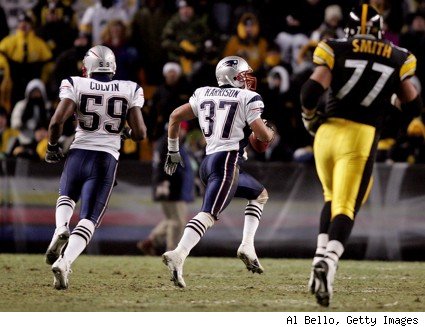 The Steelers came to life in the second half, with third-quarter touchdowns from Jerome Bettis (five-yard run) and Hines Ward (30-yard reception), even though sandwiched around a Corey Dillon 25-yard touchdown run for New England.  The Steelers drove again and found themselves on New England's three-yard line early in the fourth quarter.  Trailing by two touchdowns, might have cut the lead in half, but Bill Cowher elected to kick a field goal.  I felt our only hope to win the game vanished at that point since the Steelers still needed two touchdowns, even after the field goal.  You could sense a stream of electricity leaving the crowd.  The Patriots felt relieved to only give up three points and responded with 10 unanswered points to put the game away.  Pittsburgh not getting into the end zone with virtually a whole quarter to play, for all intents and purposes, was the end. 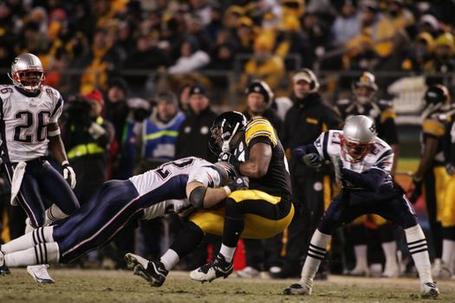 A last-gasp seven-yard touchdown pass from Roethlisberger to Plaxico Burress made the score, 41-27, look closer than it could have looked.  So and the Philadelphia Eagles met in the Super Bowl.  Within eight days earlier in the season, beat the Patriots 34-20 and demolished the Eagles 27-3.  The Lombardi Trophy was ours for the taking, but it was New England that did the taking.  The way the Eagles looked in that Super Bowl, and remembering that contract back in August, this game was the third worst playoff defeat in Pittsburgh Steelers' history. 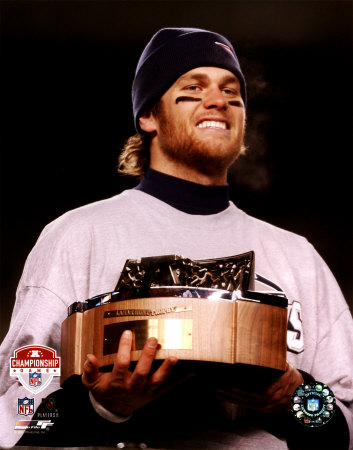 How painful is this shot???

As an afterthought, and this doesn't help matters at all, a few years later Pennsylvania Senator Arlen Specter met with NFL Commissioner Roger Goodell about the antitrust issue. During the meeting, Specter learned that the Patriots had been videotaping opponents since 2000.  In a post-meeting press conference, Specter said that "there were notes showing that the Steelers' games had been taped," specifically, two contests during the 2004 season:  one on October 31, and the other, the AFC Championship, on January  27.  As mentioned, Pittsburgh clobbered the Patriots in the first meeting, 34-20, sacking Tom Brady four times and picking him off twice.  Three months later, unsurprisingly (in hindsight), the Patriots won 41-27, and Brady, sacked just twice in the rematch, finished 14 of 21 for 207 yards with two touchdowns and no interceptions. Did New England gain an advantage from having videotaped Pittsburgh during that first 2004 meeting?   According to Specter, "There isn't enough evidence to say that, yes, unequivocally the Patriots won because they had the Steelers' defensive signals; but it would also be naïve to suggest that having access to that information had no bearing on the outcome."