The 12 Most Heartbreaking Playoff Losses In Pittsburgh Steelers History: #2

Share All sharing options for: The 12 Most Heartbreaking Playoff Losses In Pittsburgh Steelers History: #2

Here we are with the runner-up...Again, we'll have a Great Eight Heartbreak Tournament and Steeler Nation will determine the final runner-up, but you need to read the write-ups and follow-up discussions to be fully informed to cast your votes...Anyhow, my Number Two Heartbreaker is...

Because this game was the Super Bowl, the only one of seven that the Pittsburgh Steelers lost, by default it could be construed as the biggest heartbreaker in Steelers' history.  It is not my most painful, but indeed runner-up, and not simply because it was the Super Bowl.  Other factors made this loss extremely painful.

The Dallas Cowboys were coached by Barry Switzer, who was way over his head in the NFL.  Switzer was a successful college coach at Oklahoma, where running the wishbone offense with far-superior talent was within his ability range.  He took the Cowboys' job only because his college roommate, Jerry Jones, owned the team and offered it to him.  It was like Richard Pryor coaching the Cubs.  Switzer took the boatloads of talent that previous coach Jimmy Johnson left him and annually regressed the franchise into a losing team.  After Johnson's talent beat the Steelers in that 1996 Super Bowl (1995 season) with a 12-4 record, Switzer managed to go 10-6 in 1996 and then 6-10 in 1997 before scurrying out of Dallas.  His replacement, Steelers' offensive coordinator Chan Garley, brought the team back to 10-6 in 1998.  Losing a Super Bowl to Barry Switzer alone is enough to buy stock in Maalox, but I digress.

The Cowboys were 12-poing favorites, but I really believed Switzer negated that advantage and the game was even.  My inclinations turned out to be fairly accurate.  The Steelers were not outplayed nor certainly outcoached in this Super Bowl.  What hurt the Steelers early in the game is the fact that they were obviously an anxious team, unlike Dallas who had been to the Super Bowl twice in the previous three years.  The Pittsburgh Steelers looked like the stage had gotten the better of them.  Dallas claimed the game's first three scores and methodically nursed a 13-0 lead before the Steelers gained any confidence or momentum.  With just 13 seconds left in the half, Neil O'Donnell hit Yancy Thigpen with a six-yard touchdown pass.  Trailing 13-7 at the break, the Steelers went in the locker room knowing they could play with this team. 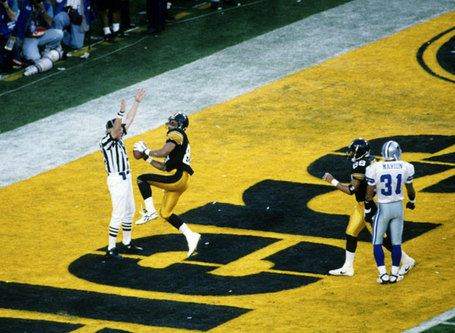 The Steelers took that last-minute second-quarter touchdown and easily equaled or outplayed Dallas in the third quarter.  It even looked like Pittsburgh might take the lead, when Dagger One came right through the heart.  O'Donnell's pass, he claimed afterward, slipped out of his hands and went right into the arms of Dallas cornerback Larry Brown.  With no one near him, Brown took the interception all the way from the Dallas 38 to the Pittsburgh 18.  After a Troy Aikman to Michael Irvin completion, Emmitt Smith banged in from the one.

The Steelers would not quit, maybe because they felt the same way their fans felt:  "This team is not better than us."  In the fourth quarter, Norm Johnson kicked a 46-yard field goal and then executed a beautiful onside kick. Pittsburgh recovered and soon found its way into the end zone on a Bam Morris one-yard plunge.  The defense forced Dallas to punt, and with 4:15 to play, the Steelers had the ball on their 32-yard line, trailing just 20-17.  Confidence and hope were sky-high. 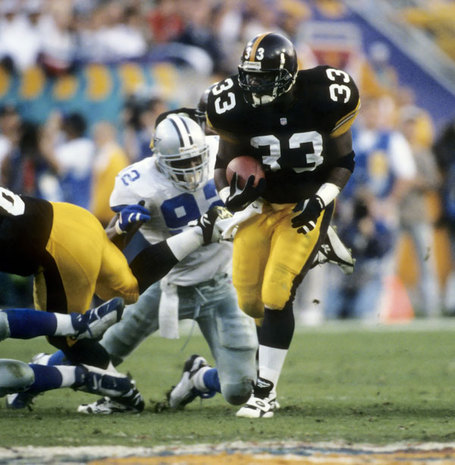 Two plays later the game was over.  Dagger Two.  Deja vu was never, ever so painful.  Attempting to hit Andre Hastings, O'Donnell and Hastings both read a Cowboy blitz.  The problem was, Hastings thought he should break off his route to counter the blitz, and O'Donnell thought Hastings was going to continue to the outside.  O'Donnell threw the pass to a wide-open Larry Brown, who this time took the interception from the Pittsburgh 39 all the way down to the six.  Emmett Smith scored on another short run, but at that point the 27-17 outcome in no way depicted how close Pittsburgh came to winning the Super Bowl. 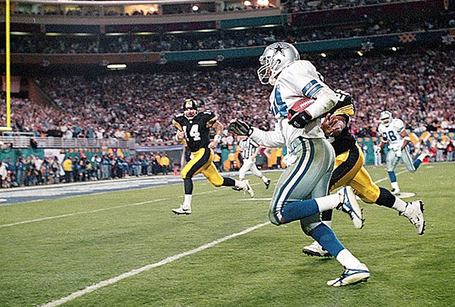 Despite the sloppy beginning and despite the two insurmountable daggers into the arms of Super Bowl MVP Larry Brown, the Steelers, 12-poing underdogs, played toe-to-toe with Jimmy Johnson's future Hall of Fame players.  Emmitt Smith was held to just 49 yards on 18 carries and Troy Aikman was a respectably efficient 15 for 23 for 209 yards.  The Steelers compiled more total yards, more passing yards, more rushing yards and ran 84 plays to Dallas's 50.  Pittsburgh had 25 first downs to 15 for the Cowboys and converted nine of 19 third downs to just two of 10 for Dallas.  The Steelers also outplayed Dallas on the defensive side of the ball, except for two plays.  If that is not heartbreaking, in the Super Bowl no less, than I don't know what is.  As a final footnote, Neil O'Donnell's final pass in the game was his third interception.  He had seven all season long.  He would never wear a black and gold uniform again.