I find myself swamped so let's turn it over to Neal to give us a little preview of tonight's preseason game between the Steelers and the Cardinals. Can you believe it? Football's back! - Blitz - (Michael B.)

Do preseason games matter? No. Are fans not anxiously awaiting kickoff for the Super Bowl XLIII Rematch Lite Thursday night in Pittsburgh? You bet.

Lots of storylines going into the game for both teams. Here's but a few for the Cardinals:

Here's the other news surrounding the Steelers and Cardinals heading in to Preseason Week No, 1:

"I set my goal. I said wanted to be the best defensive lineman on Super Bowl day and I was." – Darnell Dockett

We last saw Dockett taking RG Darnell Stapleton and C Justin Hartwig to school in Super Bowl XLIII. The fact his off-season request for a contract extension was denied after playing the game of his career in the game of the franchise’s history can be translated into a quiet shot at the generally perceived weak links of the Steelers offensive line.

Either way, Dockett’s two sacks and general disruption led to a dangerous lack of production in the second half of the Super Bowl. It really was only until the Steelers went out of the shotgun and the Cardinals played out of the nickel. Both will be on display in the preseason opener Thursday evening in Pittsburgh. 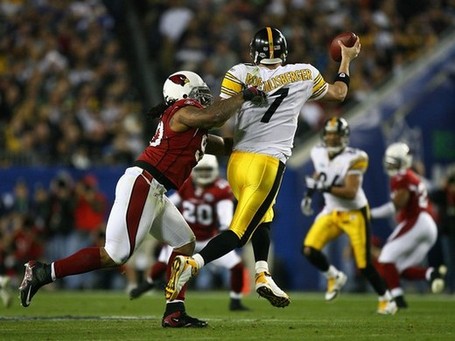 Speaking of that…Dockett’s responsibilities out of the nickel aren’t the same as what he has out of their base 4-3, and the team flat-out does not perform with the extra defensive back on the field. The reason Tarvaris Jackson is still in the running to be a starting quarterback in the NFL is because of Arizona’s nickel defense (11-for-17, 163 yards, four touchdowns). Dominique Rodgers-Cromartie was the team’s nickel back, and one of the most under-reported aspects of the Super Bowl was his responsibility behind much of Santonio Holmes’ 131 yards and Super Bowl MVP.

Don’t take the touchdown catch away from him. That’s all about ‘Tone and the most beautiful pass Ben Roethlisberger has ever thrown.

The Cardinals are at their best out of their base, and Dockett is a big reason for that. While he Tweets  away despite the absence of a long-term contract, and even though this is a pre-season game, it’s a good early test (at least for a couple of plays) for the interior of the Steelers line. Focus on Dockett, and how much attention he receives.

Cardinals Coach Ken Whisenhunt: "I just feel very good that we have a lot more depth at (the cornerback) position in general, not just because of 'B-Mac’ (Bryant McFadden) and Dominique (Rodgers-Cromartie), but the other guys, too. That's not something we've had in the past."

Wallace, the team’s third-round draft pick out of Mississippi, has drawn rave reviews during training camp thus far. It’s said that he’s competing for the No. 4 WR spot with veteran Shaun McDonald and second-year man Limas Sweed (with one taking the No. 3). Wallace is a compelling speed demon on the outside, and while he doesn’t possess the veteran savvy of McDonald or the fantastic size/speed combination of Sweed, he is a playmaker in every sense of the term.

McFadden signed a 2-year, $10 million contract to leave Pittsburgh for Arizona. Arizona coach Ken Whisenhunt praises McFadden for his leadership ability and mental toughness. He will provide some depth on a pass defense that finished 22nd last season against the pass.

"It's just another game. The Super Bowl's gone. We won it. We don't care about the rematch."
-CB Deshea Townsend

Not through any efforts to suck the marrow out of the re-match story, clearly, the pre-season opener is not the same as a Super Bowl.

It is a good opportunity to watch the game again, though.

Putting a more objective hat on during the re-watching of one of the best Super Bowls of all-time, what struck me is how razor-sharp Cardinals QB Kurt Warner really was. Yes, Larry Fitzgerald had a profound impact on the result, but Warner was the engine driving their comeback machine in the fourth quarter.

The Steelers were utterly dominant on their first possession of the game, and despite a very close overturn of a touchdown, they looked to be very much in charge early.

Even more credit to Warner, it almost seemed as if he was forced to drag his team, kicking and screaming, back into contention.

No one will ever forget the last time these two played, and no one should. It was truly a classic, and even if Thursday’s game means very little to two veteran-laden teams who prepare in the pre-season to establish depth more than anything, it envokes great memories for fans of both teams.

I see you, Ziggy Hood, for the excellent start to your career. Drafted in the first round out of Missouri, Evander-Ziggy has been noted for his work ethic after practice, in particular, working with veteran super-stud Aaron Smith after practice.

Four-time Pro Bowl nose tackle Casey Hampton, as outspoken as he is, mentioned how much talent Hood has, and could be playing himself into a situational role his rookie year – not something particularly common for a Steelers rookie.

Unnamed sources breathed their praise of Hood to Steel City Insider’s Jim Wexell early in camp, and plenty of eyes will be on him as he takes on a second-team defensive end position in the first preseason game. 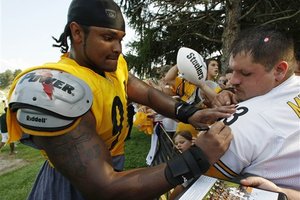 The East Valley Tribune is holding a forum for Cardinals fans to express their memories of Super Bowl XLIII – they’re classy and gracious, unlike certain fans of another NFC West Super Bowl Runner-up.

The Cardinals official forum voted on the battle between Matt Leinart and former Steelers QB Brian St. Pierre as the match-up they’re most excited to watch Thursday.

Coach Whisenhunt says WR Jerheme Urban is having as good a camp as anyone.

Kent Somers of the Arizona Republic blogs about the impact rookie Beanie Wells may have in comparison to incumbent running back Tim Hightower.

Revenge of the Birds couldn't decide on just Ten Things To Watch For Tonight so they did another ten.

Steelers coach Mike Tomlin is 7-2 in the preseason, and 2-0 in openers.

C Justin Hartwig is injured, and Doug Legursky will get the nod at the first-team center job. That will give more reps to local favorite A.Q. Shipley, and perhaps a chance for newly signed Alex Stepanovich to prove his worth.

Chuck Finder of the Post-Gazette reported that actor Ving Rhames was on hand to watch some of the Steelers practices Tuesday.   Nice…ya think they referred to him as Diamond Dog from Con Air? There’s a great Awful Movie – Nicholas Cage as an action hero with a southern accent.