40 Years Ago Today in Steelers History: Rocky Bleier Fights Back

Share All sharing options for: 40 Years Ago Today in Steelers History: Rocky Bleier Fights Back

BTSC is grateful to Steelers legend Rocky Bleier, who gave us an hour of his time to recall the worst day of his life, exactly 40 years ago today.  Thanks also to Dick Hoak, Bleier's position coach, for chipping in as well.  Bleier is a very humble man.  Many of his words did not come easy.  But the truth is, the Rocky Bleier story is a classic example of human will and perseverance.  On the 40th anniversary of his fateful day, let's raise up our glasses to a member of our proud past, Rocky Bleier.  For those who would like to read a great book, Rocky teamed up with Terry O'Neill to write "Fighting Back," a great education in Steelers history and human achievement. 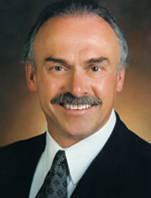 August 20, 1969.  Robert Patrick Bleier, a member of the U.S. Army's 196th Light Infantry Brigade, was not thinking about the days when he was the captain of the Notre Dame football team.  He was not reminiscing about the epic 1966 battle at Michigan State when he led the Irish in rushing in a 10-10 stalemate that sealed the national championship for Notre Dame.  He was not remembering that January day in 1968 when he was drafted in the 16th round by the Pittsburgh Steelers.  Bleier, stationed in Hiep Douc in South Vietnam, had more pressing matters at hand.  Bleier's C Company had been beckoned to rescue B Company after an ambush by the North Vietnamese Army.  The fighting escalated and Bleier found himself in trouble.

"About a hundred meters ahead of us we could see the leaves rustling," recalled Bleier.  "We knew there would be gunfire and grenades.  One of my platoon mates kept yelling, ‘Rock, Rock.'  Then I felt a sharp thud in my leg.  I thought my buddy threw a rock at me to get my attention.  When I looked at my leg it wasn't a rock.  A bullet went right through my thigh.  It didn't hit bone, but created both an entry and exit wound."

His day would get worse.  A live grenade landed close to him and before he could jump out of harm's way, it exploded and riddled his right foot with shrapnel, rendering him immobile.  Every member of Bleier's company was either killed or wounded.

"I had a wrap on my leg and we had just lost three or four men," remembered Bleier.  "A grenade bounced off Captain Murphy and landed right next to me.  I couldn't get out of the way in time."

A third platoon was sent to help, but time and distance seemed like eternity.  Bleier crawled through rice paddies, was dragged and was carried in a poncho.  All the while, he was losing blood and his foot was burning from the sulphur laced into the shrapnel.  When Bleier became too heavy to carry, his fellow soldiers decided to set Bleier down and get to a helicopter with hopes of bringing back a board that would make the job of transporting him possible.

"A few minutes later, I saw a black hand reach down to pick me up," said Bleier.  "This man put me over his shoulder and carried me the rest of the way to the helicopter.  Racism was never more turbulent than back in the 60s, but in those rice paddies, we were colorblind.  We were Americans.  I never found out his name.  I thought for sure someone would come forward, but to this day no one ever did."

Not a moment too soon, Bleier finally reached the helicopter that took him to a medical camp.  His first shot of morphine was administered 14 hours after the initial bullet wound.  Flown off to Tokyo, Bleier was treated by Dr. Andy Laorr and Dr. John Baughman. They performed surgery on Bleier, removing more than 100 pieces of shrapnel from his foot.  Safe from the enemy at the moment, Bleier thought about football again and asked his doctors about its future.  Playing football, Dr. Baughman informed, "was going to be impossible."  Walking again with some degree of normalcy was a more plausible goal.

"Dr. Laorr was more diplomatic, but he too told me to forget about playing football," noted Bleier.  "He said he was sorry, but there was too much damage to my right foot.  Ironically, Dr. Laorr  (from Thailand) later set up practice in Indiana, Pennsylvania and saw me play a lot of football."

Three weeks later, Bleier was flown to Fort Riley, Kansas to begin recovery.  Accompanying him back to the States was a Purple Heart for being wounded in action and Bronze Star for heroic or meritorious achievement.  In January, 1970, Bleier underwent a second surgery to remove bone spurs and cut ligament out of scar tissue.  He was rendered 40 percent disabled by the U.S. Army.

What followed is a lesson in human determination that is difficult to fathom.  Bleier took shock therapy treatments.  He stretched with large rubber bands.  He ran before dawn, lifted weights and ran sprints every day.  On weekends, he ran the steps of the Kansas State University stadium with 10-pound weights on his ankles.  He ate every vitamin known to mankind and supplements like wheat germ and calf's liver.

"I just wanted to play football more than anything else in the world," recalled Bleier.  "I was a bachelor.  Football was my life and my dream at the time.  Nothing else mattered.  I loved the game so much.  I didn't want to look back later in life and regret not giving the game every ounce I had." 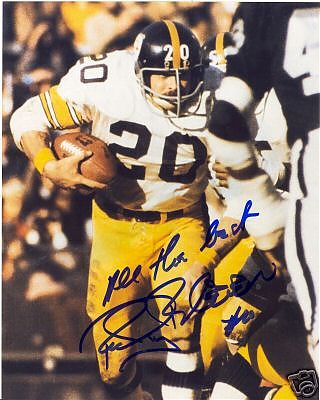 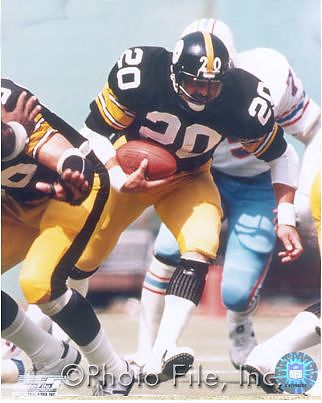 He reported to Steelers camp in the summer of 1970, less than one year after his right foot was nearly destroyed.  Chuck Noll was graceful, but he had a professional football team to run.  He decided to put Bleier on waivers.  The Rocky Bleier story would likely have ended at this point, except for one simple stroke of luck.  Bleier was drafted by the Pittsburgh Steelers, who were owned by a gentleman named Arthur J. Rooney.  When it came to being a humanitarian, time and time again, Art Rooney stood on higher ground.  He changed Chuck Noll's waiver orders and placed Bleier on Injured Reserve.

This unnecessary act of kindness cost Mr. Rooney $20,000, which was Bleier's salary.  It allowed Bleier to concentrate on rehab instead of worrying about gainful employment.  Rooney also reached into his pocket to pay for a third operation.  Bleier's medical bills were the responsibility of the U.S. Government, but Rooney wanted the Steelers team doctor to perform the surgery.  More shrapnel was removed and scar tissue was ripped apart to promote flexibility.  With the outlook of playing professional football still looking bleak, Rooney allowed Bleier to work in the scouting department to give him a head start on an alternate career, if needed.  It was Rooney being Rooney, on a level unto himself.

In 1971, Bleier continued his rigorous training regimen.  He never missed a workout.  He felt victorious simply walking around without a limp.  When training camp opened he pulled a hamstring.  He did have one thing going for him.  Nobody in the NFL could possibly imagine Bleier playing football.  He was a 16th round pick before the injury.  The Steelers put him on waivers and because no one claimed him, he was able to be placed on the team's taxi squad.  This bought him another year.  What should continue to not go unnoticed is the Rooney family's generosity.

Bleier came into camp in 1972 and to the astonishment of Chuck Noll and the entire organization, ran a 4.6 forty-yard dash.  His best time before that was 4.8.  His right foot was shorter than his left, deformed from injury, yet he cut two-tenths of a second off his best forty time.  If Noah Webster had been around Latrobe in 1972, he might have changed the definition of the word "inspiration."  Bleier's new-found speed elevated the entire organization.  He made the regular squad this time and became a special teams demon.  He returned a few punts and kickoffs.  More impactfully, he was on the coverage teams and used sheer desire to help the team significantly.

During the 1973 offseason, to complement his new-found speed, Bleier hit the weight room three hours a day for six days a week.  By the time camp opened, he was bench-pressing 440 pounds.  Special teams was his main focus.  You would be hard-pressed to find a better special teams player in the NFL. 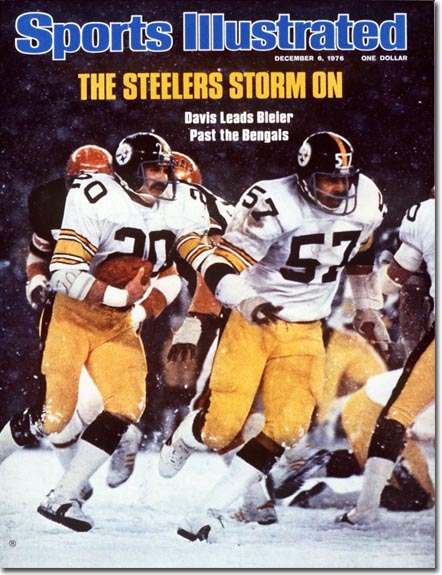 In 1974, Rocky Bleier came of age.  He started in the backfield alongside Franco Harris.  His added muscle and desire to be the best football player he could possibly be, made him an exceptional blocking back.  The Steelers played in the Super Bowl that season.  Bleier not only started, he was sitting in the team meeting when Coach Noll diagrammed the Steelers first offensive play.  Bleier would carry the ball off tackle, and do so wearing two different shoe sizes, a 10 and-a-half on his left foot and a size 10 on his right foot, permanently shortened by a grenade. The sensation that ran through his body was overwhelming, thinking back to that fateful day in August of 1969.  Later in that Super Bowl, Bleier busted off an 18-yard gallop to sustain a key drive, one more yard than the Vikings would rush for the entire game.

Rocky Bleier didn't become a champion in 1974.  He already was one.  He would later rush for 1,000 yards in the 1976 season and finish his career with almost 4,000 rushing yards and four Super Bowl rings.  He caught a crucial touchdown pass in Super Bowl XIII against the Dallas Cowboys to put the Steelers ahead to stay.  His blocking and pass-catching contributions went unsung by most, but not by anyone in the Steelers organization.  Dick Hoak, Steelers running backs coach from 1972 through 2006, saw the Rocky Bleier story unfold before his eyes. 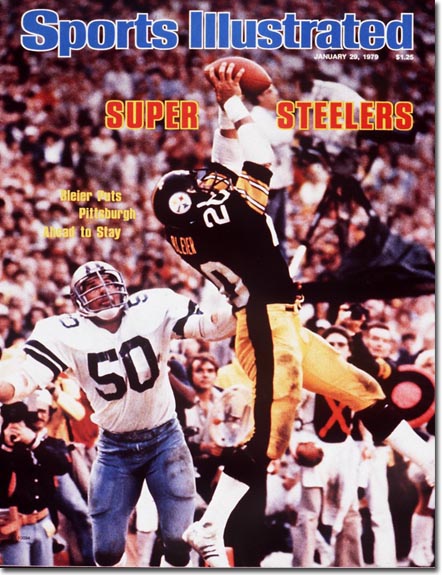 "Rocky worked so hard," remembered Hoak.  "He was quite an inspiration.  He did something unheard of - he actually improved his speed significantly.  That's how hard he worked.  He was the ultimate team player. He was a great blocker and as smart a back as I've ever seen.  He could play both fullback and halfback.  They were two completely different positions back then.  Today you see teams with two feature backs, but they are asked to do the same thing in alternating fashion.  In the 70s, the fullback and halfback had different assignments on every play.  Rocky knew everything and played both.  With Rocky, you told him something once, that was all.  I loved coaching him."

There are examples throughout history when the human will transcends probability to a level that is difficult to comprehend.  Let us not forget, on this the anniversary of the darkest day of a young man's life, that our own Rocky Bleier was one of those examples.  Doctors may have known exactly what was inside his foot, but they could never see what was inside his soul.

On the Silver Anniversary of that fateful day in 1969, I was married to a woman named Sherry, August 20, 1994.  I am proud to share this day with Robert Patrick Bleier from Appleton, Wisconsin.  Here's to you Rock.  Here's to both of us.