IX-Casey Hampton has been one of the top players at his position for the better part of this decade so when he compliments an offensive lineman I tend to take notice.  Take for instance Hamptons' endorsement of former swing tackle and possible future starting right guard, Trai Essex.  In an article with Gary Dulac from the Post Gazette Hampton and offensive line coach Larry Zierlein have both been very impressed with Essex throughout camp and the preseason, especially considering his switch from the left side of the line to the right.

X-I had never heard of the magazine "WHIRL" before today, but perhaps some of you who live in the Pittsburgh area might be more familiar with the style and arts magazine for the greater Pittsburgh area.  They did a really well written profile on Hines Ward, and according to their website they will be doing additional profiles for other Steeler players.  Probably the coolest thing is this picture of Hines wearing both Super Bowl rings. 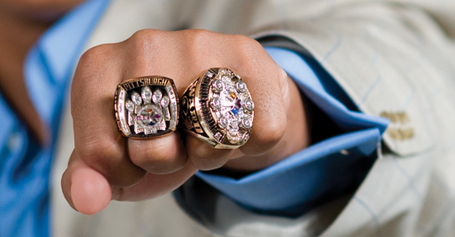 XIII-AOL Fanhouse has some excerpts from emails that were sent by Andrea McNulty the accuser of Ben Roethlisberger in his civil trial.  Roethlisberger's defense team is releasing these emails and chat sessions as an attempt to have McNulty's case dropped.  This whole case is bizarre and seems like it could be a made-for-tv-movie.

X-The guys over at IHeartPGH are trying to raise funds for a Steelers bar tour across the country to meet and interact with Steeler fans throughout the nation.  It sounds like a wonderful Idea and I will probably throw them a few bucks just to help the cause, you can donate money to their cause yourself by clicking here.  Someday when I have no family or work responsibilities I will have to organize a BTSC version of the Steelers bar crawl.

XL-I personally think the NBC production of Sunday Night Football is clearly head and shoulders above the rest of the networks.  It looks like the NFL owners like something about it too, as they have extended the contract of NBC by an additional two years according to a report from Profootballtalk.  Although NBC may want to watch out as I think the ESPN production was immediately improved 100% with the addition of John Gruden who has been great in both of the games I watched him do color commentary for.

XLIII-James Walker of ESPN AFC Northh wrote an entry on the Steelers patience in developing Limas Sweed and William Gay.  Mike Tomlin has the best qoute in the article, which is probably no surprise to anyone reading this as my man-crush for Mike Tomlin makes me a sucker for his lingo.  Here Goes:

"Really, it's what we expect from him, we're not going to be pleasantly surprised by production from that young man or any of them for that matter. There's a standard of expectation that we have and we expect them to exceed it. I thought (Sweed) did a pretty good job."