IX-According to Ben Roethlisberger the right foot ailment that kept him out of the second preseason game against the Washington Redskins is actually a bruise to his foot.  He and some other players were initially concerned that the injury was much more serious, perhaps even a torn Achilles.  We all know Ben likes to exaggerate his injury situations, so assuming that Ben said it was a bruise to the foot, I would assume more along the lines that he was stung by a bumble bee.

X-Check out this dog. 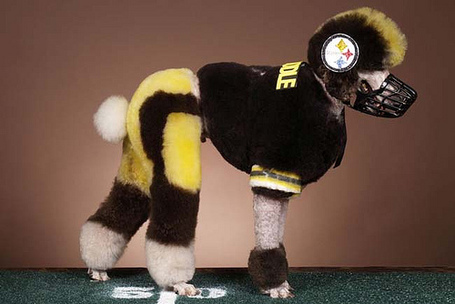 XIII-Big Ben's legal team has decided to seek sanctions against his accuser's attorney in an effort to have the case dropped.  The emails that have surfaced along with multiple co-workers coming forth to discredit Ms. McNulty gave Roethlisberger's team an opportunity for this legal strategy.  I am not going to try to pretend I know all the legal ramifications so I will rather point you in the direction of Mike Florio from Profootball Talk for a little bit better understanding of what this all means.

XIV-Saturday night the Steelers will play their third and likely most important preseason game of the year at Heinz Field with the Starters hopefully playing much longer than they have in previous preseason games.  The Tribune Review wrote an article about the importance of this preseason game for the starters as well as some of the bubble players.  Some of the starters like Willie Colon said they address this game like a regular season game, so I am assuming that means he plans to have multiple egregious false start penalties.

XL-Steelers Depot thinks that Frank "The Tank" Summers was hyped up too much after being drafted by the Steelers in the 5th round this year.  They think he has played his way onto the practice squad and they actually think that is where he should fit in with the 2009 Steelers.  I agree to an extent and as much as I wanted Frank "The Tank" to be a Jerome Bettis with the breakaway speed of a young Willie Parker and the power and vision of Franco Harris, he hasn't been able to do quite that much in his rookie preseason.  Having said that; the biggest criticism on the BTSC boards was that Summers wasn't a fullback and didn't want to be one, but he certainly has looked very good at that position in goal-line drills so far.

XLIII-As most of you have heard Dick LeBeau was nominated to be a finalist for the the 2010 Pro Football Hall of Fame.  Here is a listing of a variety of sources and stories on the legendary coach and player.

NFL from the Sidelines