IX-The Steelers training camp in Latrobe has been attracting some notable quests over the last week or so with Kentucky Men's NCAA Basketball head coach, John Calipari joining the Steelers today to watch training camp. Yesterday R&B signer John Legend stopped by to hang out with the defending Super Bowl Champs.  Below is a picture that Legend posted through his twitter account of his nephew and himself meeting Ben Roethlisberger.  Legand also posted a short and rather dull video about his visit to Latrobe.  He is a much better at writing hit songs than he is at video blogging. 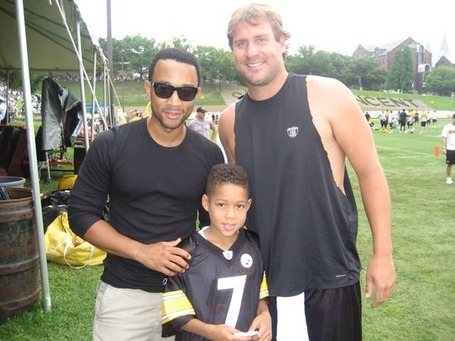 X-Darnell Stapleton has been held out of practice for the last few days due to some swelling in his knee.  He received and MRI they other day but within the Steelers organization things have been very quiet.  Dale Lolley is speculating that he may be done for the season or a long period of time at his blog.  He also speculates that we should know later today after Mike Tomlin speaks following practice.  I will update here with any new progress on the situation.

XIII-Some more great tips from PixburghArn today, including this article about the implications of the issues with the NFL's collective bargaining agreement.  Specifically the article deals with Charlie Batch, who is the Steelers NFLPA representative, and his thoughts and fears on the issue.  He is very concerned that the players aren't taking it seriously enough especially since they could be without health insurance and many other benefits as soon as next year.

XIV-Although Maryrose reported that Shaun McDonald is looking very good so far, Ed Bouchette feels he is going to struggle to even make the team as the number 5 receiver.  My gut feeling is that I agree with Maryrose's assessment, I think McDonald is a wily veteran who has sure hands and can play multiple roles in an aerial attack.  In the event of god forbid either Hines Ward or Santonio Holmes being gone for multiple games having the sure hands and veteran presence of McDonald would certainly be important.

XL-Steelguy99 has really done an excellent job of scouring the message boards of steelers blogs throughout the interwebs and finding amazingly detailed training camp accounts.  Today's obscure find comes from DraftSteel.com, with a overview of Saturdays' training camp, as well as an overview of Monday's training camp done by a user at their site by the name of vrabinec.  For all you Steeler junkies that need your fix of training camp news; this will quench your thirst for at least a few minutes.

XLIII-Reminder that I will be at Pittsburgh Steelers training camp this Friday and Saturday night along with a few other Steeler fans.  I know their are some BTSC'ers; as well as the head honchos over at PSAMP & OFTOT who have been very writing non stop since training camp has began.  If anyone else will be in attendance make sure to email me at btscmilkshake@gmail.com so that we can try to meet up.