Share All sharing options for: Hail the Rod, Spoil the Steeler Fan

Bumped back to the top of the main page as Woodson' induction ceremony draws ever close. Many thanks to maryrose for the typically outstanding post. - Blitz- (Michael B.)

If you sat down and made a depth chart of the all-time NFL team, you could easily argue a case that Roderick Kevin Woodson could be a first-team player on that team.  As we close in on the moment when Woodson is about to enter the Pro Football Hall of Fame, in his first year of eligibility, Steelers fans can chalk up another great day in the life of one of their legends.  Woodson will become the 23rd Steeler to be inducted and the 18th to be inducted as a primary Steeler.  Let's raise up our glasses, Steeler Nation.

Prior to the 1987 NFL Draft, Steelers Head Coach Chuck Noll and his defensive coordinator, Tony Dungy, would not allow themselves to drool over Woodson, since Pittsburgh had the 10th overall pick.  Woodson was projected to go in the top five.  When Dungy asked Noll if he should visit the Purdue campus in the spring of 1987, Noll told him not to bother.  The Cleveland Browns, with that fifth pick, took a guy named Mike Junkin and surprisingly, Woodson fell all the way to 10.  The Steelers could not get to the podium fast enough to take the cornerback and return specialist out of Purdue.  Woodson played in Pittsburgh for 10 seasons.  He played seven more years in San Francisco, Baltimore and Oakland.  He played in three Super Bowls for three different teams, including the 1995 Steelers. 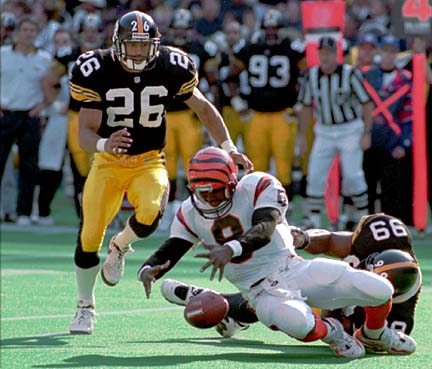 Woodson never played offense, yet amazingly scored 17 touchdowns in his career.  His 12 career interceptions returned for touchdowns is an NFL record, as is his 1,483 yards returning interceptions.  Woodson's 71 career picks ranks third all time.  He was an All Pro performer eight times and made the Pro Bowl 11 times.  With an incredible nose for the ball, Woodson recovered 32 fumbles, including one for a touchdown.  Woodson scored at least one touchdown in 12 different seasons (did I mention he never played offense?), and intercepted passes in 16 of his 17 seasons, the only shutout being the year he missed to injury.  He racked up more than 7,000 return yards in his first eight seasons.  These are staggering achievements.

It seemed like Woodson did something memorable every year.  In the 1989 AFC Wild Card Game, Pittsburgh was a heavy underdog to the high-powered Houston Oilers.  The Steelers played the Oilers toe-to-toe, taking the game into overtime, but it looked as though Houston would prevail when it had the ball near the 50-yard line.  Lorenzo White took a handoff and was cracked by Woodson, causing a fumble.  Woodson then recovered the fumble he caused.  Five plays later Gary Anderson's 50-yard field goal gave Coach Chuck Noll his final playoff victory. 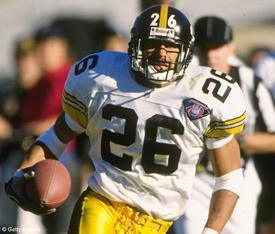 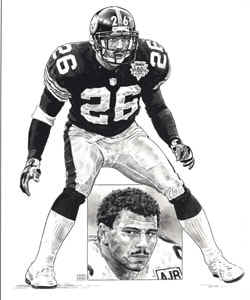 In 1992 Woodson recorded six sacks, remarkable for a cornerback.  In 1993 he was the Associated Press NFL Defensive Player-of-the-Year.  A year later he was selected to the NFL's 75th Anniversary Team, one of only five active players granted such honor.  That same year, 1994, Woodson told the defensive huddle what play the Buffalo Bills were going to run during a Monday night game.  Sure enough, Jim Kelly ran the play Woodson predicted and then chased the Steeler great into the end zone after a pick six.  In 1995, Woodson became the first player ever to recover from a torn ACL and return the same season.  He blew out his knee in the opener against Detroit and returned to play against Dallas in the Super Bowl.  Coach Bill Cowher refused to put Woodson on Injured Reserve, which would have opened up a roster spot, on the chance that Woodson would return.

Woodson ended his career with the Steelers after the 1996 season.  Dan Rooney agonized over the decision to re-sign Woodson during his free-agent year.  In a calculated salary cap move, Rooney opted to let Woodson go, surely with the knee injury in the back of his mind.  This created tension between the two, which Rooney would come to regret.  Woodson did not slow down.  You can't win 'em all.  Later Woodson and Rooney became friends again, and now the two have a great deal of respect and admiration for each other. 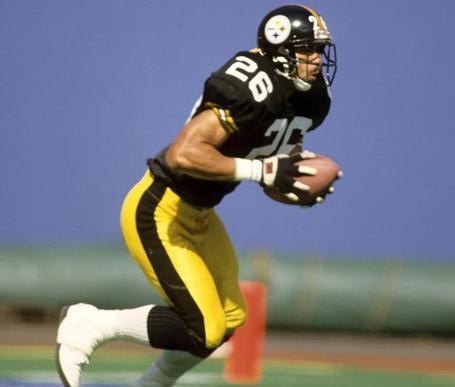 Woodson went on the play one season in San Francisco, four in Baltimore and two in Oakland.  But his time in Pittsburgh was more than all the others combined.  Unlike baseball, football players do not choose the team under which they enter the Hall of Fame.  If your career made a primary contribution to a football franchise, you will be listed under that franchise in capital letters.  Make no mistake, Rod Woodson will be listed proudly under the Steeler banner in capital letters.  Rod Woodson is a Pittsburgh Steeler, one of the greatest players in franchise history, and one of the greatest players in NFL history.  Let the Black and Gold have another glorius weekend as we celebrate another pilgramage to Canton. 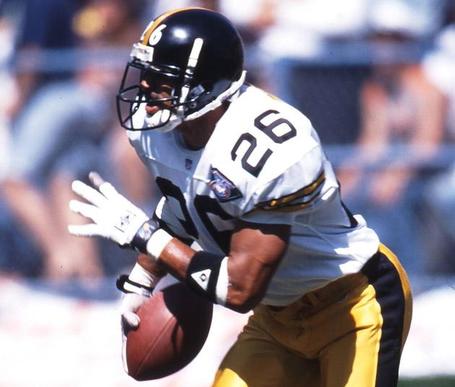