IX- I don't usually like to call out people for incorrect information because quiet frankly I make my fair share of mistakes and will sadly probably continue to do so.  I also hate the fact that the person I am calling out is somebody that I actually enjoy reading, but it has to be done.  Matthew J. Darnell a.k.a. "MJD" from Yahoo's Shutdown Corner half-assed an article on the Steelers and I feel like complaining.  MJD has been doing an offseason progress report of every NFL team and I have been waiting patiently to see what he has to say out my Pittsburgh Steelers. Unfortunately his article was just standard run of the mill stuff carbon copied stuff that contained at least a few major errors, for example:

The Steelers did draft a tackle by the name of Kraig Ubrik in the second round, and my guess is that he'll be asked to contribute at some point in 2009.

Really?  Kraig Ubrik? In the second round?  It was actually Kraig Urbik who was drafted and it was in the third round.

Larry Foote's a quality player, but you know the Steelers. There's some anonymous linebacker who's been riding pine and playing special teams for the past three years who will step in this season and make the damn Pro Bowl. I can't tell you who he is, but he's there. The Steelers always have that guy.

How bout the guy who was a 2007 first round draft pick and who split time with Larry Foote last season?  Perhaps this unknown Lawrence Timmons will have a decent year in Pittsburgh.  Also, he included Verron Haynes as a free agent loss and I don't think he has been on the roster since 2007.  And finally, could he of picked a picture that made Ben Roethlisberger look any more effeminate? Come on MJD, you can do better. 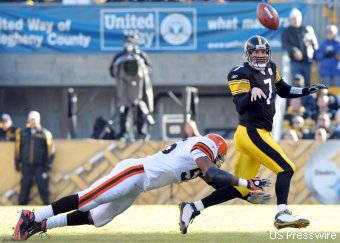 X-Now that I am done complaining about MJD I am going to go ahead and link one of his articles about the guy who has been stalking and writing threatening letters to future Hall of Famer Jerome Bettis, along with the NFL Hall of Fame, Commissioner Goodell.  This article from the Detroit Free Press goes into some more details, but the man who was hand writing the letters to Bettis once wrote the following about Bettis and his family:

"We do not want to have a gunfight with them but if we have to, we will,"

XIII-I always knew deep down that Snoop Dogg really wasn't a die hard Steeler fan.  Snoop is always seen sporting his Steeler apparel, but after today I think he should be forced to relinquish all Steeler gear immediately.  Today Snoop Dogg visited the Baltimore Raven's training camp and huddled up and rallied up the players according to Mondesis' House.  Traitor!

XIV-Troy Polamalu is a warrior on the field throwing his body around with no concern for his safety every Sunday he suits up.  In this article with Scott Brown from the Tribune Review he states that he really doesn't like competition despite his propensity to play 100% on every play.  I have put a video from the Tribune below as well.

XL-The whole Darnell Stapelton knee injury has brought to light the one quirk that seems to bother people about Mike Tomlin more than anything else, his secrecy regarding injuries.  He is much more Bill Belicheck in his approach to injuries than Steeler Nation is accustomed to and it seems to me he is only getting more and more secretive when in regards to players' injuries.  The article also states that their are at least two Steeler players who have the New Orleans Saints logo tattooed on themselves.

XLIII-Some BTSC housekeeping issues, if your not already following Behind the Steel Curtain on twitter please do so now, to get the latest breaking news from the best Steelers blog in the universe.  Also, if you haven't already purchased your copy of the Maple Street Press Steelers Annual make sure you pick up a copy here or wait to catch it shortly at your local retailer like Barnes and Noble.