IX-Wow, I am exhausted just reading about the first 33 years of Tyrone Carter's life.  According to a Post Gazette article Carter was raised by his grandmother who raised 14 other children after his parents lost custody of Carter and his four siblings due to drug use and abuse.  Shortly before Super Bowl XL Carter's wife was involved in a serious accident where she lost the use of her legs.  Super Bowl XL was also the same game that his big brother attended before turning himself into authorities to serve almost a half decade in jail.  Carter has been a solid back-up who has done a lot for the Pittsburgh Steelers since 2004 and rarely receives enough praise for his work filling in for both safety positions. 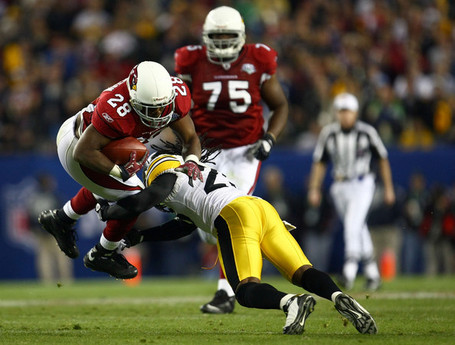 X-Steelers Depot has audio of the Mike Tomlin press conference from earlier today and it's really the first time I have heard Mike Tomlin speak for that long this year.  While listening to the press conference It struck me how respectful and calculating his thoughts are.  He is very respectful and incredibly knowledgeable of the players on every side of the ball and is very informed even on the back-up players for the Bears.  Not that this should come as a surprise as this is something a head coach is supposed to do, but it is just re-assuring to know that he's not all talk, he is amazingly prepared for all facets of the game.  Reason number 10,045 to sign Mike Tomlin to an extension.

XIII-Former Steelers special teams ace, and current Steelers West Arizona Cardinals special teams ace, Sean Morey is one of three players that has agreed to donate their brains to the Boston University School of Medicine to be studied in relation to the effects of concussions on the brain.  They other players are Raven's center Matt Birk and Lofa Tatupu of the Seahawks. I wouldn't be surprised to see more players sign on to do so as these studies could certainly help future generations of football players, athletes, and others who are affected by concusions.

XIV-It looks like Mike Tomlin has found a way to get the running game working in Pittsburgh.

XL-By now I would assume you have heard the news of Jerome Bettis trashing the Steelers running game most likely in an effort to attract attention to his new gig over at Sports Illustrated.  It seems somewhat similar to the stunt he pulled in his early days at NBC when he stated that coach Bill Cowher would retire from the Steelers after the conclusion of the 2006 season.  While I generally don't think Bettis' comments were out of line or un-truthful, I do think it was in poor taste for him to call out our a rookie 5th round draft pick for his play at a position that he hasn't played since High School if ever.  Frank "The Tank" Summers may have a long way to go in becoming a blocking fullback in the NFL, but I thought Bettis' criticism was pretty harsh and unwarranted.

XLIII-Last year I broke down and got NFL Sunday Ticket, and quite frankly aside from marrying my wife it was one of the best decisions I have made in my short lifetime.   The greatest part of the NFL Sunday Ticket on Direct-TV is the NFL RedZone Chanel which is where my TV stays on Sunday unless the boys in black n' gold are playing.  Needless to say I was a little bummed out when I heard that Comcast and other cable providers were getting a Chanel this season called RedZone, which I had assumed was just going to be the RedZone Chanel re-broadcast for free to cable viewers.  Luckily for me and my pocket-book Kissing Suzy Kolber have the reviews on the two chanels and as I expected, nobody can touch Andrew Siciliano when it comes to commenting on 9 games at one time.