I'd like to take this opportunity to diagnose a brilliant play design that Arians unleashed this week. Steelers nation often trashed him for his poor game plans and poor play calling, but I think it is clear that we are witnessing the emergence of a cutting-edge offensive mind. Lets break it down! 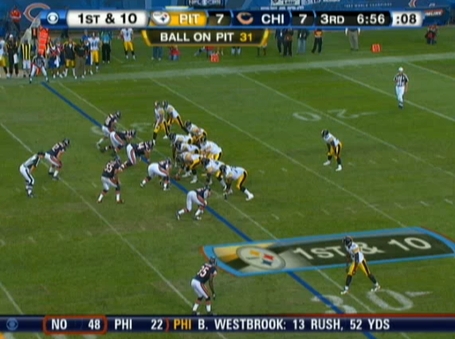 On 1st and 1, 3 WR set, 1 TE, 1 RB. For some reason the bears defense is thinking pass, and has 7 in the box. At the snap the WRs head down the field taking coverage off the LOS and opening up the running lanes. 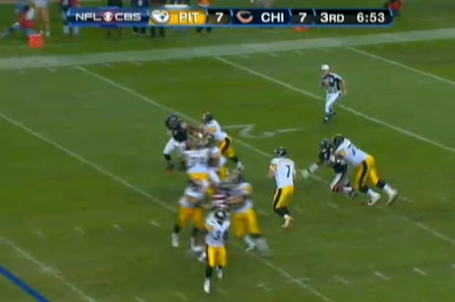 A very well executed play by the O-line. On this "pass" they allow the bears front 4 to penetrate more than 5 yards into the backfield. The clear intention of tiring the D-line out and opening the reverse running lanes is performed precisely by the 6 guys blocking. The rushers are suckered in thinking they will be able to sack Ben, and they foolishly let Mendenhall slip out onto the flat. 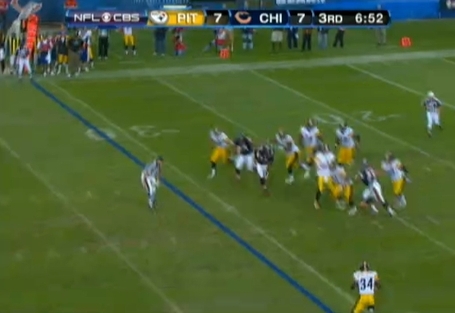 The bears D-line is not quite tired out enough here, and after the ball is thrown they immediately start bearing down on Mendenhall. They begin taking angles that will enable them to pursue downfield. That's where the genious starts. 34 takes his cue and "slips" falling to the ground. 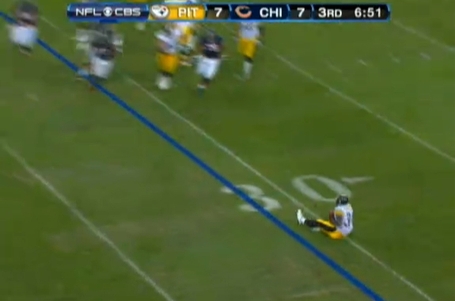 Mendenhall does a great job sitting on the sod, and all of the bears immediately have to change angles. 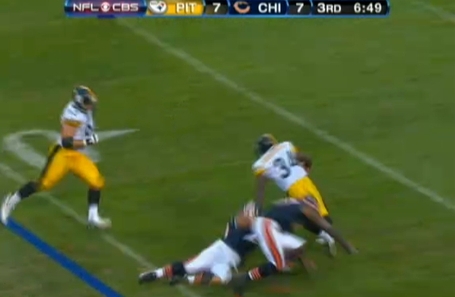 Make-em-miss Mendy sets these two schlubs up perfectly. Exhausted they fall to the ground being pursued by our expert blockers. The rest of the D-line is taken out of commission from behind by our stalwart front. Arians knew from the getgo that our blockers wouldn't be able to handle the front 4. This play sets them up by exhausting them then opening up holes that Mendenhall can see with his vision. Furthermore, it slides all of the coverage over to the left side of the field, and the bears are completely unaware that the run is designed to go all the way back to the other side for an easy first down. 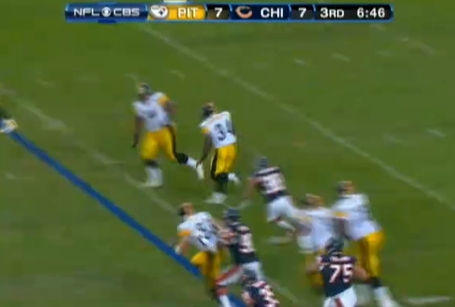 You can see four bears defenders in this shot, clearly being smoked by the play and our O-line. Another few defenders are out of the screen to the bottom. The play is going just as designed at this point, lets see how it finishes up now that we have tricked 9 out of 11 defenders. 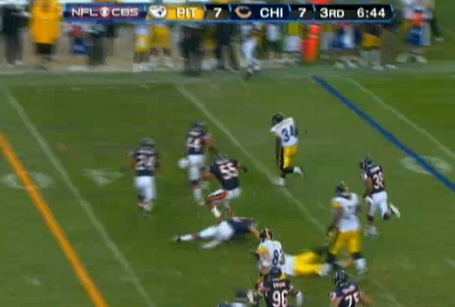 Mendenhall has a chance to break this one for a touchdown. But instead, he uses poor vision and a lack of "fight" and instead chooses to get tackled by three defenders. If Mendenhall had more heart like Moore I would expect this run to go the distance. It's not in the picture but I believe if you were to look upfield you would see Mike Wallace not putting any effort into his block. If he would have worked over that guy we might not have even had to rely on Mendy's vision.

I hope this breakdown gives a clear example of the exciting new plays we can expect to see in the future. All in all I am extremely impressed with the execution and design of this play. If we can use more of this type of trickery it can only help us win more games. It would be nice to be able to run straight-up more, but it was clear from this game that the O-line was completely unable to create gaps for running backs to run through. Fortunately, there are a lot devious things the steelers can do, like the Butt-Flop Reverse (BFR), that can take advantage of a defense that is dominating the matchups.