IX-BTSC frequenter WolfpackSteelerfan has posted another solid entry at his site, Checking the Numbers.  His entry is a recap the week two game versus the  Bears, and he breaks down the Steelers and Bears defense during the game and the Steelers are actually looking pretty good via his analysis despite the lack of pressure and turnovers that really frustrates us Steeler fans who live for the big impact plays.  Although, Ron Cook of the Post Gazette doesn't seem to think the Steelers' defense deserves any credit.

X-Ben Roethlisberger holding onto the ball too long used to be an opinion that his critics would state about him when they were dissecting why he is not an elite quarterback in the NFL.  But at some point in the last few season this turned from an opinion into some sort of truth that will be etched on his tombstone along with some smart-ass comment about him fixing the T.V.  But AOL Fanhouse has decided to take this "truth" and is going to try and find out what kind of merit it has.  You will be surprised by the early results of their "study" although the sample size is so small right now that the data is completely irrelevant. 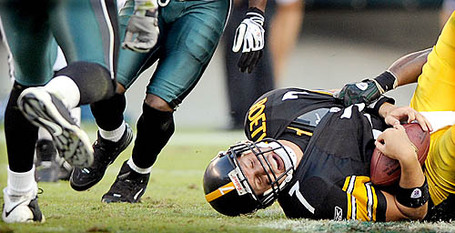 XIV-The Wildcat before the Wildcat was Kordell "Slash" Stewart and Pittsburgh fans who have the versus network will be able to watch Kordell in all his glory this year where he will in the broadcast booth for games in the upstart UFL league.  Kordell will be joined by Heisman trophy winner and underrated former NFL player Doug Flutie.  Kordell & Flutie are responsible for two of the most memorable plays in college football history, but they were not quite good enough to find that success in the pro-game even if it was opportunity or circumstance that prevented it.  But it is certainly ironic that they will be calling games for a bunch of guys that can't make it at the next level.

XL-One decent run and we already have a running back controversy in Pittsburgh?  The success of fellow running backs taken in last years draft like Chris Johnson, Jonathan Stewart, Felix Jones, and even Matt Forte have definitely overshadowed Mendenhall in terms of national media attention but Rashard is still very young and has a little bit of time before people start applying the "B word" when referencing his name.  Hopefully his performance in Chicago will get him some more touches.

XLIII-Former Steeler and N.Y. football Giant, Plaxico Burress began his two year prison sentence yesterday after he was sentenced by the N.Y. City Court.  Will Plaxico Burress ever suit up on Sunday in the NFL again?  Plaxico will be eligible for parole after 20 months in prison, but could still face more suspension from the National Football League.  Average NFL players rarely get a second or third chance, but physical freaks like Plaxico are often awarded more chances than they deserve.  If he is re-instated by the league I would be surprised if he didn't sign with a NFL team when he is eligible.