Share All sharing options for: Steelers Post-Game Review: The Offense, Part 1 of 2

Let's put last Sunday's loss to the Bears behind us tomorrow and begin to look ahead at next week's divisional game against the Bengals, but I wanted to first write about what I saw out of the offense, starting with quarterback Ben Roethlisberger. There was plenty of good and plenty of bad alike in Sunday's loss, but for the second week in a row, I felt Roethlisberger more than did enough to help lead his team to victory. He made a few mistakes - the interception in the 1st quarter, and the sack he took in the 4th quarter right before Jeff Reed's first missed field goal attempt. And Roetthlisberger uncharacteristically missed open receivers more than once. But accuracy has never been an issue really with Big Ben. Decision making has though, and once again, I thought he did an admirable job protecting the football while still making assertive, confident decisions in and out of the pocket.

Analysis: I thought Ben Roethlisberger played a pretty clean game against the Bears. Obviously he had a tremendous start to the contest, leading the Steelers down the field on a 13 play, 92-yard drive that consumed just over 8 minutes of game clock. After missing Holmes on his 2nd attempt of the game, Big Ben connected on his next seven passes on the drive. Credit Bruce Arians for drawing up an excellent first series that featured completions to five different Steelers receivers (Ward, Holmes, Miller, Moore, Spaeth). Credit Arians as well for his nicely designed 4th and goal play from the 1 yard line. 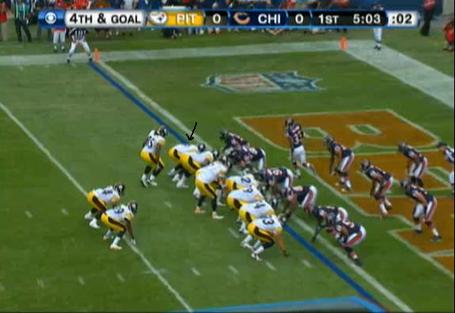 Spaeth is highlighted above. David Johnson is in motion, with Tank Summers and Willie Parker in the backfield. 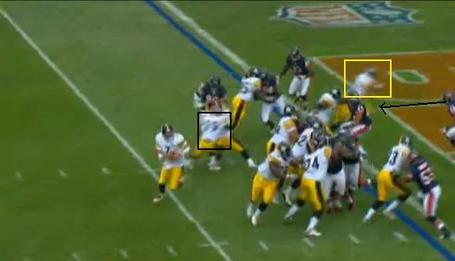 Big Ben fakes the handoff to FWP and rolls to his right. The Bears linebacker above has his eyes and his weight pointed in the direction of the Steelers backfield. Spaeth meanwhile has a full head of steam slipping to the back of the end zone. 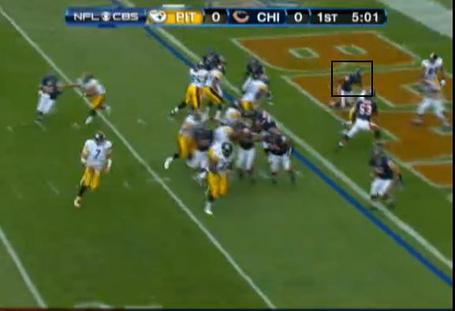 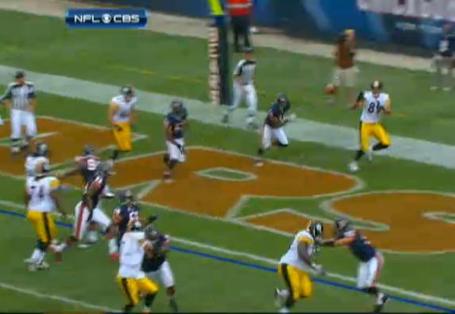 By the time Chicago's defender has realized it's play-action and that he has an assignment dragging towards the back corner of the endzone, it's too late. Big Ben has seen Spaeth and aptly gets rid of it before the gap can be closed between Spaeth and the defender. 7-0 Steelers.

Big Ben picked up right where he left off when the Steelers got the ball again following a Bears punt. Ben hit his next three passing attempts, including a gorgeous 3rd and long conversion to Hines Ward over the middle for 21 yards. At that point, Ben looked better than ever and Pittsburgh was knocking on the door again at the Bears 38 yard line. It appeared as if the Steelers were going to get at least 3 points there and really turn up the heat on Jay Cutler and the Bears offense to play from behind.

Then Big Ben threw a momentum changing pick. I originally wrote that I thought Big Ben had perhaps gotten a bit greedy and gone for the homerun ball to Wallace after going through his progressions. Turns out that wasn't quite the case. Let's take a look at what happened instead. 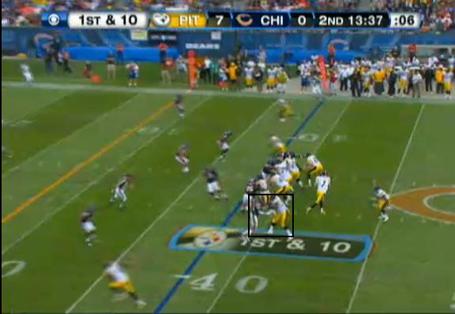 As we see here in the opening frame right after the snap, left tackle Max Starks is lined up pretty far outside - at least in comparison to where the rest of the play in the trenches is unfolding. It's pretty hard to see from this angle, but there's a good three or four yards between Starks and the left guard. At this point, Willie Parker has to see that Starks doesn't need any help chipping his man if he takes him wide. Big Ben would have had plenty of time and room to step up in to the pocket if that happened. Instead, he has to see that open space and figure that Starks' man is going to duck inside. 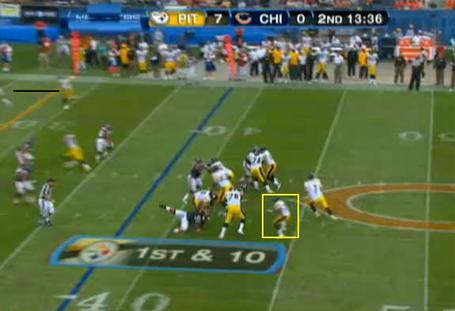 Parker misses the read though and has already begun to shade to his left rather than to step up in to the hole where there's the most glaring need for an extra body in front of Ben. Roethlisberger has already made up his mind to go deep at this point but in the National Football League, things close down in a split second and he has a man in his face disrupting his throwing motion before he can do anything about it.

I might also point out though that Charles Tillman is already in full-fledged retreat mode and is kicking it into high gear knowing Wallace's speed. In other words, Wallace does not at all have Tillman in a compromised position when Big Ben decides to throw it to the endzone. Not a good decision by Roethlisberger. But perhaps even more importantly, Willie Parker has to do a better job picking up the pass rush. He's a veteran and should know these kinds of tendencies and subtleties by now, even if it all is unfolding extremely quickly in real time.

Roetlisberger struggled with his accuracy for the rest of the game. He completed just three of his next nine passes before hitting Matt Spaeth for a 9 yard completion early in the 3rd quarter. It's worth noting that the rain started to come down fairly heavily during the 2nd quarter. Coach Tomlin would dismiss this as relevant, but it was undeniably obvious that Roethlisberger was suddenly missing on throws he usually makes easily. He missed Santonio Holmes on a few passes -

Big Ben did however make several impressive plays with his legs during the rest of the contest. The first came on a naked bootleg along the goal line at about the 5:30 mark with the score tied at 7-7. Again, a nice play call from Arians. 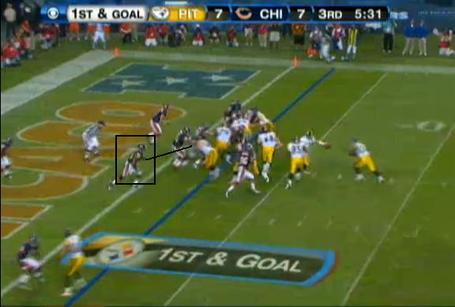 A convincing ball fake by Big Ben, sucking the Bears outside linebacker in just enough to where he won't be able to catch Big Ben in time as he sprints to the goal line. 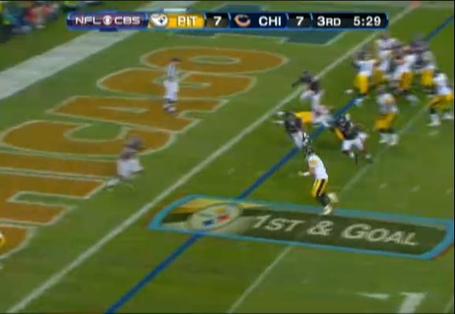 There is one defender, Danieal Manning, who still very much has a play on Big Ben.  Still, I like Ben's chances in the open field with an under-sized defensive back more often than not. 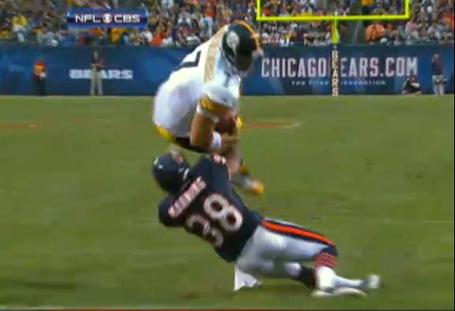 And that's why Big Ben is more than just an upper echelon quarterback in this league. He's a football player. While the Bears defender goes low, afraid to take Big Ben head on, Roethlisberger leaves it all on the field and sacrifices his body. By jumping over the top, the collision he takes with the other non-pansy Bears defenders pushes him over the goal line. That's our quarterback - one of the absolute best competitors in the league.

Roethlisberger made yet another big play with his legs when he converted a huge 3rd and 5 on the Steelers final drive of the game. There was 4:11 left on the clock and Pittsburgh had it on the Bears 38 yard line. 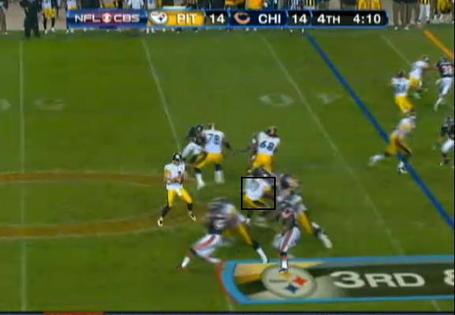 If you ask me, it's fairly problematic that we seem to feel most comfortable with Mewelde Moore in these late-game situations, but notice here how he does a nice job with his pass protection assignment, sticking his nose right in there and giving Ben enough room/time to decide what to do with the ball. 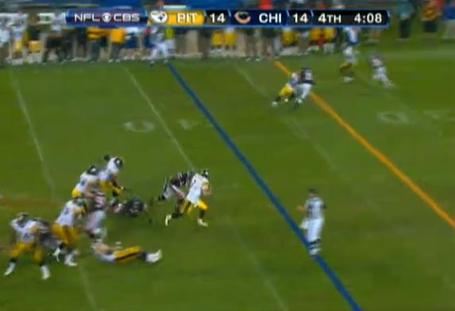 Ben decides to take off after noticing there's no defenders near the first down marker. There is however a Bears defensive lineman in hot pursuit. Big Ben kicks it in to high gear... 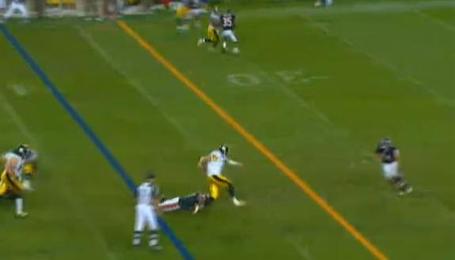 But he also instinctively knows that he needs to raise his legs as Anderson dives for his feet. 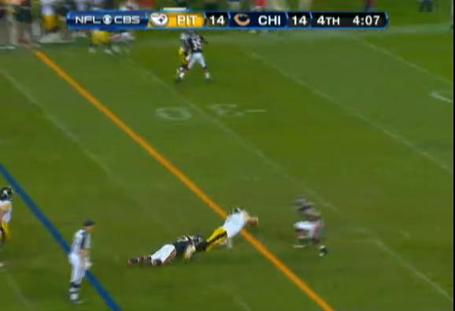 Roethlisberger then gives up his body once again stretching for the first down marker. He gets it by the nose of the football and the Steelers should have been in business to close the deal.

In conclusion, no matter what concerns we might have with the 2009 version of the Pittsburgh Steelers, I think we all have to feel fairly confident and comfortable that we have Ben Roethlisberger occupying the most important slot on an NFL roster - the quarterback position. He's been very, very good through two weeks of this year. And his solid performances have come against two good, if not great, defenses. The Titans and Bears certainly can be thought of as solid rush defenses, even if they've had their struggles defending the pass.

Anyway, if Roethlisberger can play at this high level for the remainder of the season the Steelers will be just fine. He's protecting the ball better than he did last year, he's getting more time from his offensive line to survey the field, he's still got that magic late in games and he's proven that he's healthy enough to make plays with his legs when there's no better options at his disposal. In short, he's playing like a franchise quarterback. If the other facets of the team continue to improve - even just incrementally - then the Steelers should again find themselves in playoff contention and have another shot at making a playoff run like they've been able to do with Roethlisberger under center in 2005 and 2008.